Walleye save a fishing day: Tasty fish take the bark out of dog days 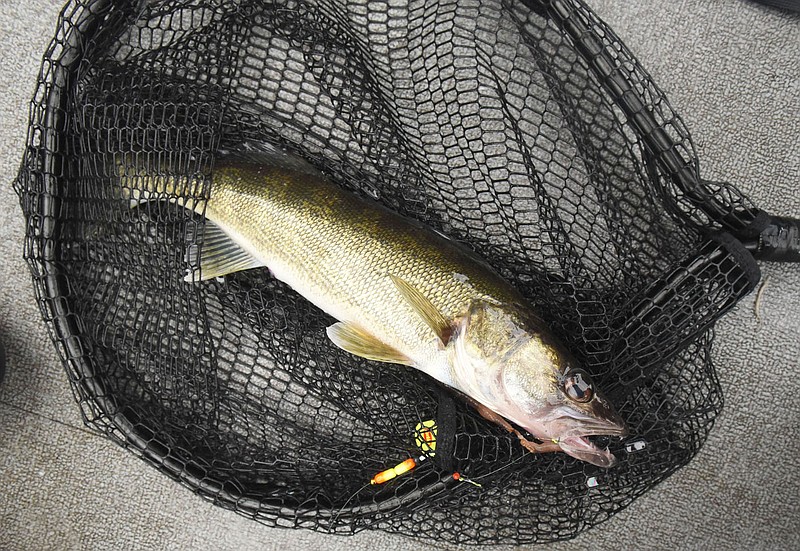 Walleye are eager to bite during summer when fishing for other species is tough. (NWA Democrat-Gazette/Flip Putthoff)

Who'd have known 20 years ago that one day walleye would be among the most popular sport fish at Beaver Lake?

Maybe the Arkansas Game and Fish Commission fisheries staff saw that vision. Game and Fish started the big push to get native walleye reestablished at Beaver in 2003. Walleye were prevalent in the White River before the lake filled. The new reservoir took away most of the gravel shoals walleye need to spawn.

It took several years of raising walleye at the Beaver Lake nursery pond and stocking them in the lake for walleye to get a foot hold. The effort was a huge success. Today, walleye are a revered game fish at Beaver Lake.

Even five years ago, most walleye were caught accidentally by anglers fishing for black bass and other game fish. Nowadays, legions of fishermen hit the lake specifically to catch walleye. These tasty fish with sharp teeth reproduce well on their own, but Game and Fish still stocks them to boost their numbers.

Talk about a fish that has saved the day, at least a summer day. When Beaver Lake heats up in midsummer, fishing can be tough as nails for black bass and crappie. That's right when summer walleye fishing kicks into high gear.

The catching is excellent right now and should go gangbusters until the water cools in mid-September. Walleye are eager to bite, and there are so many ways to catch them.

Troll with deep-diving crank baits or jerk baits. Fish vertically with a jigging spoon. Thread a live nightcrawler on a drop-shot rig and hang on.

The king of walleye rigs is trolling with a nightcrawler rig behind a bottom bouncer. Say what?

A bottom bouncer is basically an L shaped weighted wire of one or two ounces. A nightcrawler rig, also called a harness, is a 2- to 3-foot length of fishing line with a loop on one end and a small spinner and two hooks on the business end. A live nightcrawler is threaded on the two hooks so the worm is somewhat straight.

Robert Smith of Hickory Creek put on a walleye fishing clinic in 2019 when we teamed up on a story for NWA Outdoors. To see a video with Smith showing exactly how to troll a bottom bouncer and nightcrawler rig, search Northwest Arkansas Democrat-Gazette walleye video. There you'll see the video, "Walleye Fishing at Beaver Lake" right there for the clicking. Watch the 3-minute clip, and you'll be psyched up to catch your own walleye.

Schools of walleye don't prowl the depths at every point. If fishing one point doesn't produce, try another. An evening on the lake in late July with my neighbor, Bruce Darr, proved that point big time.

We trolled 45 minutes at one of Darr's walleye honey holes near Rocky Branch park without a bite, even though his depth finder showed lots of fish, probably walleye, hugging the bottom.

Undaunted, Darr motored to another gravel point. We didn't have a nighcrawler in the water five minutes before Darr winched in a beautiful 20 inch walleye. Walleye must be 18 inches or longer to keep at Beaver Lake. The daily limit is four.

By sunset three walleye finned in Darr's livewell. The shortest was 20 inches and the longest 23. We lost another solid keeper right at the boat.

That's one fine evening of fishing in anybody's book.