Get the shot, more employers ordering 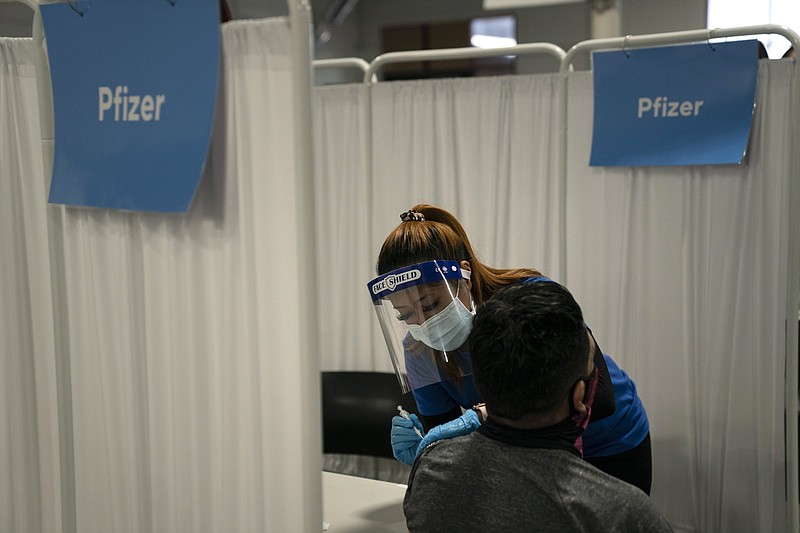 FILE - In this May 21, 2021, file photo, licensed vocational nurse Angeline Gabuten administers the Pfizer COVID-19 vaccine to a patient at Providence Edwards Lifesciences vaccination site in Santa Ana, Calif. From Walt Disney World and Chevron to CVS and a Michigan university, a flurry of private and public employers are requiring workers to get vaccinated after the federal government gave full approval to Pfizer's COVID-19 vaccine.

From Walt Disney World and Chevron to CVS and a Michigan university, a flurry of private and public employers are requiring workers to get vaccinated against covid-19 after the federal government gave full approval to the Pfizer shot. And the number is certain to grow much higher.

For the past eight months, coronavirus shots were dispensed in the U.S. under emergency authorization from the Food and Drug Administration. Some workers and unions objected to getting the vaccine -- and some employers were reluctant to require it -- because it had yet to receive FDA full approval. That happened on Monday.

[Video not showing up above? Click here to watch » https://www.youtube.com/watch?v=BqCAwrcsIoI]

"The FDA decision takes that off the table," said Devjani Mishra, a New York-based attorney with the firm Littler Mendelson, which specializes in workplace matters. She and others in the worlds of business, law and health predicted more companies will mandate vaccines for their work forces.

Shortly after the FDA acted, Walt Disney World reached a deal with its unions to require all workers at its theme park in Orlando, Fla., to be vaccinated by Oct. 22. The move came several weeks after Disney announced a vaccine mandate for all salaried and nonunion hourly employees in the United States (An email to Disney was not immediately returned.)

CVS Health, which owns a chain of nearly 10,000 retail pharmacies, as well as the health insurer Aetna and pharmacy benefits manager CVS Caremark, said it will require nurses, care managers and all corporate staff to be fully vaccinated by Oct. 31, and all pharmacists working in its retail stores to be vaccinated by Nov. 30.

Goldman Sachs told employees Tuesday that it would require anyone who entered the bank's U.S. offices, including clients, to be fully vaccinated starting Sept. 7, making it the most prominent Wall Street bank to issue such a broad requirement.

The bank, which employs roughly 20,000 in the United States, is reinstating mask requirements throughout office common areas as of today.

Oil giant Chevron Corp. said Monday it will require some of its workers -- such as those who travel internationally, live abroad or work on its offshore platforms in the Gulf of Mexico -- to get their covid-19 shots. The company said its decision predates the FDA approval.

"We pushed 'go' when the FDA made that decision," said Ora Hirsch Pescovitz, president of Oakland University in Rochester, Mich., which announced on Monday that its 800 faculty members, 1,500 staff members and 18,000 students will have to be vaccinated. Before that, only students living on campus had to get the shot.

She said the university could have legally mandated vaccines before the FDA decision but waited for it because Pescovitz, who is a pediatrician, believes the authorization will help convince those still on the fence.

On Monday, health experts expressed hope that the FDA's action would boost the U.S. vaccination rate, which bottomed out at about a half-million shots a day in July -- down from a peak of 3.4 million a day on average in April.

The number of shots dispensed has since climbed to about 850,000 a day amid growing alarm over the highly contagious delta variant, which has sent deaths, cases and hospitalizations soaring, wiping out months of progress.

Littler Mendelson released a survey Monday showing that 9% of employers are already mandating vaccines for at least some of their workers, and an additional 12% are planning to impose some sort of mandate in the near future. In January, just 1% of firms Littler Mendelson surveyed had issued vaccine requirements.

There is a risk for employers at a time when many are struggling to fill openings and workers are confident of finding better jobs: Faced with a vaccine requirement, an employee might "say, 'OK, fine. I'm leaving,'" Mishra said. "It's not a given you're going to be able to fill that job with someone who is vaccinated."

The nation's two largest private employers don't seem to be budging. Walmart said Tuesday there is no change to its policy, which requires vaccinations for office workers but not store employees. And Amazon, which doesn't mandate vaccines for any of its employees, did not respond to a request for comment.

As for the auto industry, Ford Motor Co. said it is not requiring the vaccine, and General Motors has said it isn't either, though Chief Executive Officer Mary Barra has held open the possibility.

Information for this article was contributed by Paul Wiseman, Joseph Pisani, Carla K. Johnson, Anne D'Innocenzio, Tom Krisher and Ricardo Alonso-Zaldivar of The Associated Press; by Jena McGregor of The Washington Post; and by Lauren Hirsch of The New York Times.