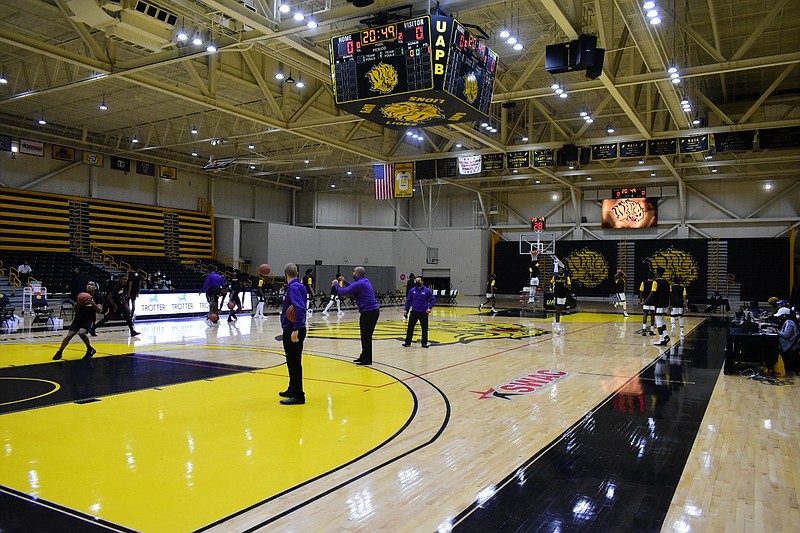 H.O. Clemmons Arena at the University of Arkansas at Pine Bluff is pictured on Jan. 25. (Pine Bluff Commercial/I.C. Murrell)

UAPB has announced Dakota Brasher, Cameron Henderson and Sherrer as assistant coaches and former Golden Lion Christian Robertson as the director of player development. Brasher was a graduate assistant at Oral Roberts University, where Bozeman served as an assistant under Paul Mills the past three years; Henderson worked the past three years as assistant coach at the University of Central Oklahoma; and Robertson spent time playing professionally in Armenia.

Sherrer was a four-year varsity player and three-time all-state selection under his father Wayne at Monticello from 2002-06. He played at Three Rivers Community College in Missouri and was team captain, earning NJCAA Region 16 player of the year honors and leading the Raiders to the 2008 national semifinals. He then became team captain at the University of South Alabama and ranked eighth nationally in free throw percentage at 90.1% during the 2009-10 season.

Sherrer was an assistant at Murray State University in Kentucky from 2011-14, coaching NBA draftees Isaiah Canaan and Cameron Payne, and worked the past seven years under 1,300-game winner Gene Bess and then Brian Bess at Three Rivers, winning 128 games and a Region 16 championship. Sherrer is credited with recruiting four junior college All-Americans and 37 four-year players, 19 of whom signed with NCAA Division I programs.

Brasher assisted with video operations, scouting and player development at ORU, where he earned a master's degree. He was student manager at Indiana University from 2014-17, seeing the Hoosiers win the 2016 Big Ten regular season championship.

Henderson helped Central Oklahoma win 88 games the past six seasons. Prior to his time in Edmond, the Little Rock Hall High School graduate was an assistant for three years at alma mater Connors State College in Oklahoma, helping the Cowboys go 79-18 and reach the national tournament twice during that span. A two-time all-region performer at Connors, Henderson lettered two years at Montana State University.

Robertson played at Jones College in Mississippi and had a key role on UAPB's 2017-18 Southwestern Athletic Conference runner-up team. He played in Armenia's top league, winning the A-League championship, finishing among the top 10 in scoring and earning all-star honors as well as runner-up finishes in the Eurasian League and Armenian Cup.

Robertson was previously CEO at Grind & Advance LLC, which helps athletes train on the high school, Division I and NBA and NFL levels.