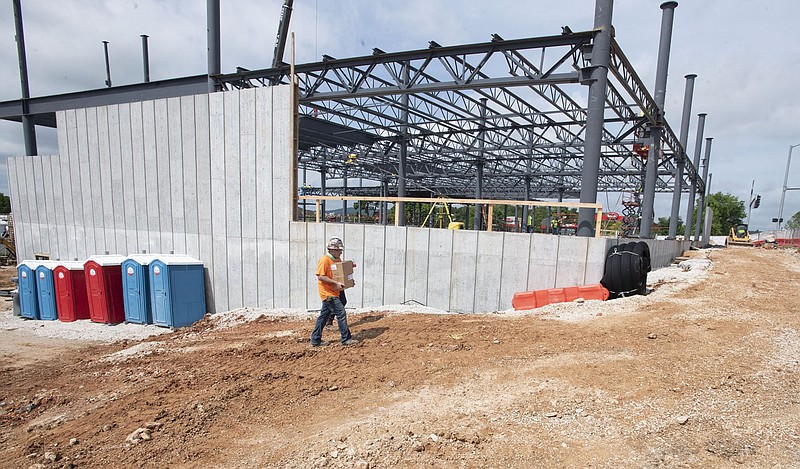 Construction continues Tuesday June 8, 2021 at the University of Arkansas School of Art Windgate Studio and Design Center building at the corner of Martin Luther King Blvd. and Hill Ave. in Fayetteville. The building will be ready for students and faculty in the fall of 2022. There will be studios, critique and gallery spaces and nontraditional classrooms. The project was paid for with a 40 million dollar gift from the Windgate Charitable Foundation. Visit nwaonline.com/2100609Daily/ and nwadg.com/photo. (NWA Democrat-Gazette/J.T. Wampler)

The latest grant follows an earlier $40 million gift from the Little Rock foundation, with the money going toward visual arts facilities at the heart of what's called the Windgate Art and Design District.

Back in fall 2016, UA's art department had about 340 students, according to data previously provided by Jeannie Hulen, an associate dean in UA's Fulbright College of Arts and Sciences and a longtime ceramics professor.

But that was before the biggest arts gift, a $120 million grant from the Walton Family Charitable Support Foundation, announced in August 2017, that effectively launched a new era. The Walton gift established UA's School of Art and provided resources to hire more faculty, start new academic programs and support students with scholarships.

The Windgate grants, meanwhile, are providing the bulk of money used to build art facilities at the art and design district, located on and just south of Martin Luther King Jr. Boulevard. The commercial thoroughfare connects the visual art buildings to the main university campus, about four blocks away.

The new Windgate grant will be made available once the university raises $7 million in matching funds, according to UA's announcement, which stated a fundraising goal of $15 million.

"It shows an institutional commitment to the arts to have new state of the art facilities," Snyder said.

Construction is well underway for what a UA facilities official described last year as an approximately 154,660- square-foot, four-story building known as the Windgate Studio and Design Center. The facility is expected to open next fall and house studio art program areas including ceramics, drawing, painting and photography, as well as the university's graphic design program.

A UA official has previously said the studio and design center will cost about $55 million, to be paid for with the earlier Windgate grant and $15 million in university reserve funds.

The latest grant is expected lead to construction of a 58,000-square-foot building that would house public galleries, a 250-seat auditorium and studios for faculty and visiting faculty, along with space for other workshops.

This additional building, to be constructed near the studio and design center, would be known as the Windgate Gallery and Foundations Building, according to the university.

"We are proud to join the University of Arkansas School of Art in its next steps for expanding the Windgate Art and Design District," Patricia Forgy, executive director of the Windgate Foundation, said in a statement released by the university. Forgy said the UA School of Art's "open communications, collaboration, leadership, community engagement and commitment to art education are at the foundation of our ongoing connection and support."

The Windgate Foundation has funded arts and education-related projects throughout the state and beyond, including a $20 million matching grant to the University of Central Arkansas announced in 2019 for an arts center and a $20.3 million grant to the University of Arkansas at Little Rock announced in 2015 to build the UALR Windgate Center of Art + Design, which opened in 2018.

Todd Shields, dean of UA's Fulbright College, in a statement said the university is "honored and grateful that the Windgate Foundation has created such a wonderful space for our community and school."

The foundation is "truly a leader when it comes to arts in Arkansas," Snyder said.