After ‘difficult conversations,’ she wraps up weeklong trip to Southeast Asia by ALEXANDRA JAFFE THE ASSOCIATED PRESS | August 27, 2021 at 3:57 a.m. 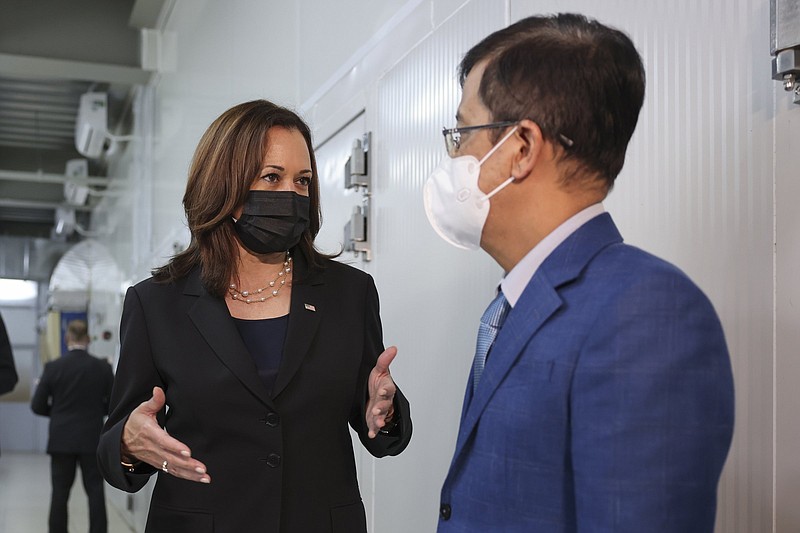 U.S. Vice President Kamala Harris speaks with National Institute of Hygiene and Epidemiology Director Dang Duc Anh on Thursday during her visit to the institute in Hanoi, Vietnam, where 270,000 doses of the Pfizer vaccine arrived earlier in the morning. (AP/Evelyn Hockstein)

HANOI, Vietnam -- U.S. Vice President Kamala Harris said Thursday that she raised issues of human rights abuses and restrictions on political activism in her conversations with Vietnamese leaders this week, but offered no indication that those talks bore fruit.

Harris said she spoke with Vietnamese leaders in particular about the release of political dissidents. Vietnam has faced criticism for restrictions on freedom of expression and in the media, and a crackdown on people it deems political dissidents. Harris didn't respond when asked why the U.S. criticizes China for similar abuses, but is seeking a stronger partnership with Vietnam.

Her comments capped a weeklong trip to Southeast Asia during which she met with top officials in Singapore and Vietnam to strengthen U.S. engagement in the region to counter Chinese influence there. Harris unveiled new U.S. agreements and aid for both countries in areas including cyberdefense cooperation with Saigon and coronavirus aid to Vietnam, which is struggling with a new surge in the virus and low vaccination rates.

[Video not showing up above? Click here to watch » arkansasonline.com/827vptrip/]

But Thursday, she turned her attention to civil liberties and human rights in Vietnam. Harris participated in what her team billed as a "changemakers" event with activists working on LGBTQ rights and climate change.

"It is critical that if we are to take on the challenges we face that we do it in a way that is collaborative, that we must empower leaders in every sector, including of course government but community leaders, business leaders, civic society, if we are to maximize the resources we collectively have," she said.

In her news conference, Harris also fielded questions on the U.S. exit from Afghanistan, but did not respond directly when asked how the U.S. would evaluate success in the evacuation mission.

She was briefed on the latest developments in Kabul and will continue to be updated as she makes the trip back to the United States, the White House said.

While Harris has emphasized that her visit to Southeast Asia is intended to foster a positive relationship with countries in the region and expand U.S. cooperation and involvement, she also ramped up Biden administration rhetoric toward China, issuing repeated warnings to Beijing to end its aggression in the disputed South China Sea.

"We need to find ways to pressure and raise the pressure, frankly, on Beijing to abide by the United Nations Convention on the Law of the Sea, and to challenge its bullying and excessive maritime claims," she said Wednesday.

Harris avoided the unscripted gaffes that overshadowed her first foreign trip, to Guatemala and Mexico in the spring, where her declaration to migrants -- "do not come" -- and her dismissal of questions about her refusal to visit the border drew criticism.

In Asia, Harris stayed focused on her meetings with officials and Biden administration talking points on China. While questions surrounding the U.S. withdrawal from Afghanistan dominated her first day in Singapore, Harris emphasized the same message delivered by President Joe Biden and his aides -- that the U.S. must remain focused on the evacuations, and not recriminations about what went wrong.

On her trip home, Harris will stop at Joint Base Pearl Harbor-Hickam in Hawaii to meet with service members. Then she'll turn her focus to U.S. politics at an event in the San Francisco area for California Democratic Gov. Gavin Newsom, who is facing a recall attempt.