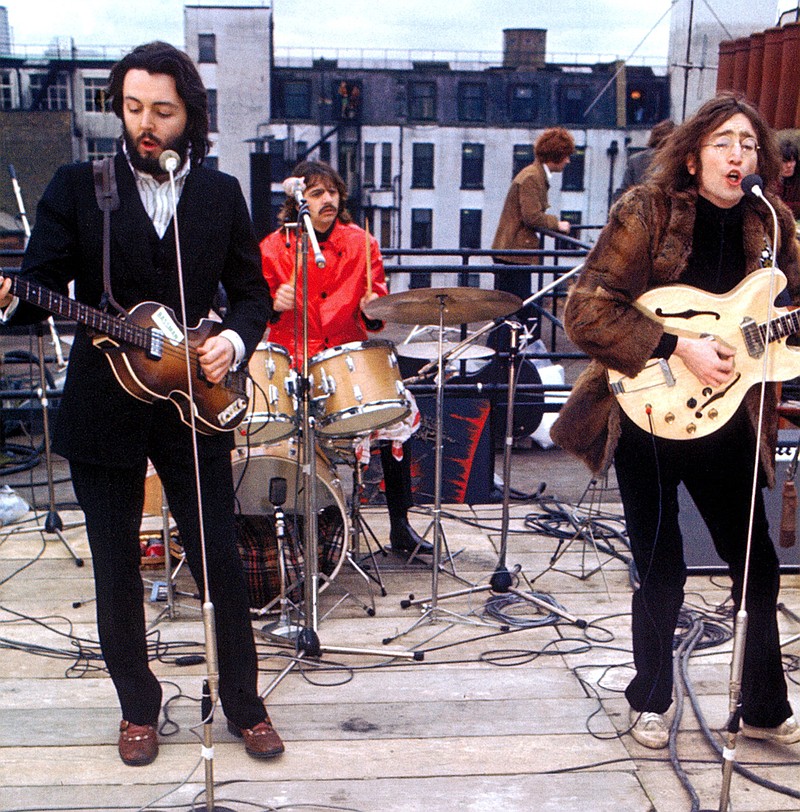 Beatles Paul McCartney, Ringo Starr and John Lennon perform up on the roof in Michael Lindsay-Hogg’s documentary “Let It Be” in 1969.

One of the pandemic projects I started and have yet to finish is a complete inventory of the movies I own on DVD.

I have quite a lot, though not as many as you might imagine. Having a physical collection of DVDs makes a little bit of sense for me because I sometimes screen movies in a classroom setting. It's just easier to have a physical copy of the movie than to figure out how to stream it.

And some films (probably most films when you really think about it) aren't that easy to find on short notice.

Take Michael Lindsay-Hogg's 1970 documentary on the making of the Beatles' album "Let It Be," for example. Lindsay-Hogg was initially engaged to film the band during recording sessions beginning in early January 1969 for a proposed television special. Though plans morphed into a feature film that's most notable for its footage of the Beatles' rooftop set on Savile Row on Jan. 30, 1969, the last live public performance of the band's career.

It hasn't been available on home video since the 1980s, and though there have been occasional attempts to release it on Blu-ray, it has never worked out. (Oh wait, while you still can't legally buy a DVD or videocassette copy of the film, you can watch it online, for free here: vimeo.com/248873535.) I don't remember how or where I got my bootleg copy of the movie (and I probably wouldn't reveal my source if I did) but I'm glad to have it somewhere in the plastic boxes that hold most of the collection. (I throw away the individual boxes and slip them into paper sleeves.)

Anyway, the last time they tried to bring out "Let It Be" on DVD was about 10 years ago. I imagine that someday it will be pretty easy to find and that no one will care about it, it having been made obsolete by Peter Jackson's project, "The Beatles: Get Back," which has now evolved into a three-part documentary series of about six hours, directed and produced by Jackson. The film was originally intended as a documentary feature to be released in September, but the pandemic caused the release date to be pushed back a few times. And it gave Jackson and his team more time to go through the 56 hours of camera footage (and more than 140 hours of audio tape) they were granted access to by remaining Beatles Paul McCartney and Ringo Starr and the estates of John Lennon and George Harrison.

Apparently what they found warranted a six-hour production. So instead of coming out in theaters today, it will be released in three parts on Disney+, with the first part premiering on Nov. 25 with the others to follow on consecutive days.

I'm excited to see how the production techniques that Jackson et al. developed to restore 100-year-old film for the World War I documentary "They Shall Not Grow Old" work with footage that's just over 50 years old. A five minute preview -- which Jackson pointedly said was not a trailer -- released earlier this year seems to promise an immersive experience with remarkable sound. I imagine it will be a big hit, driving a lot of consumers to the Disney + service and that it might even set off another boomlet in Beatle interest to transform the footage with modern production techniques.

While it's always dangerous to write too much about movies you have yet to see, aside from the technical aspects of the film, the most notable thing about it seems to be its "debunking" of the "myth" that toward the end of the Beatles was an acrimonious and dispiriting time in which the band members actively disliked one another. Apparently there is a lot of camaraderie and brotherly love on display in the footage Jackson went through. A lot of the time the band seemed actually happy while making "Let It Be."

This flies in the face of the conventional wisdom, which is that, at the end, the Beatles were barely speaking to one another.

McCartney released a statement saying "I am really happy that Peter has delved into our archives to make a film that shows the truth about the Beatles recording together." Starr concurred: "There was hours and hours of us just laughing and playing music, not at all like the 'Let It Be' film ... There was a lot of joy and I think Peter will show that."

OK, if you say so, guys, but the Beatles still broke up.

Most bands break up; that's the nature of the business and of creative collaboration. But the Beatles were the Beatles, a cultural force that remains the template for what we think of as rock 'n' roll. Much has been written about the partnership and rivalry between Lennon and McCartney, Harrison's increasing annoyance at being treated as the not-quite-ready-for-prime-time junior partner/little brother, and Starr's impatience with the bickering and having to play the peacemaker.

Lennon's insistence on Yoko Ono having some standing in the band was a factor, as was McCartney's desire to live out a simple life fantasy with his wife Linda. But the main thing that broke up the Beatles was life itself, the restlessness and ennui that successful young people invariably feel when they've accomplished more than they ever imagined they could. Nothing is fun and exciting forever, not even being a Beatle.

Lindsay-Hogg's film has, over the year, acquired a reputation I'm not sure it deserves. Lots of Beatles fan maintain a love-hate relationship with it; they appreciate it for allowing them the direct cinema experience of being in the room with their idols while things are happening, but the general idea is that it somehow makes the Beatles' look testy and sour.

I don't really think it does. Though Lindsay-Hogg does include some cringey, snappish moments, the film really portrays a working band, young men serious about their jobs trying to get some things done. It's not a great film, but it's mostly about the music (and the famous rooftop concert) and I suspect that had the Beatles soldiered on a few more years it would not have acquired the talismanic power some attribute to it. If you want to see a documentary about a band coming apart, check out Sam Jones' "I Am Trying to Break Your Heart: A Film About Wilco" (2002).

Jackson is giving us six hours with the band, Lindsay-Hogg gave us 81 minutes. Of course, "Let It Be" is going to give us a less complete portrait of its subject. It's a subjective take on the Beatles, one that has the advantage of its director actually having been in the room with the band at the time.

I expect Jackson's project to be excellent but I don't think it negates Lindsay-Hogg's film. Maybe the original "Let It Be" will even turn up in the special features of the inevitable deluxe boxed set edition of Jackson's film.