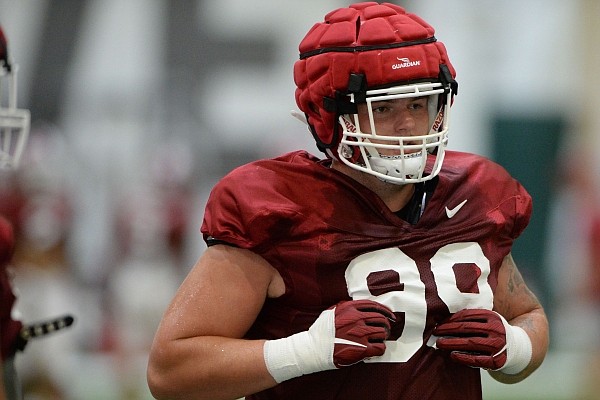 Arkansas defensive lineman John Ridgeway moves Tuesday, Aug. 17, 2021, while taking part in a drill during practice at the university practice facility in Fayetteville.

FAYETTEVILLE — Rare is the man freely admitting he wasn't so smart for his mistakes, limiting what should have been vast opportunities.

Rarer still is that same man ultimately proving so smart to be superstar courted, yet so grounded to know his supporting role.

In Bloomington, Ill., the now 6-6, 320-pounder starred as the man for all seasons named Bloomington's High School Athlete of the Year. He was All-State football, the 2017 state heavyweight wrestling champion and a track and field shotput and discus star.

They didn't. Ridgeway ended up down a division (FCS) at Illinois State.

"Coming out of high school I just slacked," Ridgeway said. "I didn't really pay attention in class. So that kind of took away my chances to get recruited. ISU took a leap of faith with me."

Upon redshirting in 2017, Ridgeway academically blossomed.

"I ended up making my eligibility to go play college football," Ridgeway said. "Went there and played there pretty well."

So well on both counts that he entered the transfer portal with a degree from Illinois State. He was recognized as a Phil Steele 2018 FCS Freshman All-American and 2019 Missouri Valley Honorable Mention.

Ridgeway played just four games in Illinois State's abbreviated 2020 season moved to the spring of 2021 because of the covid pandemic.

Recruiters from the FBS big time had seen enough.

"It was definitely fun to experience it," Ridgeway said. "I just wish I'd experienced it a younger age. It was fun for sure."

He said taking his own unofficial visit to Arkansas, accompanied by his girlfriend and dog, made him happy to become a Hog.

Ridgeway settles into a nose tackle's supporting role. For while a nose tackle's tackles are certainly appreciated, he's often most treasured for occupying an offensive line's double teams freeing the middle linebacker to make plays.

"Jon Marshall was a good D-tackle," Ridgeway said. "Seeing the way he played, I felt like I did the same thing in the FCS. So I figure my game can transition here like his did. Just keeping Grant Morgan and all of them free and make a couple plays every now and then."