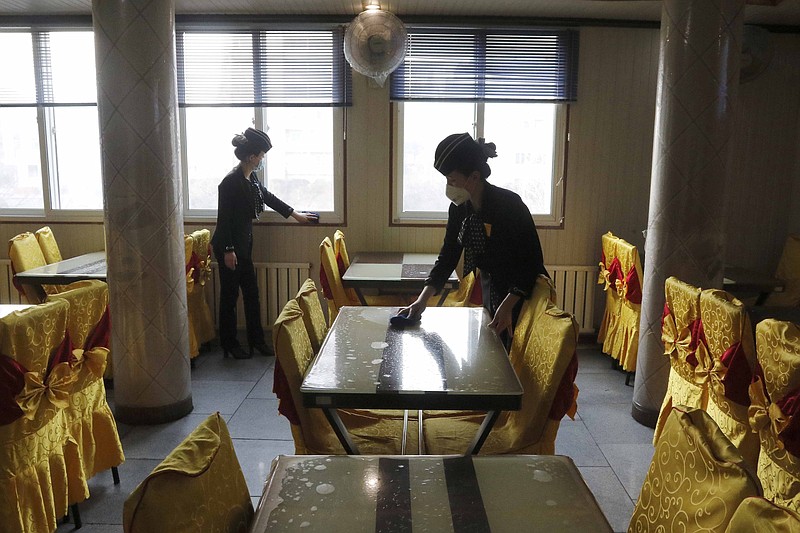 A February photo shows staffers at the Pongnam Noodle House disinfect the tables and windows of the restaurant in Pyongyang, North Korea. (AP/Jon Chol Jin)

SEOUL, South Korea -- U.N. human-rights investigators have asked North Korea to clarify whether it has ordered troops to shoot on sight any trespassers who cross its northern border in violation of the country's pandemic closure.

They were referring to a report by a news site focused on North Korea, Daily NK, which published a photo of what it said was a poster describing an August 2020 proclamation prohibiting acts that impede the closure of the northern border, shared mostly with China and a smaller section with Russia.

The poster describes a 0.62-1.24-mile buffer zone and says any person who makes an unauthorized entry to North Korea "shall be shot unconditionally." It also says trespassers from other countries found on the North Korean side of the Yulu and Tumen rivers will be "shot without prior warning."

In an Aug. 23 letter posted on the website of the Office of the U.N. High Commissioner for Human Rights, the special rapporteurs expressed concern about the reported order. They also asked North Korea to confirm reports that it made the distribution of South Korean cultural products or sexual content punishable by death under a law adopted in December.

Daily NK published photos of a document that supposedly spells out the law, aimed at precluding "reactionary thought and culture." The site said the law prescribes the death penalty for import or distribution of cultural contents from South Korea and other "hostile" nations such as the United States and Japan and does the same for sexual material.

"We are concerned over the shoot-on-sight policy for unauthorized entry into the buffer zone along the northern border, as well as over the death penalty, without judicial guarantees, imposed on acts that appear to be guaranteed by international human rights law relating to the rights of freedom of opinion and expression and the right to take part in cultural life," said the U.N. letter. It asked the North to provide information on the number of executions carried out under the reported law against reactionary culture.

North Korea has never publicly acknowledged shoot-on-sight orders or executions over consumption of capitalist cultural content, and it wasn't immediately clear whether the country would respond to the U.N. letter. The rapporteurs said they would release the reply if they received one.

Army Gen. Robert Abrams, who was the top commander of U.S. troops in South Korea before retiring this year, told a forum in September that North Korea had put special forces along its border with China to keep out smugglers and that they had "shoot-to-kill orders in place" aimed at preventing the virus from entering the country.

North Korea claims to have not confirmed a single case of infection, despite widespread skepticism.