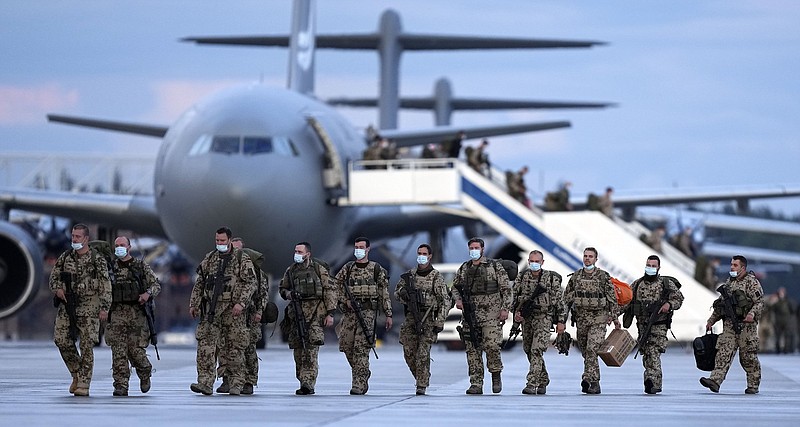 German soldiers arrive on a plane from Tashkent, Uzbekistan, at the Bundeswehr airbase Friday in Wunstorf, Germany, after they finished the evacuation mission in Kabul, Afghanistan. (AP/Martin Meissner)

BERLIN -- Thousands of Afghans who put their lives at risk to work with America's NATO allies have been left behind as the military evacuations wrap up and they hunker down in fear over Taliban reprisals.

Britain became the latest nation to announce an end to its airlifts Friday, as Defense Secretary Ben Wallace told LBC radio that evacuations would end in hours. The British military has airlifted nearly 14,000 people out over the past two weeks, but "the sad fact is that not every single one will get out," he said, with up to 1,100 eligible Afghans who "didn't make it."

Other countries fell further short of their targets. Germany, whose last soldiers flew out of Afghanistan on Thursday evening, said it had rescued about 4,000 Afghans -- far shy of the 10,000 people it had identified as at risk.

The troop departures marked a new phase of uncertainty and fear for those who worked side-by-side with everyone from foreign troops to aid workers to project coordinators. While the United States is continuing airlifts, it is focusing on its own Afghan partners and stranded citizens.

From Berlin to Ottawa, questions have been raised as to why more was not done to save those who were vulnerable sooner.

"I think humanity has fallen apart," said one employee of a local nongovernmental organization contracted by the German government, whose name has been withheld by The Washington Post after he said he was not in a fit enough mental state to decide on the risk. He shared a photo of what he said was one of his colleagues, beheaded by the Taliban when they took over his neighborhood.

"It feels as though I am so alone," he said, his voice breaking as he spoke.

European governments have said they were left with little choice but to end their military rescue operations as the United States pulls out.

Officials have said no one could have predicted the speediness of the Taliban takeover, but critics say that visa programs for those at risk were initially slow and restrictive, until it was too late.

"We left behind the people who trusted our country; it's a disaster," said French Senator Nathalie Goulet. "We will have blood on our hands."

French officials said they evacuated about 2,500 people over the past 10 days but Goulet estimates that about 1,000 people -- those who worked with the French military and their families -- remain.

"They are going to be killed," she said. "It's like a witch-hunting party. They are at the top of the list of the traitors of the Taliban because they have been working for a foreign army."

The Taliban has promised amnesty to all those who worked with the coalition or former government, but there have been reports of killings since its takeover.

Afghans who worked for France have been desperately emailing Goulet, sharing their work and identification documents and asking for her help arranging a flight out of Kabul.

One Afghan man who worked with the French military for nearly seven years and shared his proof of employment said he hasn't left his Kabul home in 10 days because he's afraid Taliban militants are searching for him.

"I am here without any support and assistance," he said, adding that he was blocked from the airport.

Sharif Karimi, 31, an Afghan translator for British forces, also said he tried to get to the airport Thursday after being approved for evacuation but was stopped by the Taliban.

"The Taliban were just beating us and warning us, 'we will shoot you ... you should leave the place'," he said, adding that he knew at least seven or eight other interpreters left behind.

"We are so worried ... Our lives are not safe here," he said in a series of video messages sent Friday morning. He said he was not concerned about having his identity hidden, as he was already in danger.

Wallace, the British defense minister, has suggested some people left behind try to get to a border. He estimates that as many as 150 British nationals were still in Afghanistan, though not all wanted to leave.

Traveling to the borders is incredibly risky, stranded Afghans said, with border crossings shut and the Taliban on patrol.

Charlie Herbert, who served as a British military commander in Afghanistan, said the evacuation crisis was "entirely avoidable."

The British government's Afghan Relocations and Assistance Policy was set up in April, and people should have been fast-tracked, he said: "Instead, the blood of my Afghan friends and colleagues is on the home secretary and defence secretary's hands."

He said he was in touch with "dozens of former interpreters left behind, abandoned, many of whom haven't been connected at all in the last two weeks by British authorities."

There have been similar issues with interpreters for Canada's army, and some veterans began paying out of their own pockets to get Afghans who assisted them during the war to safety. Canada last month announced a "path to protection" for those who were "at risk due to their work," such as cooks, drivers, interpreters, security guards and their families.

On Thursday, as he announced that Canada's evacuation effort had concluded, Gen. Wayne Eyre, Canada's acting chief of the defense staff, said the country had evacuated roughly 3,700 people from Afghanistan, including Canadian citizens and permanent residents, as well as Afghans bound for Canada or allied countries.

It's far short of the 6,000 that officials estimated would be eligible for resettlement under the program for those who assisted Canada's war effort.

"We wish we could have stayed longer and rescued everyone who was so desperate to leave," Eyre said. "That we could not is truly heartbreaking, but the circumstances on the ground rapidly deteriorated."

Information for this article was contributed by Amanda Coletta and William Glucroft of The Washington Post.