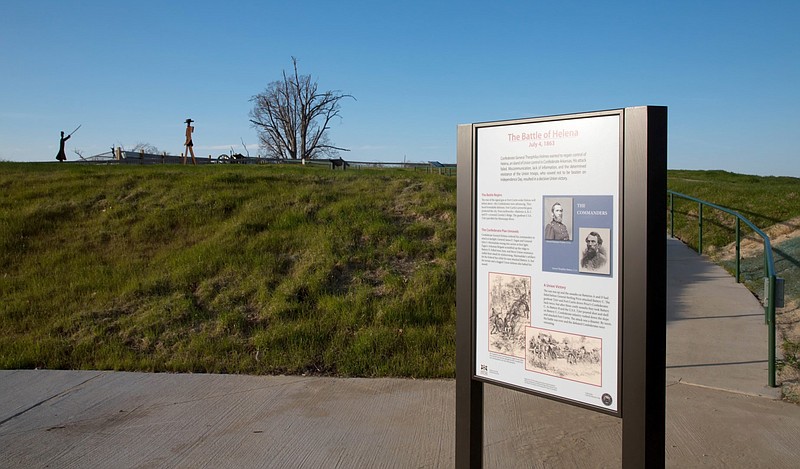 A sign details the Battle of Helena at Battery C Park in Helena-West Helena in this March 2014 file photo. Battery C was one of three batteries built south of Battery A before the Civil War battle. (Arkansas Democrat-Gazette file photo)

A house is being built on a hill in north Helena.

Normally, this is a good thing, said Kevin Smith, the mayor of Helena-West Helena.

But the mayor recently learned that the house under construction is on Battery A, an earthen fortification built by Union soldiers to protect the city before the Battle of Helena on July 4, 1863.

"I was surprised to learn that Battery A was even intact still and didn't know that until here this week really," Smith said. "I wish I'd known."

Smith, a Civil War buff, said the city could have purchased the land if he had known that it was in danger of being developed.

"I'm extremely disappointed that we went though the entire sesquicentennial here with so much focus on the Civil War without anyone coming forward to preserve a battlefield that still has gun-works on it," said Smith. "If we had done our job as a city, we would have preserved that a long time ago, and I hate that they didn't."

Smith was referring to the remnants of rifle pits on Battery A.

The hill is so overgrown with trees and underbrush that it's difficult to tell what's up there on that section of Crowley's Ridge, said Joseph Alley, curator at the Helena Museum of Phillips County.

It looked considerably different in 1863. The Union Army had cleared all the trees.

Andrew Beaupre, the Arkansas Archeological Survey's research station archaeologist for the University of Arkansas at Pine Bluff, said the landowner is working with the Survey to preserve the site.

"We are extremely happy with that because it's voluntary to do that in Arkansas," said Beaupre. "He's interested in preservation."

Beaupre wouldn't name the landowner or say whether the battery had been damaged by the construction work.

Smith said the landowner got all the proper permits to build a house on the site.

"We were excited that he was here building a house," Smith said. "It is a beautiful location. He followed the law. He did everything he was supposed to do. He grew up in that neighborhood, and he always dreamed of coming back and building a house on that spot, and he got it for a song."

Three other batteries -- B, C and D -- were built to the south of Battery A before the Battle of Helena.

Batteries C and D are protected from development, said Alley and Drew Ulrich, curator for the Delta Cultural Center, a division of Arkansas Heritage located in Helena-West Helena. Batteries A and B are privately owned, both men said in separate interviews.

There were already houses on some parts of the batteries, but not the top of Battery A.

"Battery A is more intact," according to its 1992 nomination for the National Register of Historic Places. "While residential development has approached Richtor Hill, the actual hill remains substantially unaffected and pristine. Evidence of rifle entrenchments and earthen fortifications still remain at the crest of the hill, substantially protected by the difficult terrain and substantial undergrowth."

Battery A sat atop Richtor Hill, overlooking the Sterling Road and the old St. Francis Road, according to the nomination.

Historical markers on nearby roads commemorate the sites. Alley said the markers, which date from 1963, carry a Rebel slant.

Helena was founded in 1833 and prospered as a river port.

West Helena began as a railroad town and was incorporated in 1917. The two cities merged in 2006.

According to the Encyclopedia of Arkansas, Battery B was heavily affected by residential development. Much of Battery C's dirt was taken to build the nearby Mississippi River levee. And Battery D remains much the same as it was during the war. Each battery is on the National Register of Historic Places.

The Battle of Helena was a resounding victory for the Union. The Federal army at Helena suffered 239 casualties, while the Confederates suffered 1,614.

It was a significant battle involving nearly 12,000 men.

"But the Battle of Helena has been little noted and not long remembered because it was fought the day the Confederate garrison at Vicksburg, Miss., surrendered to Grant and the day after the Battle of Gettysburg," according to the Encyclopedia of Arkansas.

Smith said he's heard some complaints about the construction taking place on Battery A, mostly from people who believe the battery was supposed to have some sort of protected status, like Batteries C and D.

"For conservationists to be outraged now, to me they're a day late and a dollar short," Smith said. "Where were they? ... I'm disappointed that this fell through the cracks."