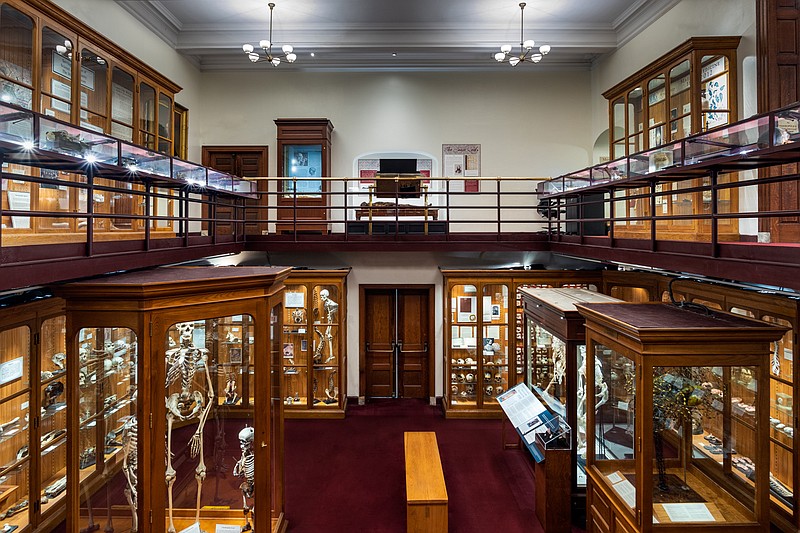 Attention-grabbing exhibits dominate the interior of Philadelphia’s Mutter Museum, a medical-history repository whose apt slogan is “Disturbingly Informed.” (Courtesy of the Historical Medical Library, College of Physicians of Philadelphia)

A doctor is the first person many of us see when we're born — and the last person we want to see any time afterward. They may represent bad news, lectures and bills so big you need more doctors to help you recover from the shock. The reality of covid-19 has made us realize, though, that health care workers are our protectors and that medical care is an amazing gift.

For the medi-curious, here are eight medical museums where you can marvel at the disgusting miracles of the human body, how it works and what happens when it doesn't, and be very grateful that you don't live in a time when someone would cure your headache by slowly drilling a hole in your skull.

Having a hole surgically bored into your skull is called trephination, and it's considered the world's first form of surgery. At this Chicago museum, you can see the skull of a Peruvian patient who survived the procedure in about 2000 B.C. and a painting, from nearly 4,000 years later, depicting how it was done. It's beautiful even when you know what's going on in it.

Opened in a former mansion on Lake Shore Drive in 1954, the museum has commissioned a great deal of medical art and remains a gold mine of artwork, artifacts and manuscripts.

"We are still big supporters of Chicago's art community," said Shannon Fox, manager of curatorial and education. The museum's artist-in-residence program features forensic sculptor Kathleen Gallo, who has given faces to the ancients who endured trephining.

One frigid autumn day in 2015, I spent hours in the cozy grandeur of IMSS browsing its innumerable treasures, including a fluoroscope, which used X-rays to see whether your shoes fit (Fox said some guests remember it from the 1950s), and obstetrics/gynecology instruments from the Roman era that look more like something you'd use to extract passengers from a crashed tour bus than delicate medical tools.

Most poignant, especially in retrospect, was the iron lung, where I overheard a dad telling his son about polio and how people don't get it anymore because we have a vaccine.

For Jake Wynn, director of interpretation for these sister museums (another sister museum, Pry House Field Hospital Museum of Keedysville, Md., is closed indefinitely due to National Park Service guidelines),the parallels between the coronavirus pandemic and the carnage of the Civil War are self-evident. During both crises, medical personnel faced — and, in the case of the pandemic, continue to face — urgent questions, such as: "How do we deal with thousands of patients who need very advanced medical treatment?"

The National Museum of Civil War Medicine, which administers the Keedysville and D.C. sites, houses a collection of artifacts, letters and papers that showcase the war's far-reaching role in the history of medicine.

The Clara Barton Missing Soldiers Office Museum is located in the Washington boardinghouse where Barton lived after the Civil War. The "Angel of the Battlefield" ran the Missing Soldiers Office from her rented rooms, finding "at least some information about 22,000 missing soldiers" for their families, Wynn said. Superstar D.C. chef Jose Andres had a restaurant just across the street from the historic boardinghouse when the connection to her was discovered. Her story would inspire him to create World Central Kitchen, which brings fresh meals to disaster victims, most recently in flood-ravaged Germany. 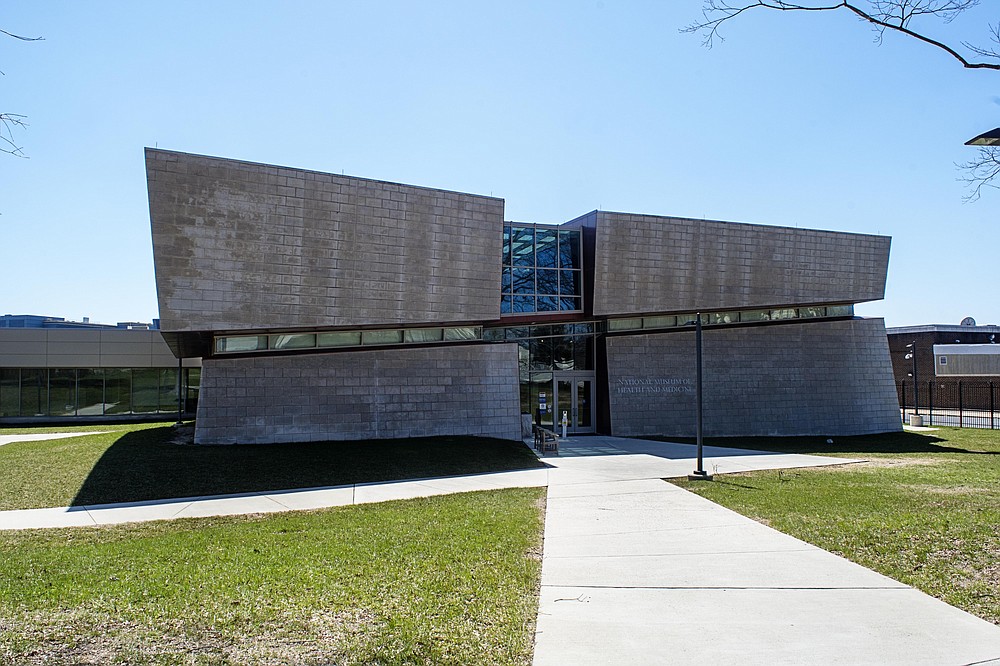 The National Museum of Health and Medicine, which relocated to Silver Spring, Md., in 2011, was founded in 1862. (The Washington Post/Marvin Joseph)

If you watch enough television, you may think you have an idea of how gunshot wounds are treated, but what about a cannonball injury? The National Museum of Health and Medicine is where you'd go to find out. The Civil War era looms large at the museum, where a popular permanent exhibit details President Abraham Lincoln's medical care and autopsy.

Other exhibits at the museum, which traces the history of medicine with artifacts both obsolete and cutting-edge, showcase more modern conflicts. "Trauma Bay II, Balad, Iraq" demonstrates how medical personnel worked from 2003 to 2007 to save the lives of wounded soldiers in Iraq. The exhibit includes "a seven-foot-wide, 3,000-pound section of concrete floor on which the most seriously wounded were treated when they arrived to the forward hospital," said Andrea Schierkolk, the museum's public programs manager.

And although Walter Reed is a name you've certainly heard, you might not associate it with an actual person. Maj. Walter Reed was "a professor of clinical microscopy at the Army Medical School, what is now the Walter Reed Army Institute of Research," Schierkolk said.

It was Reed who figured out that mosquitoes were causing yellow fever, which was killing soldiers in the Spanish-American War and workers on the Panama Canal. Reed's work "ultimately allowed for" the canal's completion, Schierkolk said, and the museum's exhibit about it effectively brings the medical hero from the past into the present.

Prescription drug prices, marijuana dispensaries and the opioid crisis keep the pharmaceutical industry in today's spotlight, but in the 18th-century United States, there wasn't much regulation at all. After a six-month apprenticeship, pharmacists could mix and dole out compounds as they wished until 1804, when Louisiana Gov. William Claiborne enacted legislation requiring pharmacists to be licensed. New Orleans' own Louis J. Dufilho Jr. was the country's first licensed pharmacist, and his apothecary and residence is now the New Orleans Pharmacy Museum. A walk into the building "is like stepping back into the 19th-century Vieux Carre," executive director Elizabeth Sherman said.

There are gorgeous rows of antique tincture and tonic bottles, surgical instruments that look like Tim Burton designed them and an old-fashioned soda fountain, which pharmacists had back in the day to help you get rid of the nasty taste of your prescription. And if you think your medical marijuana card is fancy, wait until you see the licenses to dispense opium and coca leaves.

Bonus: Because it's New Orleans, it goes without saying that you can eyeball some voodoo remedies and maybe catch a glimpse of a ghost, because the building is purportedly haunted.

In the Dark Ages, supernatural forces would probably have been blamed if you swallowed more than 400 nails.

Today, we know that doing so is a symptom of "pica, a disorder where someone consumes nonnutritive items," said Sara Wilson, executive director the Glore Psychiatric Museum, located near the site of the circa 1874 "State Lunatic Asylum No. 2." Among its exhibits are the stomach contents of a pica patient who swallowed 1,446 such objects, including saltshaker tops, thimbles and pins.

Reducing the stigma of mental illness is a pressing cultural issue and a huge part of the museum's mission, Wilson said. Exhibits on the torturous former "treatments" for mental illness — including reproductions of the primitive devices used — make it clear how far we've come in terms of understanding and compassion.

Wilson also notes that visitors should check out the museum's themed bathrooms. In all my years of travel, I've never had anyone at a museum recommend the bathrooms, but the Glore's include the Freud bathroom, the Optical Illusion bathroom — where presumably you'll be forgiven if you miss your target — and the Phobia bathroom, which I'd warn you about, but I have a fear of spoilers.

THE MUTTER MUSEUM OF THE COLLEGE OF PHYSICIANS OF PHILADELPHIA

The Mutter Museum can knock even the most jaded among us back a few yards with its massive collection of thrilling bodily anomalies and medical specimens.

Somehow, they almost hit harder with a statement of the obvious. "Spit Spreads Death: The Influenza Pandemic of 1918-19 in Philadelphia" will be on display at the museum until 2024. With eerie prescience, the Mutter mounted the exhibition in 2019.

"Originally, we posed a number of hypothetical questions for viewers of the exhibit about what their responsibilities would be in a pandemic and how they would react. Those questions are no longer hypothetical," said Nancy Hill, special projects manager at the museum.

"Spit Spreads Death" was a phrase on a sign someone put up in Philly during the century-ago pandemic, which hit the city exceptionally hard.

That may have been because, with the flu already spreading, people had crowded into the streets for a war parade. Within days, hospitals were overflowing with flu patients. Shortly thereafter, caskets piled up around the city.

In case you want to put a face mask on right now, even if you're home alone, you can get one that says "Spit Spreads Death" at the Mutter gift shop.

And you probably should wear one. After all, no one wants to go to the doctor.