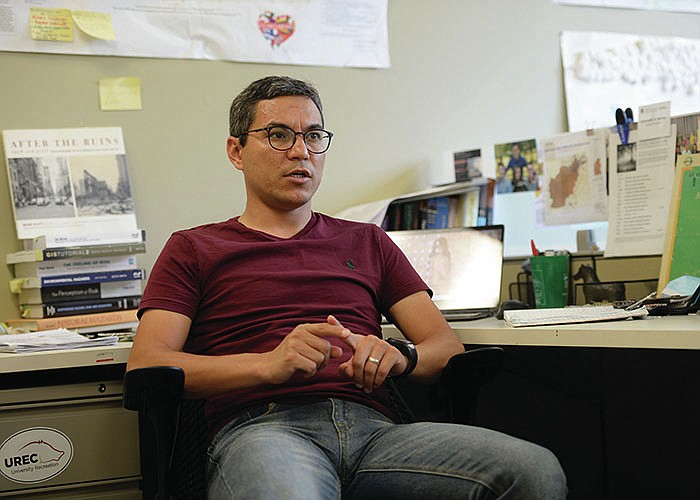 Ikramuddin G. Bahram, a graduate assistant and doctoral candidate at the University of Arkansas from Afghanistan, speaks Thursday, Aug. 19, 2021, in his office on the university campus in Fayetteville. Visit nwaonline.com/210822Daily/ for today's photo gallery. (NWA Democrat-Gazette/Andy Shupe)

FAYETTEVILLE -- On the wall in Ikram Bahram's office at the University of Arkansas, where he is working on his doctorate in the field of seismic risk perception, is a map of the fault lines that traverse Afghanistan, a country that sits in the middle of two major tectonic plates that are slowly colliding.

[Video not showing up above? Click here to watch » arkansasonline.com/829bahram/]

Bahram has spent years studying seismic activity in Afghanistan with the goal of helping the country develop critical infrastructure like hospitals, schools and roads that can better withstand the next quake, which inevitably will occur. In Kabul, the capital, which is east of the active Chaman Fault, the ground shakes with frequent unpredictability.

"There is always modeling and predictions," Bahram said. "But where the fault will rupture, causing the next earthquake, is a mystery. It is hard to predict at which point exactly and what time the energy builds up and gets locked or the plate overcomes the friction and causes an earthquake."

A catastrophic earthquake is perhaps the best analogy that can be made for the events that have unfolded in Afghanistan over the past few weeks as Taliban forces rapidly took over the country and American forces started their final withdrawal there after two decades of war.

Each day, like never-ending aftershocks, reports emerged of new districts, towns and cities being overtaken in rapid succession. The final massive tremor struck two weeks ago on Aug. 15 when the Taliban captured Kabul, solidifying the regime's rule in Afghanistan once again.

The last time the Taliban had control of the country was 2001.

Outside of Afghanistan, Afghan immigrants around the world watched as their country, with its fledgling democracy, descended into chaos, desperation and what Afghans living abroad describe as utter hopelessness and darkness.

"What I feel right now is helpless," said Bahram, who grew up outside of Kabul.

In Arkansas, there are perhaps no more than about a dozen Afghans, who live in the northwest part of the state. Most were unwilling to speak with the Arkansas Democrat-Gazette out of fear that the Taliban might target friends and loved ones who remain in Afghanistan and who are trying to leave.

Many said they are too traumatized to talk publicly, digesting the likely reality that they may never be able to return home, at least not while Afghanistan is under Taliban rule.

Last week, Gov. Asa Hutchinson said that, for now, it is unlikely that Fort Chaffee, a military base in Fort Smith, will be used to house the tens of thousands of refugees who have fled Afghanistan in recent weeks in what historians are calling the largest U.S. rescue mission since the fall of Saigon during the Vietnam War.

Canopy Northwest Arkansas, a refugee resettlement agency in Fayetteville, could begin receiving refugees as early as this week, the nonprofit's leadership said. The organization assists refugees with finding housing, work and other basic necessities.

"It has been a very traumatizing experience," Bahram said. "For all of us abroad who have seen the last 20 years in Afghanistan and those associated in any way with Afghanistan, it has been a painful process [to watch]."

"We cannot digest this," he said. "We are so stressed out. For us, with our family in Afghanistan and with our friends there, it is pretty personal."

Bahram recently sat down with the Democrat-Gazette to talk about what his life has been like since the Taliban began taking control of the country again over the summer. He's been in the U.S. since 2013 when he moved to Arkansas as a scholar in the Fulbright Program.

He's since been granted asylum and is now waiting for his green card.

Most of his relatives now live in Canada, including his father's brother-in-law who was so tortured by the Taliban during their previous reign over the country that he cannot walk or speak anymore, Bahram said.

When the family members learned that Bahram's father might be targeted next, they fled to neighboring Pakistan where they lived for nearly a decade.

"We left at 4 in the morning," he said. "The level of brutalities and atrocities the Taliban imposed is nowhere comparable to any regime in the world. We are all at this point heartbroken, devastated and traumatized."

Almost around the clock over the past several weeks, Bahram, along with other Afghans living in Arkansas and elsewhere, have received barrages of text messages, calls and emails from friends and relatives who remain in the country and who are desperate to leave.

"A lot of us have not had proper sleep, not had proper food," he said. "This stress has caused this mental breakdown. There has been no night so far I have not been to bed at 3 and wake up at 7 in the morning."

Their phones are filled with photographs and videos of friends and family members who've been waiting outside Hamid Karzai International Airport in Kabul, which was the target of a terrorist attack orchestrated by ISIS-K that killed dozens of Afghans and 13 U.S. troops Thursday.

Bahram said he did not know anyone injured in that attack.

Bahram has been helping friends with paperwork to try to board one of the U.S. military evacuation flights out of Kabul. He's been writing members of Congress, seeking any assistance they might be able to provide. He's been paying for cellphone credit so people he knows on the ground in that country can maintain some type of contact with the outside world.

His friends who are still in Afghanistan "are desperate," he said.

"They are uncertain. They are scared. They have been shifting addresses, moving to different places so if the Taliban comes and searches for them, they are not at home."

The 36-year-old said he is trying to be a "messenger of hope" for those who remain there.

Last week, he learned that his aunt, who had returned to the country this summer to get married, managed to board a flight to the Middle East.

But there are some, Bahram said, who he can't contact anymore.

A Facebook group for Fulbright scholars from Afghanistan was shut down out of fear its members still living in the country could become Taliban targets because they studied in America. Among the Taliban's draconian doctrines is an aversion to secular education, and in particular, any type education from the West.

"If the Taliban gets that information, they could recognize all of the scholars, and they are all at risk," Bahram said. "So many things are uncertain. So many people are scared."

A couple of days after the Taliban took control of Kabul, Khalid Ahmadzai gathered one evening with other Afghan immigrants in a park in Fayetteville.

He and his friends met to mourn what they perceive as the loss of their country.

They stayed almost until midnight, sharing memories of Kabul, a city once known for tall trees and quaint gardens.

"We were sobbing nonstop," Ahmadzai said. "We are grieving, but it is better to grieve together."

Democracy in Afghanistan has been fragile over the past 20 years, but there was always an undercurrent of hope that the future would continue to improve, said Ahmadzai, who moved to Arkansas in 2009 and is now an American citizen.

This time, he said, he fears that hope may be gone for good.

"It was slowly getting better and better," said Ahmadzai, who recently spoke with the Democrat Gazette in the same park where he'd met his friends a couple of days before. "And then, here we are."

"There is no proper word that can describe the feeling," he said. "There was always hope for the next day, and that kept us going, but this time, the grim news of what has happened with an overdose of hopelessness makes it even harder to accept."

Like Bahram, Ahmadzai and his family spent time in Pakistan, fleeing near certain death during the brutal civil war in the 1990s from which emerged Taliban rule in 1996. Ahmadzai later returned to Kabul with his siblings and parents, both teachers, to live under the Taliban regime.

Under the Taliban, Ahmadzai recalled one day at school when he and his classmates were bused to a nearby stadium to watch a public execution. When the execution occurred, he and the other students all turned their heads and screamed in horror, he said.

The Taliban arrested Ahmadzai several times for offenses such as listening to music or having the wrong haircut.

For each offense, he was jailed for a couple of weeks at a time and slept in crowded rooms with dozens of other prisoners who were whipped daily by guards.

His mother secretly taught girls reading and math, moving class frequently to different places so they would not be caught.

Had Ahmadzai's mother been discovered, her punishment would have been death.

When they were last in power, the Taliban prohibited women and girls from working and from going to school.

Ahmadzai cautions the global community not to believe the Taliban's new narrative that they have changed and are more tolerant, less brutal and more diplomatic.

"I don't buy that narrative," Ahmadzai said. "Prove it to me."

Ahmadzai was more than distraught as he pulled out his phone to read a message from a friend who'd been waiting outside the airport in Kabul with his wife and children for several days trying to flee.

It is clear that Ahmadzai, 40, remains traumatized from life under the Taliban.

He fought back tears as he read a lengthy text from his friend.

"'In Afghanistan, everything is crying, including trees, birds, rivers, mountains and people,'" Ahmadzai's friend wrote. "'We all think it is just a bad dream, but unfortunately, it is not.'"

"'Kabul is no more a city of love,'" the message said. "'I hope it's just a bad dream. What happened to my country?'"

Last week, Ahmadzai, who works as the director of economic advancement for Canopy Northwest Arkansas, the refugee resettlement organization, learned that his friend and his friend's family managed to get on a flight out of Afghanistan.

Ahmadzai requested that the family's location not be disclosed because some relatives are still trying to leave.

"It is going to take us a long time to recover," he said. "We are shattered."

Ahmadzai took with him to the park in Fayetteville a book of photographs he'd taken of Afghanistan -- pictures of vast mountain ranges, bucolic fields abundant with wildflowers, pristine lakes -- images of a country now devastated by decades of conflict that are not often seen by those on the outside.

Beyond the constant worry for those who may not be able to leave Afghanistan as American evacuation efforts draw to a close in a matter of days, is the even more disheartening prospect of not ever being able to return home.

Ahmadzai says he believes the latest takeover by the Taliban will be more cataclysmic than their previous reign, which lasted from the mid-90s until the U.S. invasion in 2001. This time, he said, Afghans had a taste of democracy, of freedom and of hope.

"This new generation dared to imagine. They have seen the possibilities," Ahmadzai said. "They had a chance over the last 20 years to imagine a different world, and now that is gone, and that is just crushing."

For Bahram, who'd hoped to return to Afghanistan to continue to help the country develop safeguards against earthquakes, the realization of prolonged estrangement from home is similarly heartbreaking.

"I never imagined before that I would go through such pain," Bahram said. "My whole country falling apart, shattered with the force of destruction almost overnight."

"It is really, really hard to take."