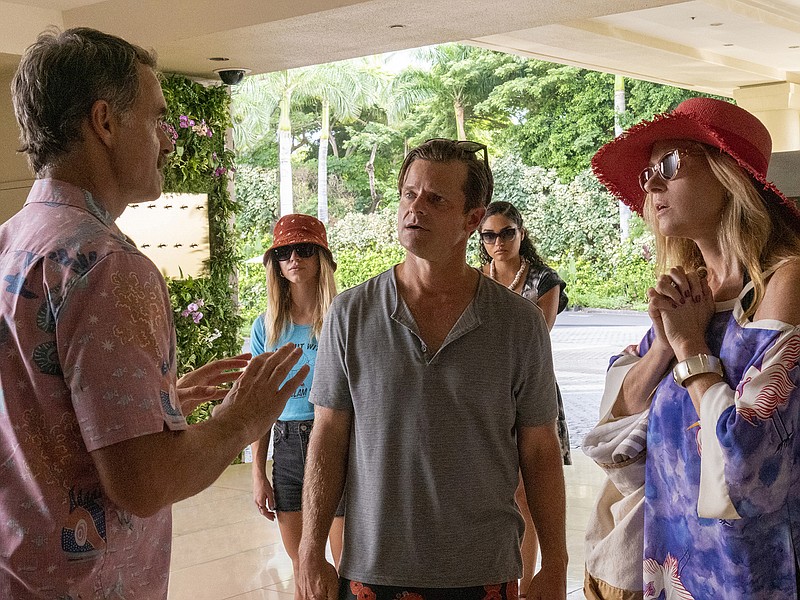 Let us swear an oath, and keep it with an equal mind,

In the hollow Lotos-land to live and lie reclined

On the hills like Gods together, careless of mankind.

We once went to a writers' conference in Mexico.

It was held at one of those all-inclusive resorts that cater to middle-class tourists, set up so you never had to leave the campus if you didn't want to. It had a private beach, and you could drink all the cheap wine, sangria and frozen margaritas you wanted without paying extra. You could snorkel around a coral reef. You could play tennis. There was a nightclub on the premises.

If you went out for a run before sunrise you might, upon returning to your villa, catch a maid on her hands and knees scrubbing a tile walkway with a toothbrush.

Some people might not find this an uncomfortable situation. We have a remarkable human ability to ignore information that doesn't conform to models we've constructed in our heads. We can tune out unpleasant frequencies of everyday life, like the homeless holding signs begging for food or work. Maybe we don't see them, maybe we just pretend to not see them, but it amounts to the same thing.

Even if you meet a gaze and smile or give a person a dollar or buy them lunch or take them home to live with you and raise them out of poverty and teach them how to make money work for them, it does not change the world. You cannot introduce fairness into the system, you cannot do much more with a life than deflect a few trajectories. The world is burning and they've passed out squirt guns.

The poor we will always have with us, Jesus said, because poverty is a relative condition. The maid scrubbing the tiles with a toothbrush might feel lucky to have secured honest work. If you want to see poverty, take a bus ride into town from your all-inclusive resort, walk around the dirt streets in the shadow of the soccer stadium. That's where you'll find desperation and terror, a higher order of discontent.

So maybe you try to talk to the maid; you offer a chirpy "Hola!" She responds with a nod and a smile that reassure you that you are not the bad guy. The world still burns, but you might feel better about yourself for a while, which is precisely the feeling the resort purports to sell you.

The HBO series "The White Lotus" was imagined as something that could be produced during the pandemic, observing the proper protocols. Mike White, who wrote every line and directed all six episodes of the first season (streaming on HBO Max), needed to contain the project, to create a kind of bubble for the production. And so the hermetic environment of the upscale luxury resort — "The White Lotus" was shot on the grounds of the Four Seasons Resort at Wailea on Maui — became a kind of petri dish, as the privileged (wealthy to uber-rich guests) interact with members of the service industry in a Xanadu built from the colonial imperative.

White, who has been a known quantity since he wrote and starred in the classic indie cringe comedy "Chuck & Buck" 21 years ago, is a humanist who locates comedy in social anxiety; he likes to make his audience squirm as they recognize the foibles of his characters as manifestations of their own doubts and wishes.

The premise is simple — we tag along for a week at the fictional White Lotus resort, following the arcs of guests who arrive on the same boat. (Typically guests arrive at the Four Seasons in rental cars.)

Then there's Tanya (Jennifer Coolidge, hereafter doomed to be known by a certain cohort as "Stifler's Mom"), a wealthy and deeply lonely single woman who arrives at the resort lugging the ashes of her dead mother and literally begging for a massage. 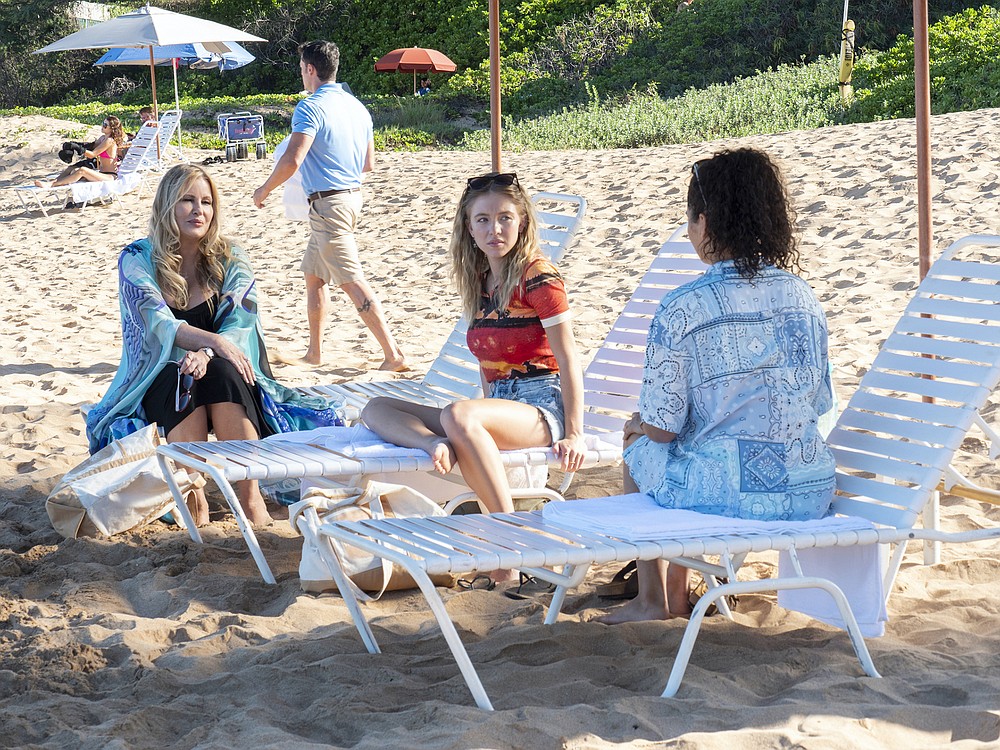 SHOULD LIFE ALL LABOUR BE?

That's the Upstairs crowd; as for the main peons, we have fastidious and efficient resort manager Armond (Australian actor Murray Bartlett), compassionate and ambitious spa manager Belinda (Natasha Rothwell), and Kai (Kekoa Kekumano), an indigenous Hawaiian who works as a waiter and dinner show performer at the resort.

These characters will entangle themselves with various guests, with results ranging from disappointing to tragic. Without revealing major spoilers, the moral universe of "The White Lotus" resembles that of the world most of us experience: Money and power are insulating — the vulnerable can be sacrificed and replaced.

But White manages a nice trick with the show, as even the characters he sets up as most deserving of empathy are made to face their own failings. We know from the outset that Shane is a rich jerk (though Lacy still retains, for me at least, the residual goodwill of his nice-guy turns in "Obvious Child" and Lena Dunham's series "Girls"), a spoiled sexist who disregards his new wife's feelings and pouts about not being booked into the resort's best room (a fair point considering he — or at least his mother — paid for it, though the suite the couple is given in compensation is very nice).

His wife, Rachel, from a modest background, is already fearing that she will be subsumed by her husband's wealth. She admirably pushes back against the idea of giving up her job as a freelance journalist. But the trouble is, Rachel turns out to be at best mediocre at her craft — someone who, in an interaction with Nicole Mossbacher (a Sheryl Sandberg-like tech CFO) reveals herself as a cut-and-paste hack.

Rachel's "career" consists of writing listicles and copying and pasting paragraphs from traditional media outlets like The New York Times. While we might admire her reluctance to become Shane's accessory, White makes clear that, earnestness aside, Rachel is not impressive and has only gotten as far as she has by trading on her looks. (But, as Shane might reason, is that so wrong?)

Meanwhile, Armond counters Shane's demands for a "better" room by a series of at first passive-aggressive maneuvers, including sending the honeymooners out for a romantic dinner on a boat rented by Tanya for the purpose of disposing of her mother's ashes.

Tanya had a problematic relationship with her mom, whom she blames for her alcoholism and inability to maintain a relationship, and she brings along her new "friend" Belinda as a kind of emotional support animal.

Tanya has decided Belinda is a gifted wellness engineer who should be running her own company, and she (Tanya) has the means to help her. All Belinda has to do is keep Tanya company off the clock until she writes her the liberating check.

Meanwhile, the Mossbachers — who are either too cheap or too indifferent to their children's needs to rent a second room — seem to have brought their bickering family dynamic with them from California.

Self-absorbed Mark is at first concerned that he has cancer, then euphoric when the diagnosis comes back negative, then disturbed when he discovers his father didn't die of cancer after all but of AIDS contracted through homosexual acts. This sends him into a funk where he questions his own masculinity and tries, awkwardly, to bond with Quinn, a sensitive and socially awkward kid who wants nothing more than to sink into his electronic devices.

Olivia and Paula mean-girl Quinn into dragging those devices, along with his bedclothes, down to sleep on the beach their first night at the resort; the tide comes in and destroys his phone and iPad. His parents again won't indulge their son (maybe that's why they're so wealthy) by having a new phone overnighted to him, so Quinn is forced to spend most of the rest of the vacation off the grid.

Meanwhile there is Paula — whose social-economic status we never learn; we only know she's the only non-white guest and that she occupies a curious place with the Mossbachers. She tags along with them but is always willing to interrogate their privilege.

Identifying with the disenfranchised Hawaiian aboriginals who were displaced to build resorts like the White Lotus, she takes up with Kai, in part to give Olivia something to be jealous about, but also because she sees something romantic in his story of dispossession. And also because he's hot.

She knows the combination to the Mossbachers' hotel safe. Mark bought Nicole a pair of bracelets that cost $75,000 apiece to make up for having an affair. She tempts Kai, who could sell them for enough to hire an attorney to file a lawsuit against the hotel that robbed him of his birthright.

WHY SHOULD WE TOIL ALONE

Nothing works out for anybody.

Well, maybe for Quinn, for a little while. Disconnecting from his devices does occasion some growth in him, if it's only the realization that most of what human beings do is manufacture pain. Where does that pain go, he wants to know? As any high school football coach can tell you, you suck it up.

Mark wants to know why he can't be the hero any longer — he was a good guy, an ally, an anti-racist. It's a question white men everywhere are confronting and have been confronting for the past few decades.

But even as other stories and individuals gain prominence and are accorded privilege, do things really change? Mark argues that no one really wants the predatory system to change; they only want to have a larger share in it. It's a zero sum game: Every advantage comes at the expense of someone else. If you're not rooting for your tribe, for whom can you root?

THERE IS NO JOY BUT CALM

Alfred, Lord Tennyson and his friend Arthur Hallam went to northern Spain in 1829, into the Pyrenees mountains, and came upon a group of stoned sailors sitting by a river, uninvolved with life. He connected them to the story of the lotus-eaters in Homer's "The Odyssey," producing the poem from which White has Armond quote in episode five of "The White Lotus":

Hateful is the dark-blue sky,

Death is the end of life;

Should life all labour be?

And in a little while our lips

Let us alone. What is it

All things are taken from us,

Portions and parcels of the

Let us alone. What pleasure

To war with evil? Is there

In ever climbing up the

All things have rest, and

ripen toward the grave

In silence; ripen, fall and cease:

Give us long rest or

Both Tennyson and White are suggesting to live is to struggle. Perhaps those who don't have to struggle so hard aren't quite living?

"The White Lotus"' wipes the slate clean at the end, as a mostly new staff prepares to greet a new slate of guests. Same as it ever was, it's just that the faces change.

In our mythologies, the maid who scrubs the stairs can end up running the corporation.

In our reality, the young rich punk kills without consequence, and even gets the girl in the end.