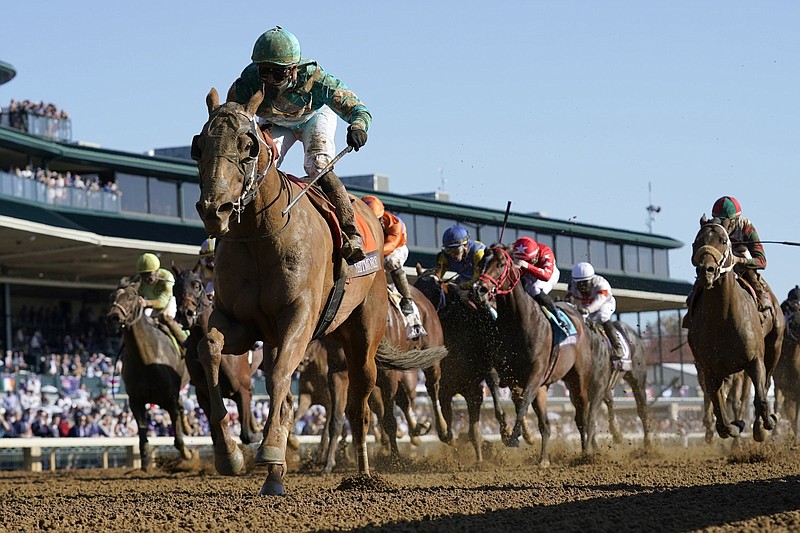 A career of excellence at horse racing's highest level -- unsurpassed in its longevity -- has come to a close.

Moquett, 49 of Hot Springs, said he thought the injury, undiagnosed as of Sunday, did not appear as one potentially career-ending for a younger horse.

"Right after the race, our first concern was for the horse," Moquett said. "You know, our phones were turned off. We weren't focusing on anything but, 'Is he going to be OK?' Once we saw that he was sound and happy and eating and knew everything would be fine, that's when we reached out to the other owners and said he's 100% healthy and is going to lead a long, healthy life. You'd never know there's anything wrong with him, but we don't want to risk him anymore at his age. We're going to use this to step out.

"This is where we retire."

Whitmore raced from the back of the pack in the race won by 2-1 favorite Yaupon, a son of Uncle Mo from the barn of Oaklawn champion trainer Steve Asmussen. Off at 7-2, Whitmore, a son of Pleasantly Perfect, trailed early and lacked the late response typical of his successful efforts. Jockey Joel Rosario later said Whitmore felt oddly different as they galloped into the turn past the wire. In response, Rosario pulled Whitmore up and held the gelding in place before he was removed from the track in a van.

Moquett said he phoned Whitmore's fellow owners, and they agreed Whitmore's time as a competitive racehorse was done. Whitmore retires with a career record of 15-13-5 in 43 starts and earnings of $4,502,350.

"Whitmore has opened a lot of doors for me and my family and my barn," Moquett said. "There's an old saying in racing that a good horse can make a person, but a great horse defines a career. I can't think of a better definition for my career."

Whitmore raced twice as a 2-year-old in 2015 but first raced at Oaklawn Racing Casino Resort in 2016, where he qualified for that year's Kentucky Derby with finishes of second, second, and third, respectively, in the Grade III Southwest Stakes, the Grade II Rebel Stakes, and the Grade I Arkansas Derby.

A 19th-place finish in the Kentucky Derby would complete Whitmore's career as a two-turn route horse, a change that would propel him to sprint stardom over the next five seasons, each started at Oaklawn.

Whitmore completed his Oaklawn career with an overall stakes record of 8-6-1 in 15 starts.

"Whitmore is a champion," Oaklawn President Louis Cella said. "He will always be a champion. He's Oaklawn's horse and Oaklawn's champion. We're so glad he's come back safe and sound. God bless Ron and the [other] owners to have been able to race and campaign Whitmore as long as they did."

Whitmore finished no further back than second in at least one graded stakes race at Oaklawn from 2016-21.

"That's a testament to the trainer," Cella said. "That shows true horsemanship. A lot of the up-and-coming trainers ought to look at Ron and see how he did it. He took his time. He's compassionate. He never put Whitmore in a bad position, and when the time came, he let him retire as a champion."

Moquett said he thought Whitmore's popularity among racing fans at Oaklawn is a product of his consistent excellence.

"I'm very proud of being a product of that area, and I am so proud that Whitmore moved Arkansans enough to reach out to me," Moquett said. "That means something to us, to my family. The outpour of affection for this horse, it's not something that I think we'd see even if we ever won the Triple Crown."

Oaklawn track announcer Vic Stauffer said he had seen similar popularity among racehorses at specific racetracks three other times, including for Hall of Fame female champion Zenyatta at Hollywood Park, which hosted thoroughbred racing in Inglewood, Calif., from 1938-2013. Zenyatta retired in 2010 with a career record of 19-1-0. Stauffer called eight of her wins at Hollywood.

"When Zenyatta would run, we'd have 30,000," Stauffer said. "Without her, we would've had 12,000. Zenyatta had groupies. She had groupies. Whitmore is just like that. When I introduce him in the post parades, I will stop and pause because I know how people are going to react."

Whitmore's career highlights were led by his win in the 2020 Grade I Breeders' Cup 6-furlong Sprint Championship at Keeneland in Lexington, Ky.

Stauffer said he thought a fitting honor for Whitmore would be for Oaklawn to rename the Hot Springs Stakes the Whitmore Stakes, among possibilities Cella said he and other Oaklawn officials would begin to consider as early as today.

"We didn't want to jinx anything, so we put all of those thoughts aside until the right time," Cella said. "Monday morning, we'll sit around and discuss what the options are."

Moquett said it was an honor enough to race Whitmore at Oaklawn, the only track he and his family have ever considered home.

"I've come to the realization that people loved Whitmore for his honesty," Moquett said. "He's a lot like the kind of hard-working people who come to Oaklawn, people who know how to pick themselves up by their bootstraps and get the job done. Whitmore showed up for every race. He gave it his all. He didn't win all the time, but people knew he was going to fight. That's what he was. No one thought, 'I'm going to get mad if he doesn't win.' It was, 'I love Whitmore for the way he tries.' ''