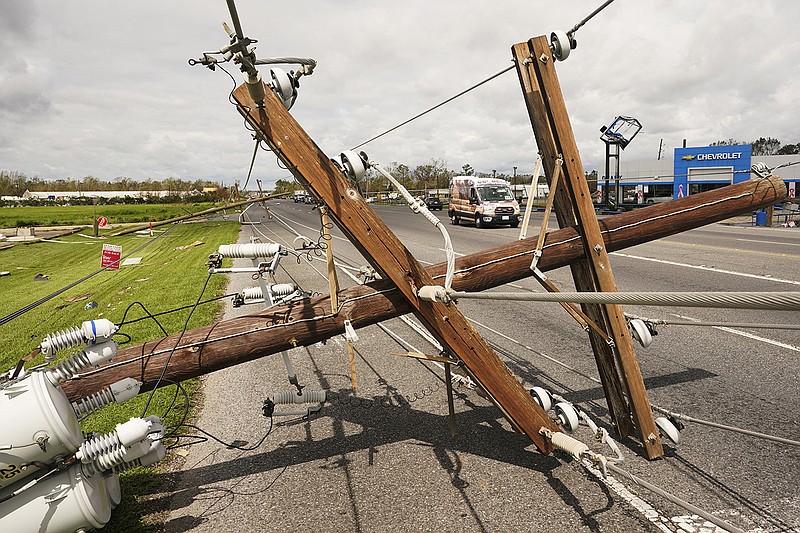 A group of 24 Central Arkansas first responders arrived Monday evening at a convention center just south of Baton Rouge to begin aiding in search-and-rescue efforts after Hurricane Ida -- one of the most powerful hurricanes ever to hit the U.S. mainland.

The first responders were soon joined by 21 others from Northwest Arkansas at check-in to await their mission assignment this morning as the Arkansas Task Force-1, a team specially trained in urban search and rescue and in responding to natural disasters.

More than 1 million customers in Louisiana and Mississippi were without power as Ida pushed through on Sunday and early Monday before weakening into a tropical storm. The storm was downgraded to a tropical depression Monday evening, with maximum sustained winds of 35 mph, according to the National Hurricane Center.

When it made landfall Sunday, the Category 4 Hurricane Ida was stronger than Hurricane Katrina, but New Orleans' levees, flood walls and floodgates held up. Some neighboring communities are dealing with floodwaters, and areas across the Gulf Coast suffered damage from the storm.

Arkansans are assisting with hurricane relief efforts in Louisiana and Mississippi through public entities, private companies and nonprofits. On Monday, many said their work was in the beginning stages, with the focus on getting down to the affected areas and assessing the damage in coordination with local officials.

Gov. Asa Hutchinson on Sunday authorized both civilian and National Guard resources from Arkansas to support the emergency recovery efforts.

Members are expected to leave Fort Chaffee starting this afternoon, with more departing from across the state on Wednesday.

The Arkansas Task Force-1 crew is composed of team members from numerous city fire departments and emergency services. They have a variety of specialities, such as structural collapse, still- and swift-water rescue and helicopter search and rescue.

"Having members trained in helicopter search and rescue is a new addition for Arkansas Task Force-1. We're one of the few states that have that training and partnership with their National Guard unit," said John Luther, director of Washington County Emergency Management and program coordinator of the northwest task force. "They bring the helicopter, and we bring the rescuers. Arkansas is very progressive in having that tool available."

The task force also transported much of its own equipment, with 10 vehicles equipped to breach structures; eight watercraft; and about 1,000 gallons of fuel traveling with the Central Arkansas group, said Andy Traffanstedt, director of the Pulaski County Office of Emergency Management and task force program manager.

Luther is on the ground in Baton Rouge but said the work could not be done without the support of those back home, including help in paying for two flat tires his convoy had to replace Monday on the way to Louisiana.

"As much as you see people on the ground in the cool uniforms and boats, there's always a group of people behind the scenes that truly make the effort happen," he said.

The American Red Cross of Missouri and Arkansas sent four emergency response vehicles to Louisiana on Monday to transport and deliver food and emergency supplies to affected communities. Two volunteers will travel in each vehicle.

The two-state region has more than 50 responders assigned to aid after disasters across the nation, including the Louisiana storm, the California wildfires and the recent Tennessee floods.

"We have people spread all across the country right now," Brimley said. "I really can't stress enough the need for volunteers."

Volunteering in many areas includes sheltering and other disaster services, but the Red Cross also has virtual coordinating and assistance positions. More information can be found at redcross.org/volunteertoday.

Arkansas motor coach drivers have also been assisting both before and after the hurricane made landfall.

"We helped evacuate an assisted living center; many were wheelchair-bound or special-needs. It was a very interesting and emotional time," Martin said.

The Federal Emergency Management Agency sent out a request for drivers Thursday night, he said. Hundreds of motor coaches are given GPS tracking units and instructions by the agency.

"Our drivers were literally the first three buses to line up on the Ready Line, ready for deployment," Martin said.

Drivers are still out helping get people to safety in Lafayette and New Orleans while others wait in Lake Charles to be deployed wherever they are most needed -- communities, retirement homes, hospitals.

"Usually, you try to get people out of the way of the hurricane as much as possible, but they don't know where the rain is going to fall; they don't know which rivers are going to flood. So, to some degree, they have to wait until the storm has passed to see the areas in need," he said. "We will see in the coming days how serious this becomes."

Cellphone service is very spotty, he said, which can make it difficult for Martin to keep up with what is happening with drivers, who live out of the buses with their own supplies for the first two to five days on these types of disaster-relief missions.

"We eagerly await to hear what they've seen and how they've been able to help," he said. "It's a wild situation, and these guys and girls deserve a lot of credit. They live all over the state. ... We have drivers who eagerly await the season and are excited to get the call and go help folks. No one hopes for the hurricane to come, but if it does, we want to be first to help."

Entergy Arkansas is sending 520 employees -- line workers, vegetation crews and support personnel -- to the Gulf region to help with the effort underway to restore power to the almost 1 million customers who lost power in the hurricane, communications specialist Brandi Hinkle said.

Entergy's overall storm team of more than 20,000 and growing began assessing the vast damage and destruction across New Orleans and southeast Louisiana caused by Hurricane Ida's landfall on Sunday, according to a Monday news release.

The Category 4 hurricane's brutal winds and torrential rainfall toppled transmission towers, power poles and other equipment, causing outages for nearly 900,000 in Louisiana. The number of outages is expected to increase in Mississippi as the company continues to find more damage, Hinkle said.

Power restoration is prioritized by emergency services, then areas with the most outages and finally the more sparsely populated areas. Some rural areas could go three to four weeks without power, though 90% will have power more quickly than that, she said.

"We have kept an appropriate number of employees here to do whatever work we need in Arkansas," Hinkle said. "We anticipate there could be some storm damage in southern Arkansas and across the Delta as a result of this storm."

The crews will be there as long as they are needed, Hinkle said. Most of the Arkansas workers sent there are currently in Mississippi, and more workers could be sent to help with hurricane-related outages if needed.

Arkansas Task Force-1 will continue assisting in search and rescue this week, with its agreed deployment set for seven to 10 days.

"Obviously, if the need is not there, we can come back early, and if need is longer, we will stay there longer," Traffanstedt said.