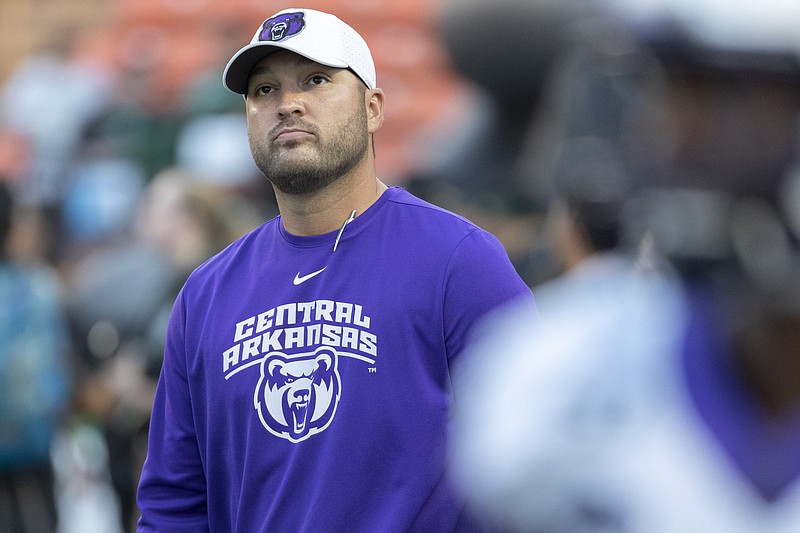 Jeff Holt knew he had to change something. His Russellville team, which began the 2002 campaign as the No. 1 team in the state, found itself in yet another early-season dogfight, this time with Fayetteville.

The Cyclones were set at quarterback -- soon-to-be Razorback Landon Leach was the unquestioned starter. But Holt desperately wanted to get his No. 2, junior Nathan Brown, on the field.

Russellville couldn't seem to tackle that night, and with Fayetteville loaded at wide receiver, Holt decided on a switch at cornerback. He didn't look far for an answer.

"I just turned around and [Nathan] was there," Holt recalled. "I said, 'Go and I'll tell you what to do as the game goes on.' "

Brown figured things out quickly, sticking at corner for the rest of the season. He did the same the next fall when he replaced Leach, took the Cyclones to the state quarterfinals and landed a scholarship at the University of Central Arkansas, becoming one of the most decorated players in program history.

Even then, his path to the Bears' head coaching job was not preordained.

Yet Brown, 35, begins his fourth season as UCA's head coach with a team folks in Conway believe could be the program's best since joining the FCS in 2006. Throughout those past 15 seasons, Brown has been ever-present, watching the Bears rise along with his own coaching career.

"There's just something about this program that tugs at my heart," Brown said. "UCA is a dream job for me, and I truly mean that."

Brown's college career had an auspicious start when he took control of the Bears' starting quarterback job in 2005 as a redshirt freshman.

After a late September loss to Valdosta State in which Brown took over midway through the game, UCA won its final six regular-season games. The Bears added two more victories in the Division II playoffs before bowing out in the quarterfinals.

Brown was named Gulf South Freshman of the Year, and three seasons later as a redshirt senior he led the Bears to their first FCS conference championship.

That run earned Brown a trip to the 2009 Senior Bowl, which turned into a spot at both the Jaguars and Saints NFL training camps that summer.

Brown's father David hadn't initially expected his son to take the football route. Nathan was an all-state baseball player throughout high school and long considered playing it in college.

But the NFL? That was a pipe dream -- and then some.

"I was always the 'knock you over the head and bring you back to reality' guy," David Brown said. "He always turned out better than what I gave him credit for."

Nathan soon crashed back to reality as well after getting twice that summer. Rather than pursuing professional football further, Brown -- along with his new bride, Jessica -- returned to their alma mater. They both worked two jobs during that 2009 season -- Nathan as a substitute teacher and a volunteer assistant for UCA; Jessica as a waitress and in IT at Hewlett-Packard.

By the following spring, Nathan was hired as the Bears' quarterbacks coach. Come fall 2011, only Brown's second season as a full-time assistant, he called plays for the first UCA team to reach the FCS playoffs.

"[To] have the trust of your coaching staff to say, 'Hey, this 25-year-old kid is going to call plays to go win the game. Our jobs are on the line but we trust this guy.' That's an honor," Brown said. "That's something I didn't take lightly."

At the end of the 2013 season, when coach Clint Conque left the Bears for the head job at Stephen F. Austin, Brown -- then 27 -- went to Athletic Director Brad Teague with his elevator pitch for the job.

Teague didn't think Brown was quite ready, instead hiring Mississippi Gulf Coast Community College Coach Steve Campbell. When Campbell departed for South Alabama in December 2017, Teague looked down the hall for a replacement.

Back with 'that guy'

Fifteen steps. That's all the distance between the head coach and offensive coordinator's offices underneath the stands on the west side of Estes Stadium.

Brown still wishes he knew the difference those 15 steps would have on his life. If he did, perhaps he would've been better prepared for his interview when Teague arrived at his door.

It didn't matter. He'd been readying for the opportunity ever since he started coaching in 2009.

Two days after Campbell was hired at South Alabama, Brown was introduced as UCA's next head coach.

Brown didn't expect to do it alone. His first call after getting the job was to Brooks Hollingsworth, who was on staff when Brown was both a player and an assistant and had been a head coach at Arkansas Tech University. His second was to Ken Collums, the offensive coordinator who'd first brought Brown to Conway in 2004.

They'd only worked together for one season -- Collums left the Bears after Brown's true freshman season to become the offensive coordinator, and then later head coach, at Abilene Christian. But there was no hesitation from Collums, who, along with Hollingsworth, is set to begin their fourth season on Brown's staff.

"It was just a deal where I wanted to get back with that guy," Collums said. "If you want to make something go, then it's got to be about relationships.

"We would kind of consistently text every now and then just to keep in touch, and the fact is the time we spent together, I really learned his heart and I loved his heart."

Those relationships are something Brown built from his first days at UCA. Going into his redshirt freshman season, Brown roomed with Bears star wide receiver Mike Norvell, who is now the head coach at Florida State.

From Norvell to Teague to Collums, everyone saw glimpses of the traits that put Brown in a position to succeed from the time he took those 15 steps.

"Sometimes when you have a young freshman or a younger player, they kind of feel themselves into a role," Norvell said. "Nathan really took control of the opportunity [to be the starter] and was always pushing himself, always trying to continue to learn. [But] he had humility about himself and just how he operated. People respected that."

'This is a good place'

The two were set up on a date midway through Brown's second year at UCA -- Jessica was a freshman -- and only when Brown had to go to spring practice did he fill her in.

Football is far from a secret now. Jessica is often out at practice along with their two children, Rylee, 8, and Luke, 7.

Under Brown's watch, the Bears have become a national player at the FCS level. UCA earned a first-round bye during Brown's first season as head coach and again in 2019. Both seasons ended in second-round losses. It's a ceiling Brown hopes his Bears can bust through and, perhaps, win a national title.

"That's just the culture and expectations he's brought to the table as head coach," quarterback Breylin Smith said. "I don't think it's any secret that's our goal. We understand what's at stake and what we're trying to accomplish, and we're just trying to work toward that."

Even if the Bears reach their title aspirations in 2021, another successful season could see bigger programs gauging Brown's interest. Yahoo's Pete Thamel mentioned the UCA coach as one of a handful of names that may be ready to make the jump from FCS to FBS next offseason.

"If any of our coaches think that they can find a better place to work, I'll support them," Teague said. "But specifically for Nathan, it'd be hard because he's always been here, and we certainly want him to be here."

Brown isn't looking for the exit, though. He likes being a head coach and wants to stay in that role rather than return to a coordinator gig. But he also knows an FBS job could provide him and his family with "life-changing money" -- his total salary last year was just over $200,000.

Regardless of what happens on the Stripes, Brown is happy in Conway.

"Where coaches get it wrong is they forget about the quality of life, they forget about what really matters, and I think they tend to chase money and chase titles. This is a good place," he said. "It would take something special along with just about the whole kitchen sink to get me out of here."