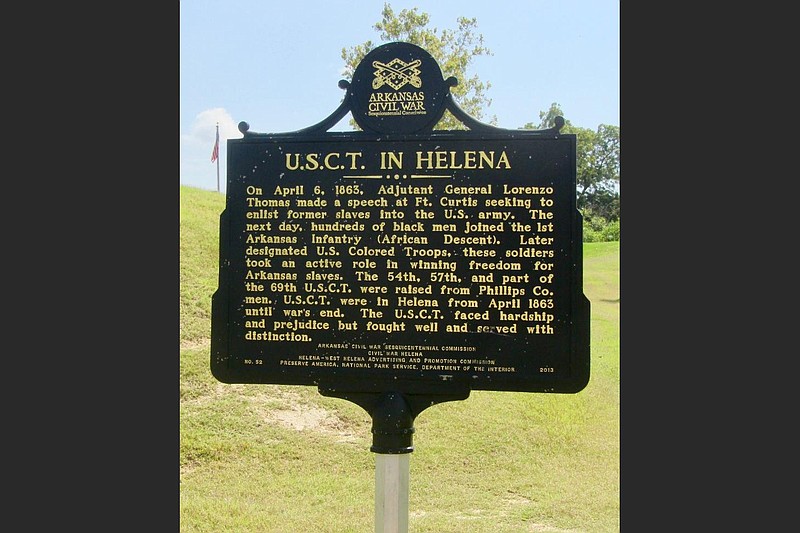 At the Fort Curtis facsimile, a sign salutes Black soldiers in the Union army. (Special to the Democrat-Gazette/Marcia Schnedler)

HELENA-WEST HELENA — Once upon a time, when many Southerners still branded the Civil War as "The War of Northern Aggression," an Arkansas-crafted narrative extolling the part played by Black troops in a Union victory would have been hard to imagine.

But exhibits created over the past decade or so in Helena, the historic eastern half of the Helena-West Helena hybrid, describe the role of Black soldiers in the North's defensive victory on July 4, 1863.

Another fresh focus is the ways in which Helena became a refuge for newly liberated slaves after Union forces had captured the Delta city in July 1862. The most compelling newer site is Freedom Park, where human silhouettes depict the positive impact on freed civilians as well as the efforts of Black troops.

One tableau cites local reaction when the Emancipation Proclamation went into effect on Jan. 1, 1963: "That New Year's Eve, freedom seekers in Helena celebrated into the early morning hours. The men, women and children who had fled from farms and plantations to follow the Union army to Helena were free."

According to the website civilwarhelena.com, "Helena is one of the most compelling sites in the nation to learn about African-American experiences during the war, Helena's unique history as a previously occupied Confederate city that became a refuge for freedom seekers invites the exploration of the issues that defined the Civil War." 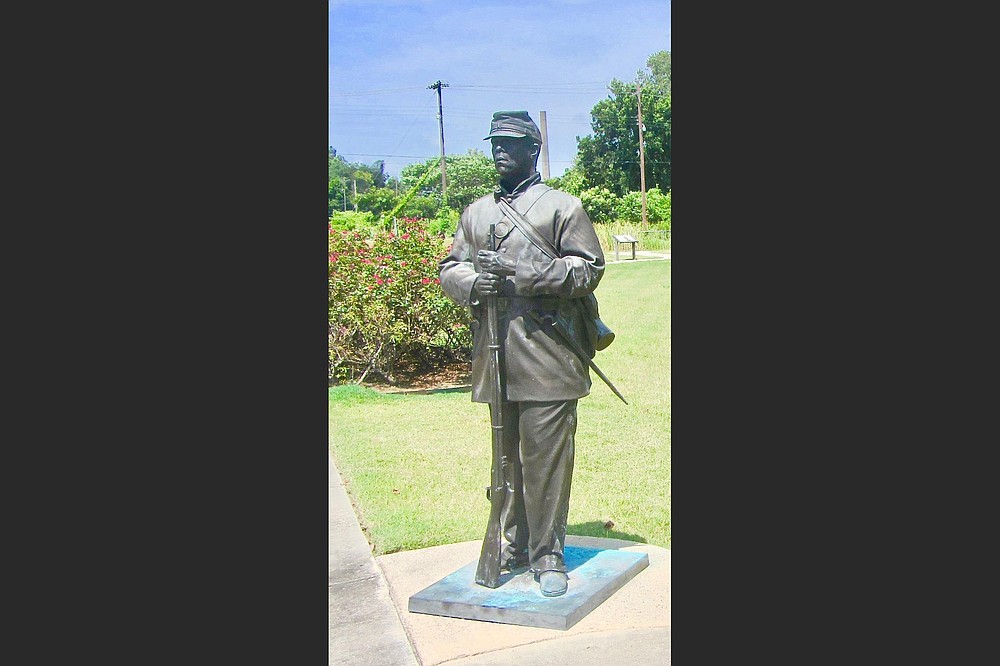 A statue of a Black Union soldier stands in Helena-West Helena’s Freedom Park. (Special to the Democrat-Gazette/Marcia Schnedler)

The traditional narrative for the Battle of Helena, which secured the city for the North until war's end in April 1865, still can be absorbed at a number of locations. A map is available online or from the Arkansas Welcome Center, 1506 Martin Luther King Drive (U.S. 49) at the Mississippi River bridge.

Historical markers identify additional locations, including the battle's three other Union batteries. At the Battery A site, a recent bulldozing to build a home has destroyed the hilltop contours as they were in 1863.

The older attractions include a facsimile of federal Fort Curtis, three-quarters of the original's size; the Moore-Horner Home, a temporary hospital for the battle's wounded; Battery C, an earthwork Union redoubt overlooking Helena's downtown; Helena Museum, with a battle diorama; Confederate Cemetery, where three secessionist generals are buried; and Delta Cultural Center, displaying a trove of Civil War exhibits.

Visitors learn that Helena became a major Union logistical base on the Mississippi River after federal forces under Maj. Gen. Samuel Ryan Curtis occupied the city in 1862. An enclave surrounded by Rebel forces, it was dubbed "Hell in Arkansas" by some punning Iowa soldiers. 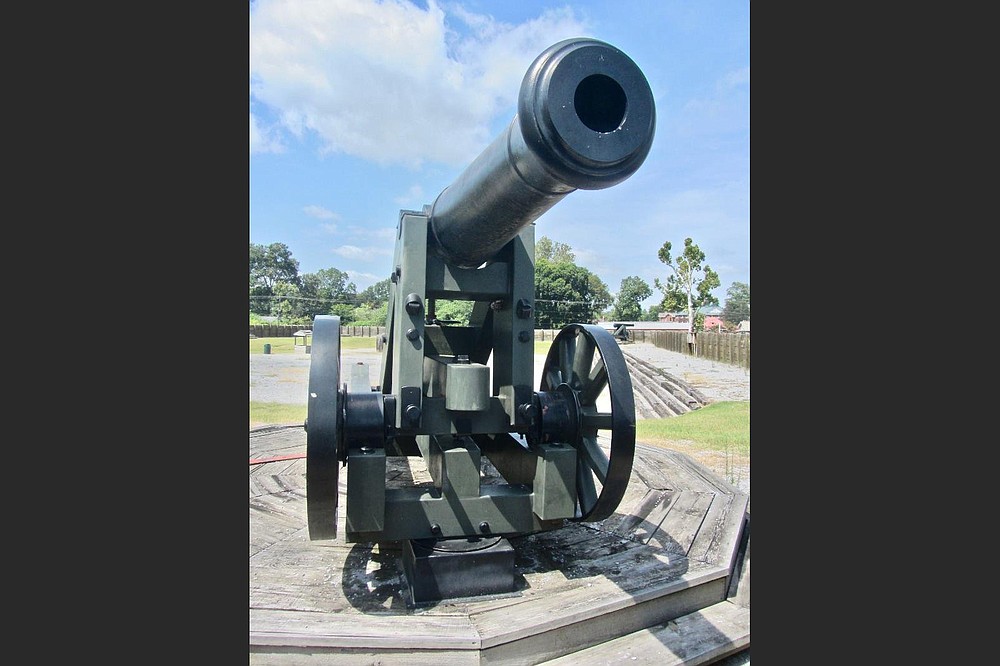 A copy of a powerful Civil War cannon can be seen in the replica of Fort Curtis. (Special to the Democrat-Gazette/Marcia Schnedler)

Commanding the Confederate attack in 1863 was Lt. Gen. Theophilus W. Holmes, while Maj. Gen. Benjamin M. Prentice served as Union commander. By coincidence, the July 4 battle was fought on the same day that Vicksburg surrendered to Northern forces, and a day after Gettysburg's crucial combat ended in Union victory.

Confederate attacks in Helena were repulsed with only a couple of exceptions on July 4 before Gen. Holmes ordered a full retreat later in the day. Northern casualties added up to 57 killed, 146 wounded and 36 missing — a total of 236. Southern losses were seven times larger at 173 killed, 687 wounded and 776 captured or missing — 1,636 in all.

At Freedom Park, the first Arkansas location designated as a National Underground Railroad Network to Freedom site, the statue of a Black soldier stands next to a sign headlined "Becoming Soldiers." The text notes that "Arkansas contributed 5,526 Black men to the Union effort between 1863 and 1865."

A plaque at the Fort Curtis facsimile informs visitors that "The U.S.C.T. [U.S. Colored Troops] faced hardship and prejudice but fought well and with distinction." That note serves as a reminder that many white Union troops, while fighting to preserve the Union, harbored their own prejudices against Black Americans.

A musical note stemmed from the recruitment of Black troops around Helena-West Helena, as reported by historian Thomas A. DeBlack in the anthology "Rugged and Sublime: The Civil War in Arkansas," edited by Mark K. Christ.

Titled "Marching Song of the First Arkansas," it could be sung by Black recruits to the tune of "John Brown's Body." Its first verse set a buoyant tone:

Oh, we're the bully soldiers of the First of Arkansas,

We can hit a Rebel farther than a white man ever saw,

As we go marching on.

Even more stirring is another verse:

We are colored Yankee soldiers now, as sure as you are born,

When the masters hear us yelling, they'll think it's Gabriel's horn,

As we go marching on.

That determined spirit among recently liberated ex-slaves is echoed today, in Freedom Park and other places in Helena.

For information on Helena-West Helena Civil War sites, log in to visithelenaar.com