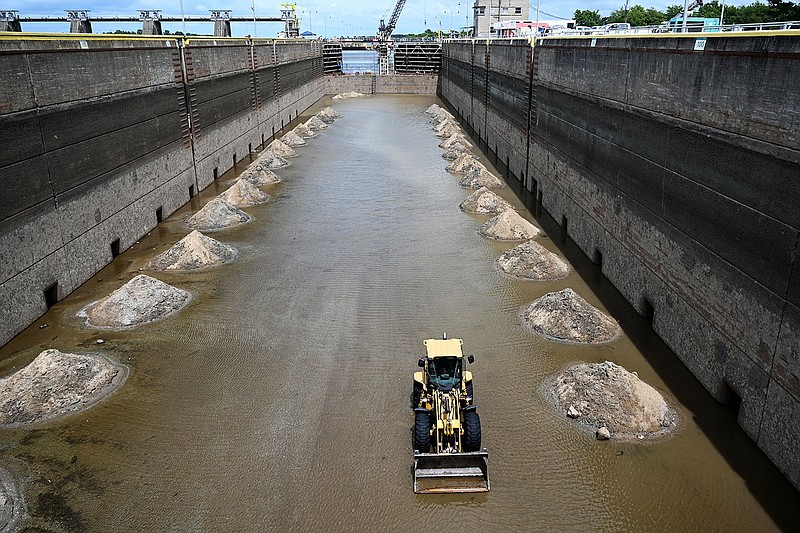 Construction crews from the U.S. Army Corps of Engineers, Little Rock District work on a section of the David D. Terry lock during the dewatering on Monday, Aug. 30, 2021. (Arkansas Democrat-Gazette/Stephen Swofford)

Shutting down a section of Arkansas' busiest waterway can be quite the disruption to thousands of tons of grain, coal and steel that flow within its banks.

But it's the only way for engineers to get a good look at a nearly 60-year-old piece of civil engineering that is largely hidden below the murky depths of the Arkansas River.

Workers from the U.S. Army Corps of Engineers Little Rock District dewatered the David D. Terry lock near Scott earlier this month as a part of 14-day long scheduled maintenance.

The Corps drained the lock, which sits on the Arkansas River, on the eastern edge of Pulaski County, to examine and repair erosion to the lock and its gates.

On Monday, workers were welding steel beams that had been damaged by erosion over the decade since the lock was last fully dewatered in 2000. Engineers paid special attention to the lock's gates, which are reinforced with steel beams that are eroded by the river over time.

"In layman's terms, we're making sure that the gate doesn't fall apart," said David Reicks, an engineer with the Corps. "If that repair isn't done, then you're reducing the life of the gate by half."

With the lock closed, barge traffic on this stretch of the Arkansas River has been halted because workers need a mostly-drained lock for inspection and repairs. It's an undertaking that requires cranes on river barges, teams of engineers, metal workers and welders working through the sweaty heat of an August in Arkansas.

At the gate on the east side, a pump keeps the water levels at just a few inches of depth to allow the Corps to get to work and a few trapped fish to swim around beneath them.

For the barges full of grain, fertilizer, chemicals and coal that use the Arkansas River as a highway, the dewatering is a major inconvenience. All traffic flowing up and down the river has to be halted before it reaches David D. Terry Lock and Dam.

"We coordinate this with industry and let them know that this is coming way in advance," said Aaron McGee, an operations project manager with the Corps. "We started planning for this a year ago."

While divers from the Corps can go in and inspect the lock, the murky waters of the Arkansas River limits visibility. Instead, engineers need to drain the water from the locks so they can begin a process McGee likened to a "triage" so engineers know what needs to be prioritized for repairs.

Jay Townsend, a spokesman for the Corps Little Rock District, said draining the lock is the only way to get a clear picture, especially of the gates.

"The visual inspections are invaluable," he said. "This stuff is underwater, you can't see it."

The steel beams on the lock gates are the main concern for the Corps' engineers, who say they are difficult to repair and inspect without draining the lock.

Engineers partially dewatered the lock for repairs in 2016, but this is the lock's first full draining in two decades with much of the erosion of the gates evident to the Corps' engineers.

While workers place magnesium anodes to protect the steel beams on the gates, sections of the beams have eroded and need to be replaced. Like many of the dams and locks on the river, the David D. Terry Lock and Dam was built in the 1960s to help stabilize water levels.

The river's locks and dams have lead to a steadier, year-round barge traffic, at least until it's time for engineers to drain and inspect the locks again.