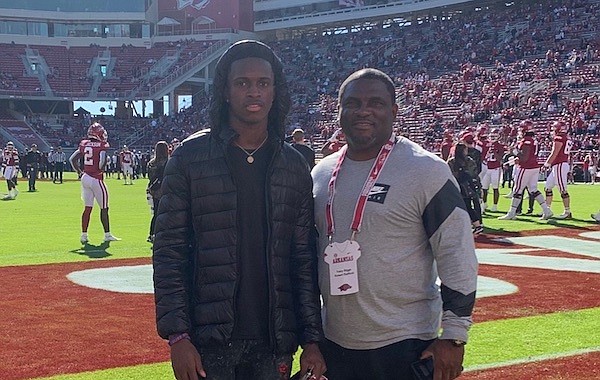 2023 4-star receiver Robert Stafford and his uncle Tracy before the Arkansas-Mississippi State game on Nov. 6, 2021.

A visit for Arkansas’ 31-28 victory over Mississippi State and a recent visit from Razorbacks receivers coach Kenny Guiton has a 4-star junior receiver high on the Hogs.

Robert Stafford, 5-11, 170, of Melbourne (Fla.) Eau Gallie, said the Razorbacks fans stood out during his trip to Fayetteville.

“I loved the fans, for sure. There’s no pro teams in Arkansas,” Stafford said. “All they care about is the Razorbacks, so the fan base is super crazy just off what you can see.”

He recorded 42 catches for 605 yards and 5 touchdowns for the Commodores this season. National recruiting analyst Tom Lemming of CBS Sports Network plans to visit with Stafford in January, but has seen enough of him to rate him a 4-star.

After his November visit to Fayetteville, he tweeted it was an “eye opening experience.” His time with Arkansas' coaches has also made him feel good about the Razorbacks.

“The coaches keep it extra real with me. They don’t sugarcoat anything and Arkansas is a family,” he said.

“Coach Guiton is a really genuine coach,” Stafford said. “I like his vibe a lot, and Coach Kenny kind of matches me a little more in a way, like he’s younger and he can relate to everything in my situation a little more.”