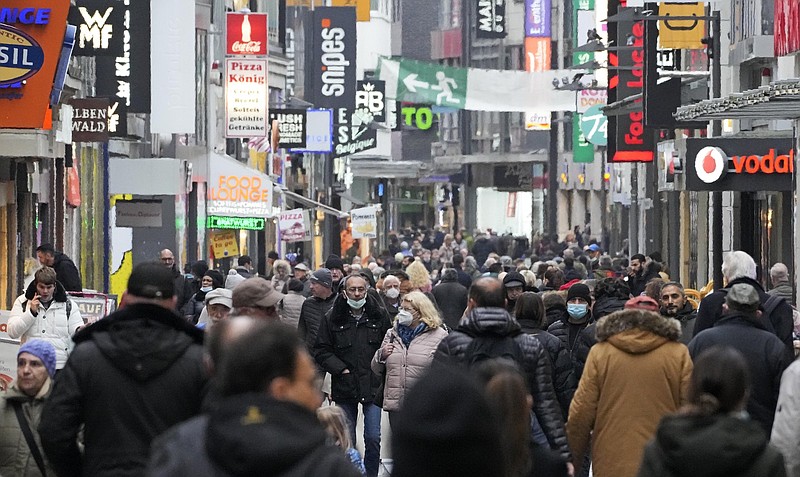 FILE - People fill up the shopping streets in Cologne, Germany, Wednesday, Nov. 17, 2021. Official figures show that consumer prices across the 19 countries that use the euro currency are rising at a record rate. The European Union?s statistics agency said Tuesday, Nov. 30, 2021 that the eurozone?s annual inflation rate hit 4.9% in November, largely as a result of a huge spike in energy costs. (AP Photo/Martin Meissner, File)

LONDON -- Consumer prices across the 19 countries that use the euro currency are rising at a record rate as a result of a huge spike in energy costs this year, official figures showed Tuesday.

Eurostat, the European Union's statistics agency, said the eurozone's annual inflation rate hit 4.9% in November, the highest since record-keeping began in 1997 and up from 4.1% in October, the previous high mark.

"We haven't seen inflation this high since the eighties," Bert Colijn, senior economist for the eurozone at ING Bank, said in a note to clients. "The energy shock of 2021 is starting to have a substantial impact on consumers."

Like others, the eurozone, which is made up of 19 economies including France and Germany, is enduring big price increases as a result of the economic recovery from the coronavirus pandemic and blockages in supply chains.

Across the eurozone, inflation is running at multiyear highs, including in Germany, Europe's largest economy, where the annual rate has hit 6%. Even that is below the 6.2% recorded at last count in the U.S., the biggest 12-month jump since 1990.

The eurozone's core inflation rate, which strips out potentially volatile items such as alcohol, energy, food and tobacco, also spiked higher in November to an annual rate of 2.6% from 2%.

That points to the headline rate already having second-round effects, through higher wages, for example.

Energy costs jumped 27.4% in November from a year ago, continuing an upward trend.

The inflation gains have driven up costs for a range of products and services, and have led workers and unions to demand higher wages in many European countries.

Under normal circumstances, the price increases would likely pile pressure on the European Central Bank to start considering the prospect of raising its main interest rate from a record low of zero. The bank is tasked with setting policy to meet a 2% inflation target.

However, the recently discovered omicron variant of the coronavirus has prompted some uncertainty over the global economic outlook, and as a result, central banks around the world are expected to hold back from announcing any big policy changes soon. Were the variant to start affecting growth levels, then prices, such as oil, would likely drift lower, easing inflation rates worldwide.

"November's inflation data were yet another surprise on the upside," said Jack Allen-Reynolds, senior Europe economist at Capital Economics. "The omicron variant has increased the level of uncertainty even further, but for now, we suspect that it will have a fairly small impact on inflation."

Many economists think the inflation spike over recent months will reverse next year as base effects linked with the sharp fall in prices during the pandemic last year, primarily of energy, are stripped out from annual comparisons.

"Although the [European Central Bank] has stated that it sees the current price pressures easing in 2022, and our baseline is that monetary policy will remain accommodative, the latest data will add to the debate on the appropriate level of policy support," Katharina Koenz, an economist at Oxford Economics, said in a note to clients.

"However," she added, "there isn't much the ECB can do about higher energy prices and supply bottlenecks in the short-term anyway."

Records started being compiled about the euro two years before its actual launch in 1999. For the first three years of its existence, it was an invisible currency that was traded on foreign exchange markets and used for accounting purposes and electronic payments. In 2002, euro notes and coins first came into circulation, replacing historic currencies such as the French franc, the German deutschmark and the Italian lira.

Information for this article was contributed by Pan Pylas of The Associated Press and by Liz Alderman of The New York Times.