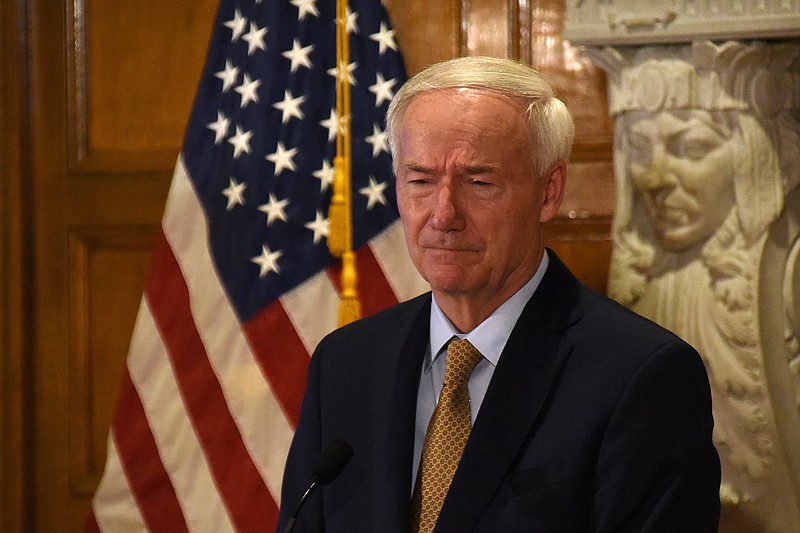 Arkansas Gov. Asa Hutchinson announced that he plans to call a special session of the General Assembly, starting Tuesday, to consider a multiyear income tax cut bill and some minor measures.

"With the level of support that is committed, I feel comfortable in calling the session with that being the lead issue," Hutchinson said at his weekly news conference in the governor's conference room at the state Capitol.

The governor said he doesn't plan to put abortion legislation patterned after Texas' civil cause of action law on the call for the special session because he wants to wait until the U.S. Supreme Court provides more guidance on the Texas law.

He said his formal proclamation calling the special session won't be issued until closer to the start, and he hopes to complete the call by Friday.

"I hope that we have a short session and we come in and do the business and we keep our focus on the tax cuts, which was the plan all along," Hutchinson said, "and so, hopefully, that will be the case and we will work with them to accomplish [that]."

The proposal also would create a nonrefundable low-income tax credit; make adjustments to smooth the tax cliff between tax tables; index the standard deduction to the consumer price index; create triggers for some individual and corporate income tax rate cuts; and rename the state's long-term reserve fund as the catastrophic reserve fund.

At least one group has suggested the income tax cut bill would cost the state treasury more general revenue than that.

Hutchinson signaled that he plans to call a special session on the income tax cut bill on the same day that more than a dozen groups, including Arkansas Advocates for Children and Families and the Arkansas Citizens First Congress, urged state lawmakers in a letter dated Tuesday "not to spend money on a cut to the top tax rate that will largely benefit a small number of wealthy Arkansans, while more than 1 in 5 children in Arkansas grow up in poverty."

"Instead invest those funds in programs that will take us up from near the bottom of states in our educational and health outcomes and make Arkansas a great place to live," these groups said in their letter. "The budget surplus has been built up because, for too many years, the state government has chosen to underfund or not to fund critical investments that would benefit all Arkansans, from toddlers in preschool to the elderly in our nursing homes."

"We are meeting the needs there and continue to do so," he said. "Our budget is in a position that we can meet those needs and we can also make sure that we can have these tax cuts, which has been the long-term plan all along."

"This round is balanced," he said of the proposed income tax bill.

Hutchinson said reducing the individual income tax rate to 4.9% will make the state competitive with other states, and benefit job creation and capital formation, thus keeping talent in the state.

Rep. Joe Jett, R-Success, said Tuesday there are signatures from 70 representatives, including Democratic Rep. Mark Perry of Jacksonville, on the income tax cut bill that Rep. John Maddox, R-Mena, will sponsor in the House.

Perry could not be reached for comment by telephone late Tuesday afternoon. The House includes 78 Republicans and 22 Democrats.

Sen. Jonathan Dismang, R-Searcy, said Tuesday there are signatures from 25 Senate Republicans and independent Sen. Jim Hendren of Sulphur Springs, on the income tax cut that he plans to sponsor in the Senate.

The Senate is composed of 26 Republicans, seven Democrats and an independent. The Senate has a vacant seat because of the resignation of Sen. Lance Eads, R-Springdale.

Sen. Jason Rapert, R-Conway, said he is drafting legislation that would allow for a civil cause of action to be added to Act 309 of 2021, a law Arkansas passed in the spring that bans virtually all abortions in the state; however, the law is enjoined by a court order.

The civil cause of action provision would be similar to that included in the law Texas enacted in May that bans abortions at six weeks and allows private citizens to enforce the law through lawsuits.

Hutchinson said he did not place a Texas-style abortion law on the call for a special session because Arkansas already has the most restrictive abortion law in the nation and because there are cases pending on both the Texas law and a Mississippi abortion law before the U.S. Supreme Court. Oral arguments on the Mississippi law are scheduled today.

"Any additional action should await guidance from the Supreme Court," the governor said, adding that there is ample opportunity to revisit the 1973 Roe v. Wade decision that legalized abortion nationwide.

Rapert said he was sad to see that Hutchinson did not add abortion legislation to the call, but said he would continue to "stand for life."

"I believe if we had never had anyone challenge the standing Supreme Court decision, then we would still have slaves in America and women couldn't vote," he said by phone Tuesday.

Hutchinson declined to say whether he would sign such a bill if it reaches his desk.

Garner said he was working on a bill that would likely be very similar to a bill he intended to file during the extended regular session that adjourned Oct. 15. That bill would have prohibited "the propagation of divisive concepts in certain public entities, including public schools and education service cooperatives," according to a resolution Garner filed that attempted to extend that legislative session.

During the regular session earlier this year, Garner sponsored Act 1100 of 2021, which prohibits state entities from teaching, instructing or training employees to adopt or believe concepts including that the state of Arkansas or the United States is fundamentally racist, sexist or oppressive; that one race or sex is inherently superior to another; that an individual by virtue of his or her race or sex bears responsibility for actions committed in the past by other members or the same race or sex; and others.

"I know there's support to stop the inundation of our children with the racist propaganda that is critical race theory," he said.

Garner said he also plans to introduce a tax bill separate from the governor's proposal that would address eliminating the state income tax. He declined to provide details Tuesday but said Hutchinson's bill has "some major faults."

Lowery said he will also have legislation addressing critical race theory ready if lawmakers vote to extend the special session. He said his bill would be similar to a bill he attempted to pass during the regular session, House Bill 1761, but would place an absolute ban on certain concepts being taught in schools rather than allow school districts the flexibility to adopt their own policy or not.

He said he personally believes it is prudent to wait until the U.S. Supreme Court rules before considering Rapert's abortion legislation.

Asked whether a majority of the Senate believe the same thing, Hickey said he feels like they do, but he isn't 100% sure about that.

Asked whether he supported extending the session to consider legislation on items not listed in the governor's proclamation, Shepherd said his focus "is trying to have an efficient session and looking to just take up the matters on the call."

"I mean, that's been the way, at least, in my understanding of past history with regard to special sessions has been to focus on the matters on the call and not open it up. Obviously, there's other members that have other thoughts on that, I certainly respect each member's viewpoint on it," he said. "The focus has to be on the items in the call. ... I have always understood that if you extend and open up a special session that creates a number of issues, so my focus is and my preference is to stick to the items on the call."

He said he was unsure whether there is support to extend the session and hadn't polled membership, but said it will "depend on what issues are out there."

Shepherd, who is also an attorney, declined to say whether he agreed with the governor's position that lawmakers should wait for Supreme Court action on abortion laws, saying he had not seen Tuesday's news conference.