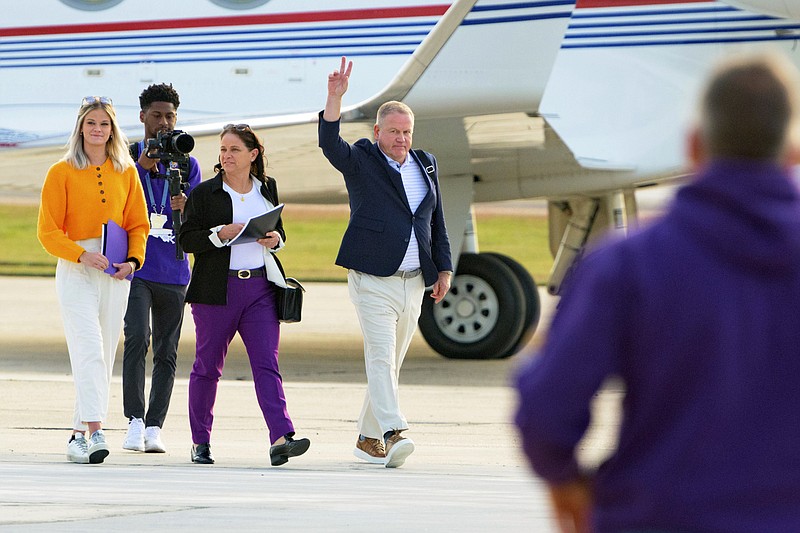 New LSU football coach Brian Kelly gestures to fans after his arrival at Baton Rouge Metropolitan Airport, Tuesday, Nov. 30, 2021, in Baton Rouge, La. Kelly, formerly of Notre Dame, is said to have agreed to a 10-year contract with LSU worth $95 million plus incentives. (AP Photo/Matthew Hinton)

LSU flew newly hired coach Brian Kelly on a private jet to Baton Rouge, where he was greeted Tuesday by fans, dignitaries and the Golden Band from Tigerland after agreeing to a 10-year contract worth $95 million plus incentives.

The hiring of Kelly -- who has Notre Dame for the past 12 seasons and eclipsed Knute Rockne for career victories with the storied Fighting Irish -- came together Monday night in yet another blockbuster coaching move in college football.

LSU made it official Tuesday morning.

"Brian Kelly is the epitome of a winner," LSU Athletic Director Scott Woodward said. "He has built and sustained success at every program he's led, from multiple undefeated regular seasons and national coach of the year honors to [Division II[ national titles and College Football Playoff berths. His credentials and consistency speak for themselves."

Kelly replaces Ed Orgeron, a Louisiana native who won a national title at LSU just two seasons ago with Heisman Trophy winning quarterback Joe Burrow leading the Tigers to a 15-0 record. Orgeron has gone 11-11 since and agreed in October to a $17 million buyout that would have him step down at the end of this season.

Like Orgeron, Kelly is 60 but the similarities more or less end there. Orgeron is a Cajun raised in the shadow of shrimp trawlers on the Bayou Lafourche southwest of New Orleans. He was raised on LSU football and idolized the Tigers' stars of the past.

Kelly came from an Irish-Catholic family in the Boston area and is bound to be far more familiar with using nut crackers to pick the meat our of a lobster claw than with sucking seasoned juices from the heads of boiled crawfish.

But he has recruited in Louisiana, where LSU gets much of its elite home-grown talent. In recent history, Louisiana has produced as much NFL talent per capita as any state.

"I could not be more excited to join a program with the commitment to excellence, rich traditions, and unrivaled pride and passion of LSU football," Kelly said. "I am fully committed to recruiting, developing, and graduating elite student-athletes, winning championships, and working together with our administration to make Louisiana proud.

Kelly was accompanied by Woodward on his chartered flight to Baton Rouge. As he walked out of the plane and onto the tarmac, he waved and gave a thumbs-up to cheering fans while the LSU marching band played. Kelly's introductory media conference was scheduled for today.

Kelly was 113-40 as a head coach at Notre Dame, including a current run of five straight seasons of at least 10 victories. His overall coaching record is 166-62 over 18 seasons in major college football.

No previous Notre Dame coach has left the Irish, winners of eight AP national championships, to take a job at another school since 1933. Rockne's successor, Hunk Anderson, went from Notre Dame to North Carolina State after going 3-5-1 in 1933.

Notre Dame (11-1) remains in contention to reach the College Football Playoff for the third time in the past four years.

LSU paid Orgeron nearly $9 million this season, making him among the highest paid coaches in college football along with Alabama's Nick Saban, Clemson's Dabo Swinney, Texas A&M's Jimbo Fisher and, in the past month, Mel Tucker of Michigan State and James Franklin at Penn State. That list certainly now includes Southern Cal's Lincoln Riley, who bolted Oklahoma over the weekend in the other big coaching move this week.

Orgeron was due to make an average of $7 million over the length of his six-year contract that ran through 2025. Kelly's full salary at Notre Dame, a private school, was unknown, but it was believed to be more than $5 million per year.

While Kelly has no personal ties to the South, neither did two of the past three national-title winning coaches at LSU. Les Miles, who won a title in the 2007 season, was a Michigan man who coached at Oklahoma State before replacing Saban in Baton Rouge. Saban, who won the BCS championship in the 2003 season, is a West Virginia native who came to LSU from Michigan State.

Kelly's national titles have come at Division II Grand Valley State. He worked his way up from there to Central Michigan and then to Cincinnati, always winning more than the coaches who preceded him.

He did the same thing at Notre Dame, but the national championship has eluded him. As good as the Fighting Irish have been, they have not won it all since 1988 and have been outclassed in two College Football Playoff semifinals (in the 2018 season against Clemson and two years later against Alabama) and the BCS title game against the Crimson Tide in the 2012 season.

Kelly will now see Saban every season in the SEC West and try to fill the last remaining hole on his Hall of Fame resume at LSU, a school that has turned its past three coaches into national champions. 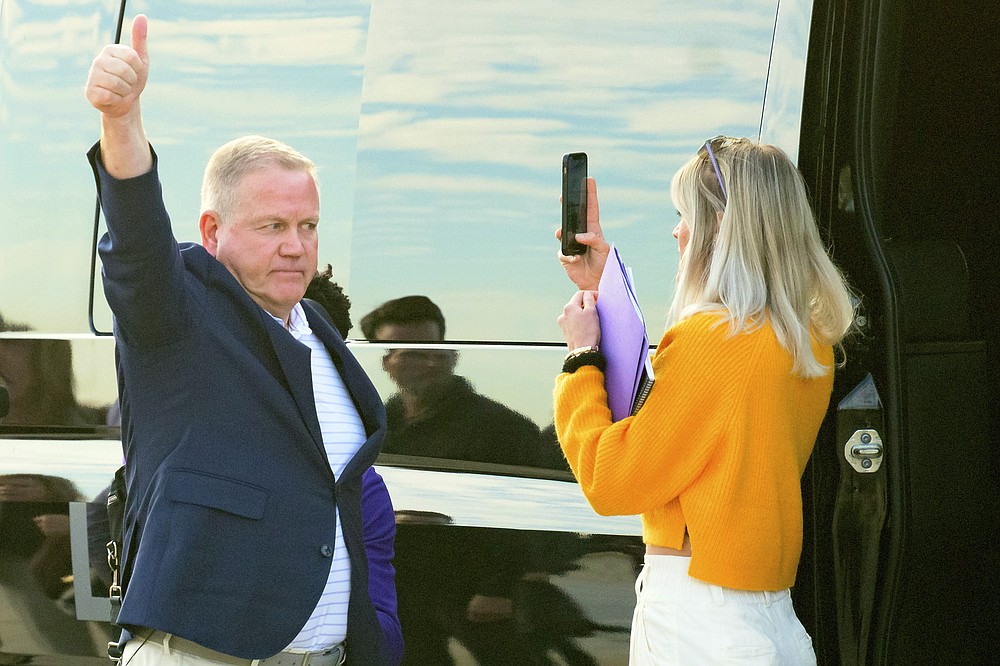 New LSU football coach Brian Kelly gestures to fans after his arrival at Baton Rouge Metropolitan Airport, Tuesday, Nov. 30, 2021, in Baton Rouge, La. Kelly, formerly of Notre Dame, is said to have agreed to a 10-year contract with LSU worth $95 million plus incentives. (AP Photo/Matthew Hinton)