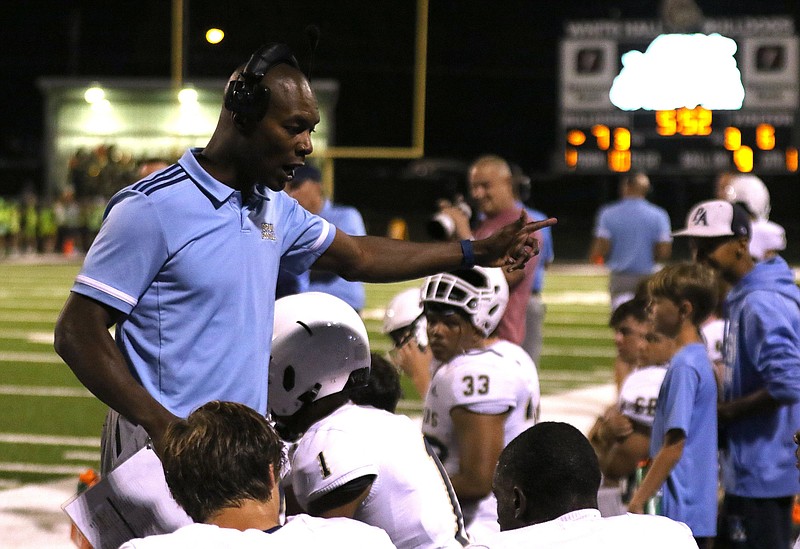 The reason Pulaski Academy loaded its nonconference slate with championship contenders from nearby states is to be competitive enough to return to Arkansas' 5A title game.

Pulaski Academy's first opponent, Robinson, will visit Warren in a 4A state semifinal at 7 p.m. Friday – the same time Pulaski Academy and White Hall will kick off for the 5A crown. The next opponent, Madison-Ridgeland Academy, just won the Mississippi private-school 6A championship.

Lipscomb Academy, the only team to beat Pulaski Academy (12-1) this season, will play in the Tennessee Division II Class AA final Thursday.

Coach Anthony Lucas' Bruins recovered from that 64-28 defeat to hang up 60 or more points in six of their next seven games, including a 64-8 rout of Watson Chapel at home and a 63-28 win at White Hall.

It's no fluke to Lucas, who succeeded Kevin Kelley at the helm in May, that White Hall (11-2) gets a second shot at his team Friday for all the marbles.

"White Hall, we knew they were going to be tough coming down there," said Lucas, a University of Arkansas wide receiver from 1995-99. "It was a very hostile environment. They were very athletic and very fast, and they did some things to throw us off. We made some adjustments not just on offense but on defense as well, because if you recall, we were tied 21-21 at halftime.

"Our kids aren't the type of kids to come out all hoopla or hoorah. They come out level, but you also have to almost pull it out of those guys. I think that's what happened. At halftime, they realized they need to do better. They need to play better."

Charlie Fiser threw for 383 yards and four touchdowns, and Joe Himon rushed for 176 yards and 4 touchdowns to hand the Bulldogs their only 5A-Central Conference loss of the season. But even with a lopsided second half, Lucas suspects the Bruins will have to play much better at War Memorial Stadium on Friday.

"I was talking with my offensive coordinator Adam Thrash, and he was saying, 'I will never let that happen again,'" Lucas said. "He was steady trying to find ways to beat teams the way we were playing because he felt other teams were going to get that film and imitate, do some of the same things White Hall did because of some of the success they had against us."

The road to a possible 10th state championship for the Bruins hasn't been as smooth as conference play, however. They fought off Harrison 36-21, Magnolia 56-25 and Greenbrier 38-28 in the 5A playoffs, relying heavily on the arm of Fiser, who needs just 170 more yards to reach 4,000 passing this season, and the legs of Himon, who has 1,153 rushing yards to his credit.

The Bruins' statistics back up their juggernaut status, however. This season, junior Jaylon McKinney has caught for 1,175 yards and 12 touchdowns, senior Charlie Barker has pulled down 10 touchdown catches and sophomore John Charette has totaled 9 touchdowns.

Yet, White Hall has made a habit of slowing down high-powered offenses in the postseason, eliminating Farmington 31-17, Camden Fairview 35-14 and Little Rock Christian Academy 24-14. And third-year Bulldogs Coach Bobby Bolding, who's taking his third school to a championship game, is a proven master in showing marked improvements in his team during same-year rematches.

CORRECTION: An earlier version of this story incorrectly indicated the location of the previous White Hall-Pulaski Academy game. The Oct. 8 game was played in White Hall.