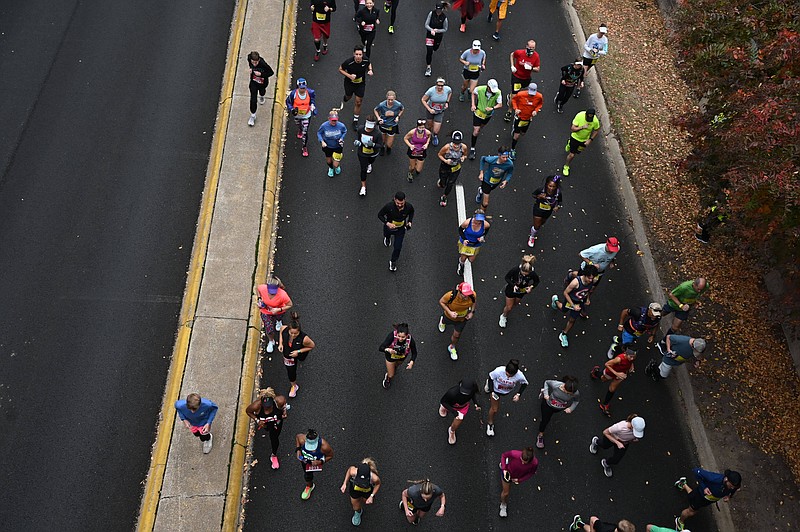 A paramedic died late last week from severe head injuries suffered after being pulled under a utility vehicle while responding to a call during the Little Rock Marathon, according to a police report and released statements from Metropolitan Emergency Medical Services.

Maj. Dean Douglas, 50, of Jacksonville was "traveling alongside" a utility vehicle on a bicycle Nov. 21 when he was pulled under the vehicle, a report filed by the Little Rock Police Department states. Douglas was responding to an emergency call when the incident happened at Daisy L. Gatson Bates Drive and South State Street.

Douglas died from his injuries Friday at the University of Arkansas for Medical Sciences, according to the report and his obituary.

A service for Douglas will be at 11 a.m. today in First Assembly of God at 4501 Burrow Drive in North Little Rock. The service will be private.

First responders will escort Douglas' casket in a procession from the church to Smith North Little Rock Funeral Home at 1921 S. Main St. after the service, Jordan Johnson, MEMS spokesperson, said Tuesday night. The exact route was not known Tuesday evening, but members of the community were welcome to line the streets in Douglas' honor, Johnson said.

MEMS is a public, nonprofit entity governed by the Little Rock Ambulance Authority, according to a news release. Its service area spans about 2,400 miles in Central Arkansas and stretches across multiple counties.

Douglas is the first MEMS responder killed in the line of duty since the organization began 37 years ago, according to a MEMS Facebook post.

Gov. Asa Hutchinson announced late Tuesday that flags will be flown at half-staff in honor of Douglas and will remain lowered through the funeral today.

"Major Douglas was a 28-year veteran of MEMS," Greg Thompson, MEMS executive director, said in a statement Tuesday. "He leaves a legacy of service and honor and will be missed by all who knew him. Major Douglas was a wonderful husband, father, friend, veteran, firefighter, paramedic, teacher and healer. As an organ donor, he has provided his last act of heroism. Major Douglas exemplified the very best of humanity."

Douglas, a father of three, was born in Virginia but made his home in Arkansas after serving in the Navy, including in Operation Desert Storm, his obituary says. It says he met his wife on a first responder mission after Hurricane Katrina in 2005.

He owned D2 Comics and More in Jacksonville, and was a volunteer captain with the Gravel Ridge Fire Department.

The Little Rock Marathon -- a USA Track and Field-certified course and Boston Marathon qualifier -- was started in 2003, according to its website. The marathon is a project of and benefits the Little Rock Parks and Recreation Department.

"We are heartbroken, of course," Jamie Moody, media director, said Tuesday. "It is terrible anytime an accident happens, especially for this to happen to a MEMS worker responding to an incident."

Moody encouraged members of the community to donate to Toys for Tots in honor of Douglas in lieu of flowers, as requested by his family.

The family has asked that anyone attending the service bring unwrapped toys, which will be loaded into an ambulance and taken to Toys for Tots. Donations can also be made in Douglas' memory at www.toysfortots.org.