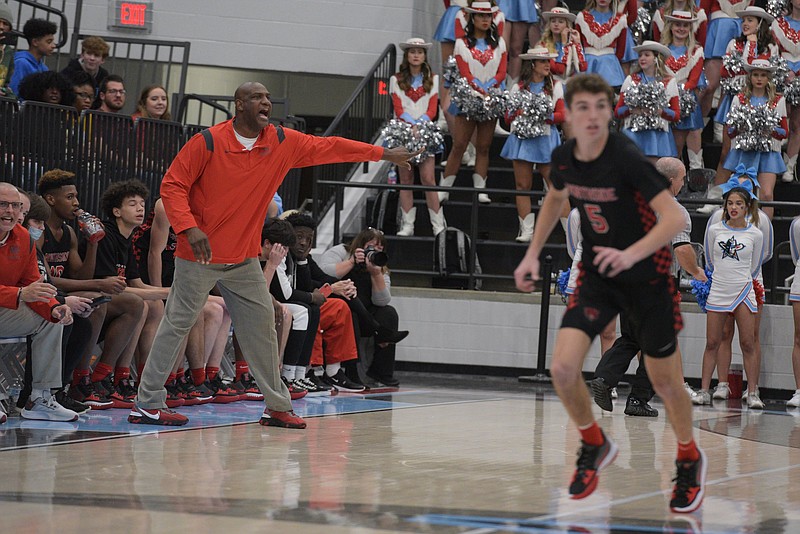 Whitmore dominated the game on both ends, scoring 32 points in the Grizzlies' 72-63 win over Fort Smith Southside on Tuesday night.

The game was the first regular-season game between the two schools on campus since the games were moved to the UA-Fort Smith Stubblefield Center in 2002. This was also the first Northside-Southside game at the Mavericks' new arena. Last season, Southside was playing at Ramsey Junior High School while the new arena was being built. The old gymnasium was converted into a new cafeteria and commons area.

"I told Coach Burnett that it is great that we can play these games on our campuses," Southside Coach Stewart Adams said. "We knew there would be a lot of energy from both teams tonight. It was a fun night to play basketball. It is great for these kids to play in front of a crowd like this."

Burnett, the Fort Smith Northside coach who was head coach at Southside from 2002-2005, said he was not used to driving to Southside for a road game.

"When we played [Southside], we played them at UA-Fort Smith," Burnett said. "I like how loud it was out there. It is great for fans that may not have been to a Northside-Southside game to come, sit in the chairback seats and enjoy a great game."

The fans did get to see Whitmore control the paint on both ends of the floor, scoring 16 first-half points as the Grizzlies (3-1) build a 37-22 halftime advantage.

"We never kept [Whitmore] off the boards in the first half and that led to a lot of putbacks and free throws," Adams said. "We knew we had to keep him from getting the easy baskets, But give him credit, he hit some big shots."

The Mavericks (3-1) climbed back from a 17-point halftime deficit to get to within 49-45 going into the fourth quarter. Whitmore scored 12 more points in the fourth quarter to help Northside hang on for the win.

The Mavericks did get to within 62-57 on a stickback by Ki Kolls, but the Grizzlies used another 7-0 spurt, including four from Whitmore in just over a minute to get back up 69-57 with 56 seconds left in the game.

Yazed Taforo paced Southside with 18 points, while Dmitri Lloyd and Kolls each added 12.

The Lady Bears (3-0) scored the game's first 13 points and never looked back in getting the win over the Mavericks (3-1).

Yonni Releford scored 10 points in the first quarter as Northside built a 25-5 advantage, then increased the lead to 38-10 at halftime.