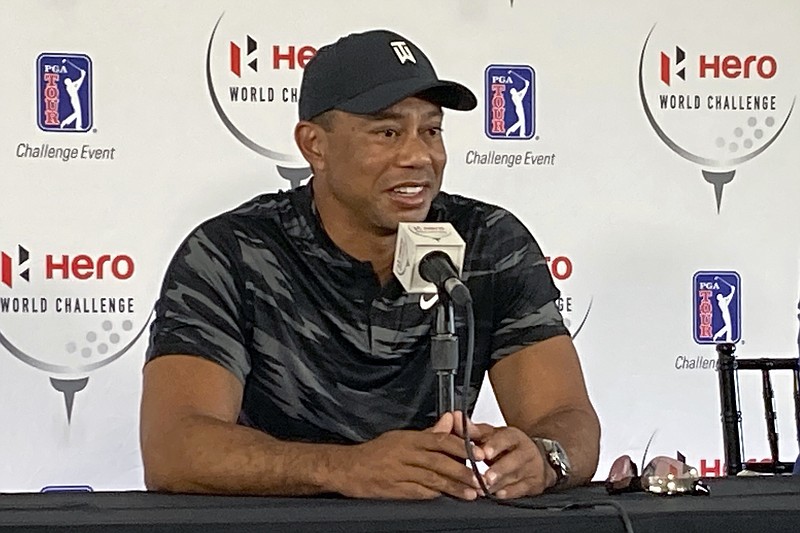 NASSAU, Bahamas -- Tiger Woods had nothing to say about the February car crash that shattered his right leg and he had even less of an idea what his future in golf holds except that he's a long way from deciding whether he can compete against the best.

"I can show up here and I can host an event, I can play a par-3 course, I can hit a few shots, I can chip and putt," he said Tuesday. "But we're talking about going out there and playing against the world's best on the most difficult golf courses under the most difficult conditions.

Woods addressed members of the media for the first time since his Feb. 23 crash on a winding road in the Los Angeles coastal suburbs. Police said he was driving at least 84 mph when he crossed a median and his SUV tumbled down a hill.

Doctors said he shattered tibia and fibula bones in his right leg in multiple locations. Those were stabilized by a rod in the tibia. A combination of screws and pins were used to stabilize additional injuries in the ankle and foot.

Asked his recollection of the accident, Woods said curtly, "All those answers have been answered in the investigation, so you can read about all that there in the police report." When asked if he had any flashbacks to the trauma, he replied: "I don't, no. Very lucky in that way."

Woods said he felt fortunate to be alive and to still have his right leg -- he said the possibility of amputation was "on the table" -- and to be able to walk into the press center at Albany Golf Club without a noticeable limp. From the waist up, with biceps bulging through a black-and-gray shirt, he looked like he did a year ago.

Woods is the host of the Hero World Challenge, which starts Thursday for 20 elite players.

He said he spent three months immobilized -- a makeshift hospital bed was set up in his Florida home -- before he could start moving around on crutches and eventually walk on his own. Two weeks ago, he posted a video of his smooth swing with a short iron.

That raised hopes that he was on his way back. On Tuesday, he hit the brakes on any notion that a comeback was near. Still to be determined is whether he even wants to go through the work required to compete at a high level.

What was clear was that any golf in his future would be limited, and it already was headed in that direction before the car crash. He played only nine times during the pandemic-shortened 2020 season, ending the year with a fifth surgery on his lower back.

Even so, he said he could see a scenario of picking and choosing where to play, presumably around the majors, much like Ben Hogan did after his near-fatal car accident in 1949. Woods won the Masters in 2019 after back fusion surgery, and just two years after he could barely walk and feared his career was over.

"I got that last major, and I ticked off two more events along the way," he said.

The other two were the Tour Championship in 2018, when he outplayed Rory McIlroy in the final round at East Lake, and the Zozo Championship in Japan in fall 2019 for his 82nd career PGA Tour victory to tie Sam Snead's record.

Can he win again?

His right leg will never be what it once was. Ditto for his left knee, which has gone through five surgeries, one of them a week after he won the 2008 U.S. Open despite having shredded ligaments and a double stress fracture. He said his back won't be the same either, and it still ached even as he sat at a table for his news conference.

"All that combined means that a full schedule and a full practice schedule and the recovery that it would take to do that, no, I don't have any desire to do that," he said. "But to ramp up for a few events a year ... there's no reason that I can't do that and feel ready.

"I've come off long layoffs and I've won or come close to winning before," he said. "So I know the recipe for it. I've just got to get to a point where I feel comfortable enough where I can do that again."

Since the accident, Woods gave an interview to Golf Digest (with which he has a financial deal) in May and a video interview with the Discovery-owned outlet that was published Monday. He also was in touch with U.S. players at the Ryder Cup and says the players with whom he's close have kept in touch. But he hasn't lost his intense desire for privacy, including what exactly happened when he was speeding along that suburban LA road.

He said friends kept him from what was being said and written about him, and he refused to watch anything on TV except for sports.

"I didn't want to go down that road. I wasn't mentally ready for that road yet," he said. "A lot of things in my body hurt at that time, and whether I was on medication or not, it still hurt. ... I didn't want to have my mind go there yet. It wasn't ready."

Meanwhile, the Masters is four months away, and to hear Woods speak about the long road ahead, anything but the Masters Club dinner for champions seemed unlikely. Woods said everything was a short-term goal.

"This year's been a year I would like to turn the page on," he said.