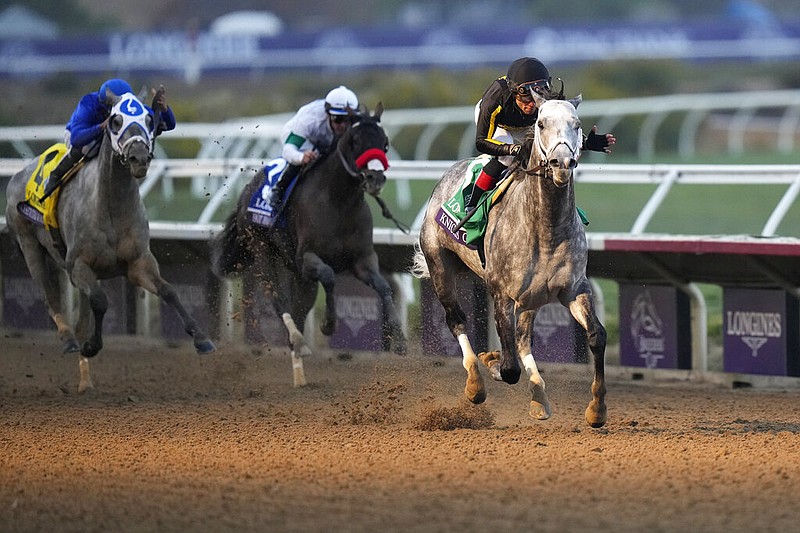 HOT SPRINGS -- Dozens of newcomers among Oaklawn Racing Casino Resort's horsemen for the 2021-22 season include one undeniable superstar.

Though he does not plan to arrive until January, racing's leading rider Joel Rosario said several brief stints of racing at Oaklawn convinced him to make the track his racing home for the bulk of the season.

"I am very excited to be there," Rosario said. "There's great racing there, so it's a good place to be, and I like it there for sure. I like the people there and the countryside. I mean, it's great."

Gary Stevens, the retired Hall of Fame jockey, now serves as a jockey agent. He convinced Brazilian rider Tiago Pereira to move his tack for the winter and spring from California to Oaklawn. Stevens also persuaded Geovanni Franco to return for the first time since 2017. Franco has since ridden primarily in California.

Seventeen new trainers at Oaklawn include Norm Casse, trainer of multiple graded-stakes winners, and the son of Mark Casse, a member of the Canadian Horse Racing Hall of Fame. Rookie trainer Norman Cash has also has opened a bar at Oaklawn. He began a second career as a trainer after he handed control of a roofing business to his adult children in Albuquerque, N.M.

With one month to go in the 2021 campaign, Rosario's mounts have earned a purse total of $32.9 million, tops among North American riders. He has ridden the winners of 50 graded-stakes races this season, including a win on Bob Baffert-trained Concert Tour in Oaklawn's Rebel Stakes on March 13.

"We always worked hard, and this was the season we were hoping for, but it was kind of surprising the way it went," Rosario said. "I was just really blessed, and I am thankful for all the people who helped make it possible."

Stevens said Pereira and Franco both wanted out of California.

"The inventory of horses in California is not good," he said. "There are more jockeys than there are horses. It's going to be tough this winter. At Santa Anita, there are four guys who are riding the top horses, and everybody else is scrimmaging for the same horses."

Among Pereira's graded-stakes winners is Tripoli, who won the Grade I Pacific Classic Stakes at Del Mar in San Diego on Aug. 21.

"A lot of people don't know him, but he's won the Dubai World Cup for $12 million; he's won the Singapore Cup, which is $10 million," Stevens said. "He's won graded stakes at Del Mar and Santa Anita.

"He's a very, very hard worker in the morning. He can ride anything. He's the Brazilian cowboy, I call him. Nothing's too wild for him. He can really get a horse to finish."

Among Franco's 17 career graded-stakes wins is the 2017 Grade II Oaklawn Handicap on Inside Straight.

"He can ride any type," Stevens said. "He can be aggressive on a horse is he needs to be, or he can stay quiet on one. I've been around him for several years. He's great to be around in the jocks' room. He's very likable. He gets along with everybody, and he's just a really good all-around rider."

Cash, 57, has owned racehorses since 2012. But after he retired from his career as a roofer, he earned his training license, and started a horse for the first time on April 23 at Keeneland in Lexington, Ky. A six-year-old horse named Pickford became his first winner at Churchill Downs on June 18.

Cash owns each of the 40 horses he trains.

"I love horses," Cash said. "I grew up out west, not in a horse-racing family. I have the roofing company that my sons still manage and run. I decided this seemed more fun, and decided to take a swing at this and see I can make a living training horses."

"Knock on wood, if he stays healthy, he'll probably be chasing that King Cotton Stakes and the Whitmore," Cash said.

Claiming opportunities at Oaklawn were Cash's main draw to the track.

"The claiming is so strong at Oaklawn," Cash said. "I've been claiming pretty hard out at Churchill, so this is the next logical spot."