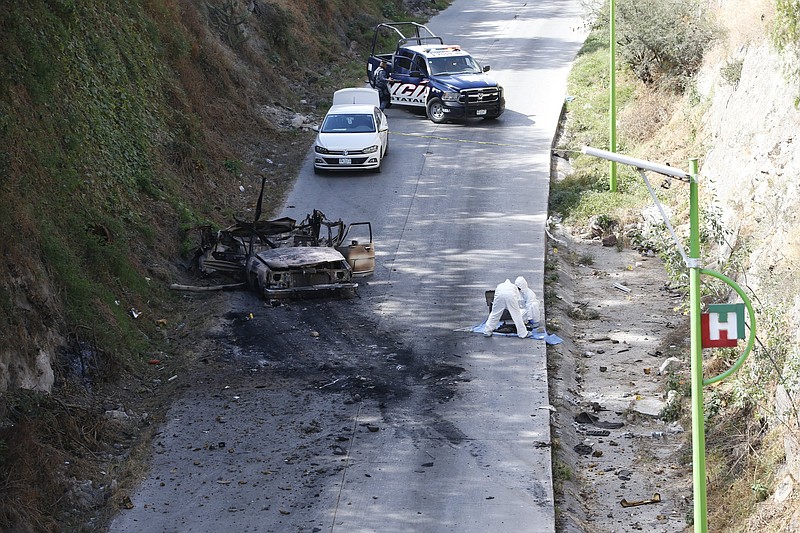 Forensic investigators work at an area where a burned-out car was found after a gang rammed several vehicles into a prison and escaped with nine inmates Wednesday in Tula, Mexico. (AP/Ginnette Riquelme)

MEXICO CITY -- A gang rammed several vehicles into a central Mexico prison and escaped with nine inmates Wednesday in one of the most dramatic breakouts the country has seen in recent years.

Authorities in the state of Hidalgo, just north of Mexico City, said in a statement that the predawn attack resulted in two police officers injured by gunfire.

The state police said soldiers, police and national guard troops had fanned out looking for the escaped inmates. Police did not identify the armed gang involved in the prison break.

Local media reported that the burned-out cars found in the city of Tula after the attack were car bombs. Authorities said they were investigating how the vehicles caught fire.

The use of car bombs by gangs in Mexico has been extremely rare, with one such attack in the northern border city of Ciudad Juarez in 2010 killing three people.

But gangs in Mexico frequently do torch vehicles to distract police, and vehicles set alight can appear to explode once the flames reach their gas tanks.

Tula is home to a large oil refinery and the area has been plagued by gangs of thieves who drill illegal taps into government-owned pipelines to extract gasoline and diesel.

It was unclear if any fuel thieves were among the escaped inmates; authorities said the escapees had faced charges of homicide and kidnapping, among others. State prosecutor Alejandro Habib said a large number of people took part in the apparently highly-planned attack.

REYKJAVIK, Iceland -- Three men were arrested after a homemade bomb was found in a residential neighborhood of Iceland's capital, Reykjavik, police said Wednesday.

The explosives were discovered Tuesday in a dumpster near an apartment building that houses the U.S. ambassador's residence, but the Reykjavik Metropolitan Police force said "there is no evidence to suggest that the case is related to the embassy of a foreign country."

Police said two of the three men arrested were on probation and have been sent back to prison. The third was released.

Police did not offer any details on the explosives, or how they were discovered, but said the investigation was continuing.

The United States Embassy in Reykjavik has been without an ambassador since President Joe Biden took office in January. Last year the embassy purchased a 5,300-square-foot villa in downtown Reykjavik that is set to become an ambassadorial residence.

SAN JUAN, Puerto Rico -- A Turks and Caicos police boat collided with a vessel carrying migrants believed to be from Haiti, spilling scores of people into the sea and leaving at least seven dead, police said.

The Turks and Caicos police said they had recovered seven bodies and were searching Wednesday for others.

At least 64 migrants were rescued in the area off Providenciales island, according to a statement issued Tuesday.

Authorities said they don't know how many migrants were aboard the vessel that collided with one of their own when officers tried to intercept it late Monday. Police said they detained 16 migrants who tried to flee after the collision.

"We were hoping for the best," said acting Police Commissioner Kendall Grant. "Unfortunately, we are now dealing with a tragedy."

The Turks and Caicos Islands are located between Haiti and the Bahamas and have long been a destination and smuggling route for Haitian migrants.

Haiti has been struggling with deepening political insecurity, a spike in gang-related violence and severe fuel shortages that have driven up prices in a country where 60% of the population earns less than $2 a day.

LOS LLANOS DE ARIDANE, Canary Islands -- A fresh river of lava from the volcano on Spain's La Palma island threatened Wednesday to engulf a parish church that has so far survived the eruption that shows no signs of relenting after 10 weeks.

The nearest lava flow to the Los Llanos de Aridane church has slowed down since it started over the weekend but it is still only 0.6 miles away.

Molten rock from the Sept. 19 eruption on La Palma, part of Spain's Canary Islands archipelago, has consumed over 1,500 buildings and covered over 2,800 acres including banana farms, the island's main source of revenue along with tourism.

"The lava is flowing mostly on top of previous flows that have hardened," Noelia Garcia, the mayor of Los Llanos de Aridane, told Canary Islands Television. "But we won't dare make a prediction [about its course]."

The volcano is going strong and seismic activity in the area has increased in recent days. Spain's National Geographic Institute registered 341 earthquakes over the past 24 hours.

Thousands of residents have been displaced by the eruption, which has not claimed any lives on the westernmost member of the archipelago in the Atlantic Ocean off the northwest coast of Africa. 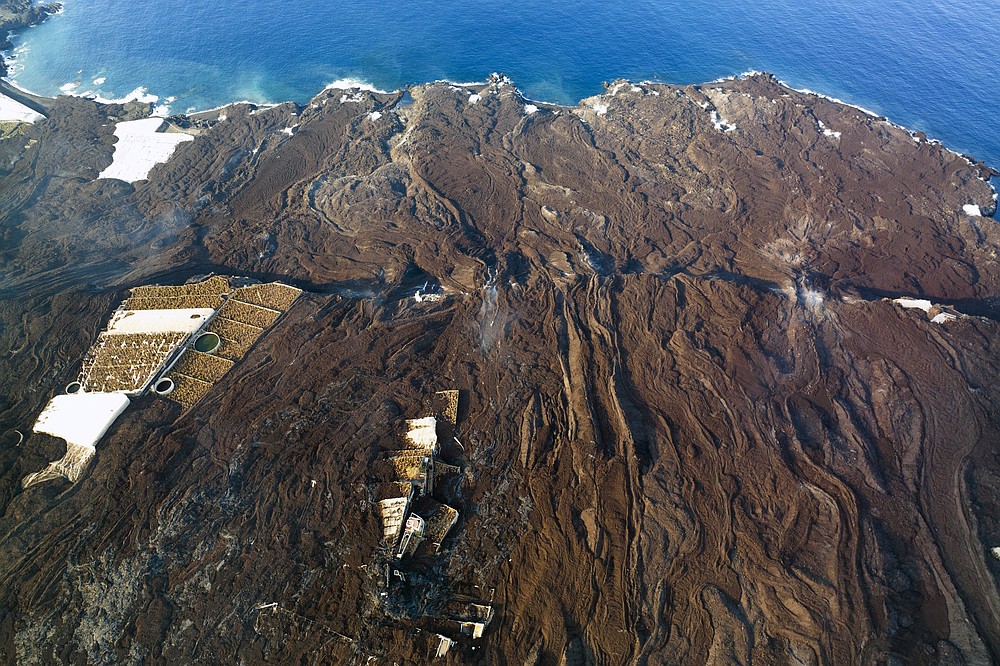 Lava from a volcano flows into the sea Wednesday on the Canary Island of La Palma, Spain. (AP/Emilio Morenatti) 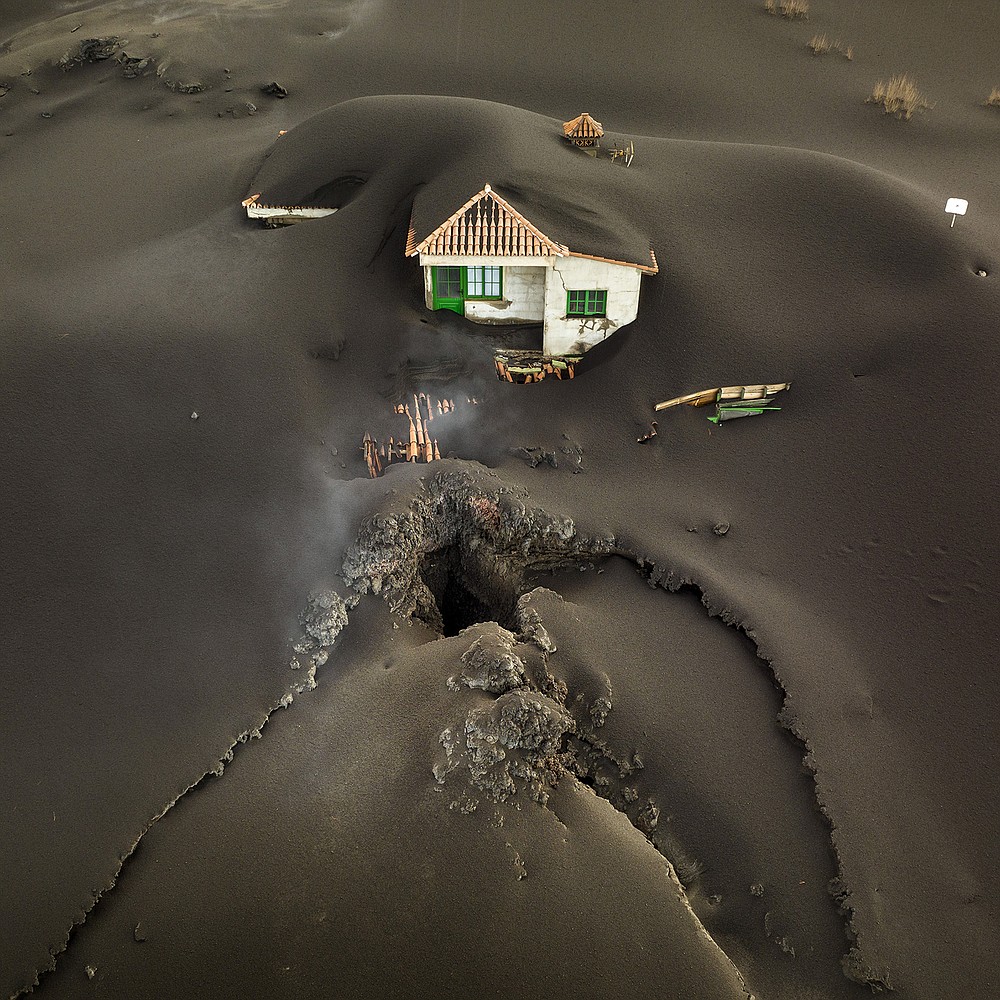 A fissure runs in front of a house covered with volcanic ash Wednesday on Spain’s island of La Palma. The fissure spouted a fresh gusher of lava that left a gaping hole in front of the house and threatened to engulf a parish church that has so far survived an eruption that has been going strong for 10 weeks. (AP/Emilio Morenatti)