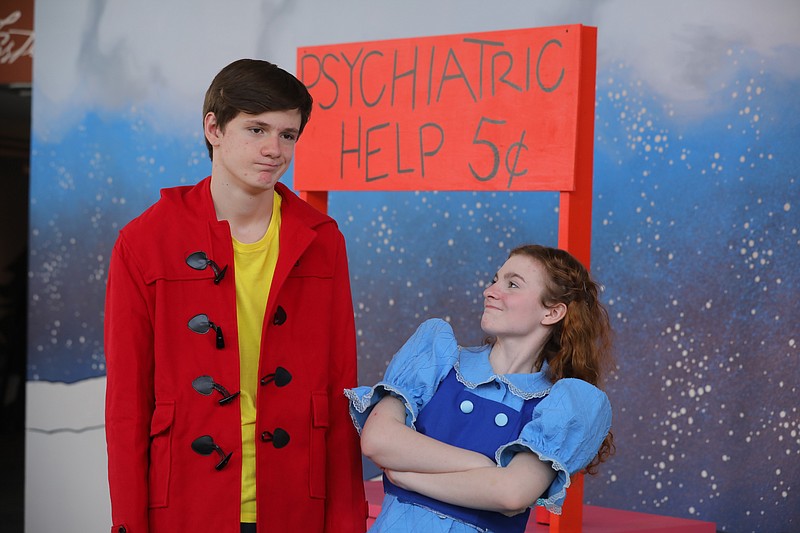 It's not, however, her first time onstage as an animal.

"I once played a sardine," she admits.

The Mount St. Mary Academy student plays Snoopy in "A Charlie Brown Christmas," opening tonight and running, sometimes once a day, sometimes as many as three times a day, through Dec. 23 at the Arkansas Repertory Theatre, on downtown Little Rock's Main Street.

The show is a stage adaptation (by Eric Schaeffer) of the classic 1965 animated TV special, based in turn on the long-running Charles M. Schulz comic strip Peanuts. Vince Guaraldi's jazz-infused score is, of course, a prominent part of the show.

Though Snoopy has no lines, he/she does get to make some comic animal-like noises.

"I don't talk, but I feel like my movements reflect what my character is all about," Small explains.

Director Anna Kimmel describes it as more of a clown-mime performance, praising Small's skills both as a comedian and mime. "She definitely hits the mark," she adds.

This is a homecoming of sorts for Kimmell, who spent four years as the Rep's director of education and is now filling the same role at Flat Rock Playhouse in North Carolina. 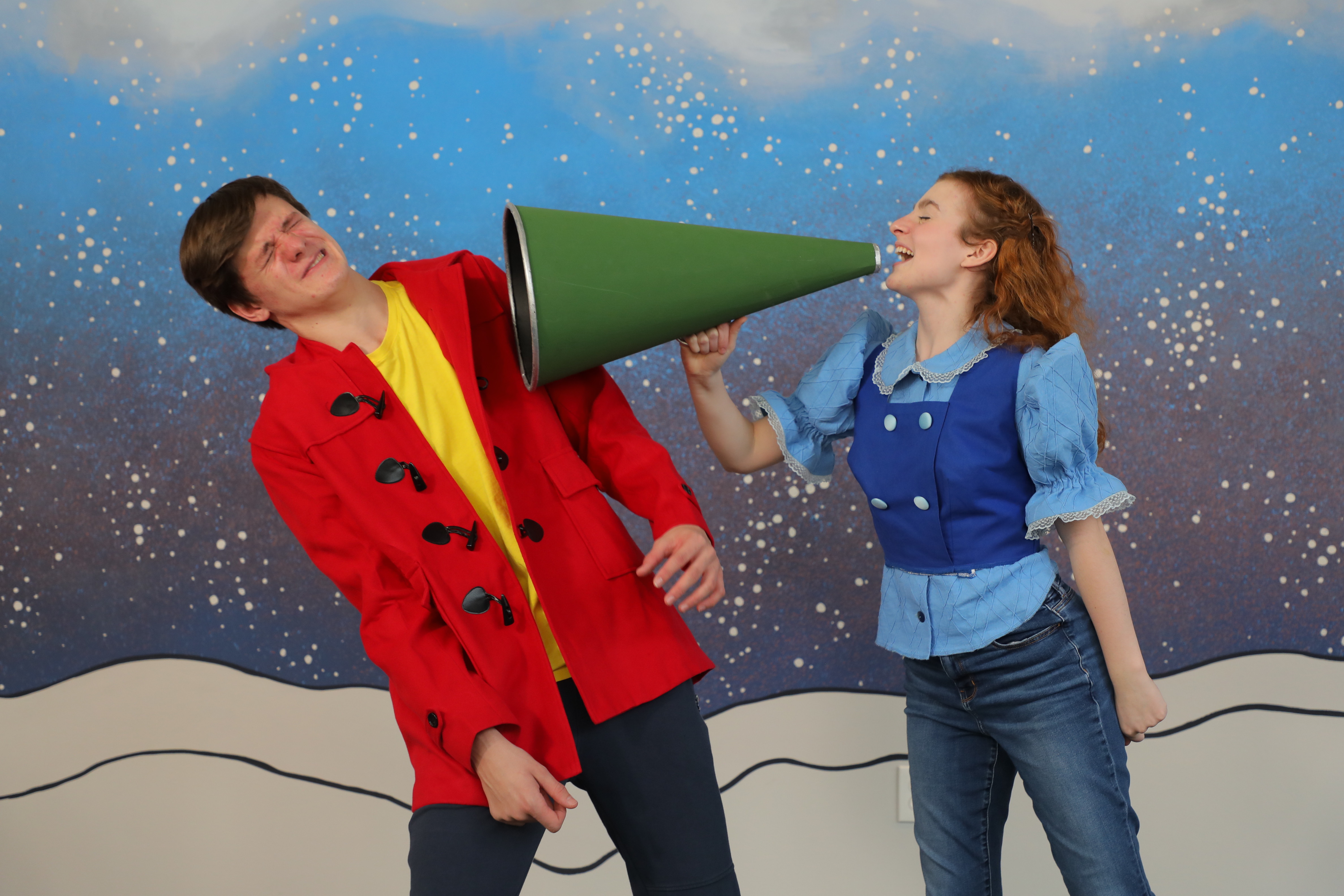 Simon Gless plays Charlie Brown with Madison Courage Fleck as Lucy in "A Charlie Brown Christmas," opening Friday at the Arkansas Repertory Theatre. (Special to the Democrat-Gazette/Stephen Thornton)
The production features entirely young performers, the cream of the local teen talent base, in the same manner as her highly successful production of "Willy Wonka Jr." at the Rep in the pre-pandemic summer of 2019.

"Aesthetically, they are incredibly different, though," she notes. "Wonka" was considerably darker than the "cartoon snowscape" that's in play here, and "Charlie Brown" employs "projections that are a fun element to add and that we didn't have for 'Wonka.'"

Gess, at 6-foot-3, might look at first glance to be an unusual choice for the round-headed title character, but he defends the casting by explaining that "I'm hunched over for the whole show."

Kimmell adds that many of the show's props are enlarged beyond normal proportions, and that Gess' interactions with the considerably more diminutive Walt Wenger as security-blanket-toting Linus "are pure comedy before they even say anything." 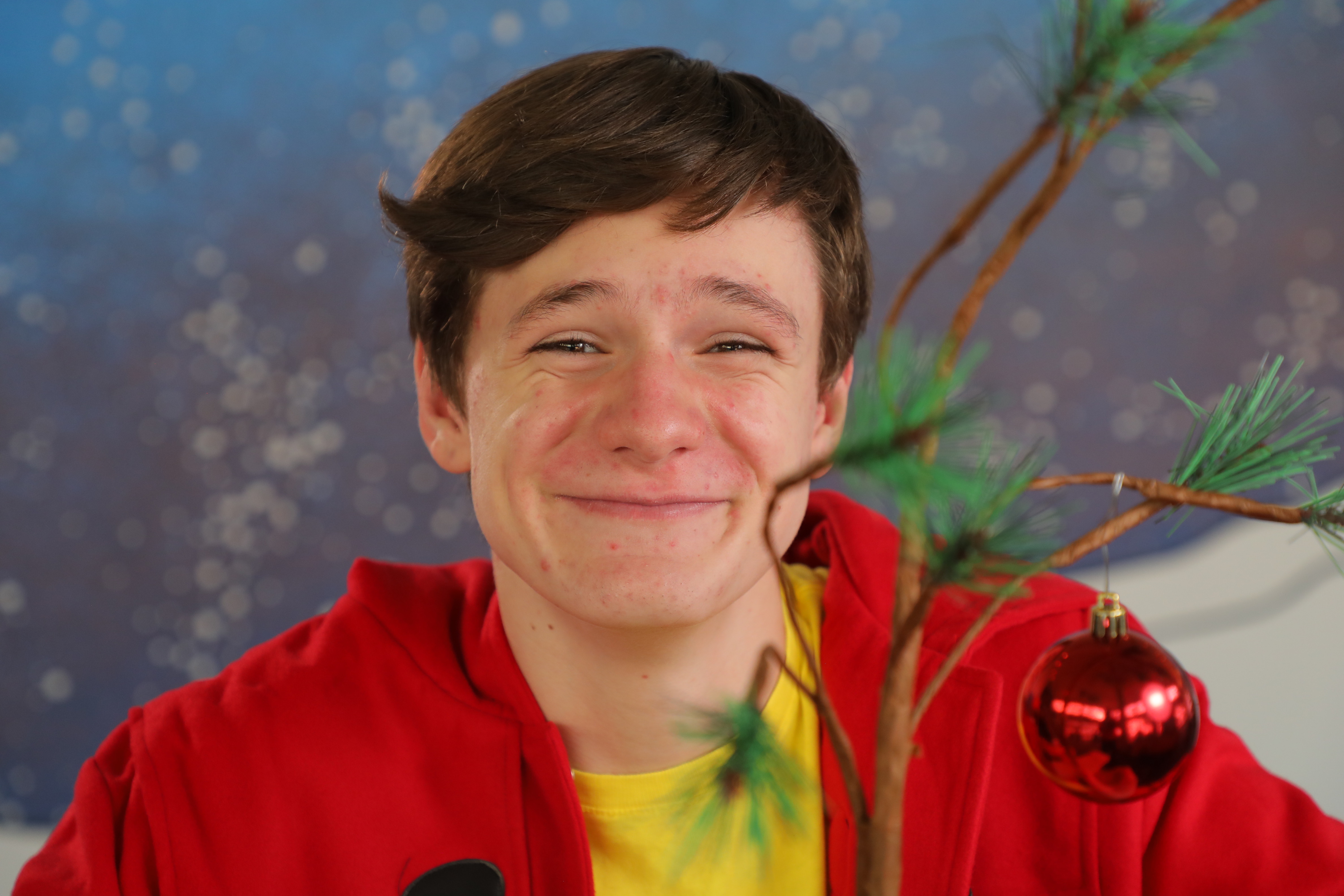 Charlie Brown (Simon Gless) learns the true meaning of Christmas in "A Charlie Brown Christmas" at the Arkansas Repertory Theatre. (Special to the Democrat-Gazette/Stephen Thornton)
Though the production is being loosely promoted as a musical, Kimmell and assistant director Bridget Davis define it more as a play with music. The cast does sing — "Christmastime Is Here" around the tree at the end, and in a holiday sing-along that, along with some additional choreography for Snoopy (including a "soft paw" number) extends the running time to about 45 minutes. (The original TV special runs a half-hour including commercials.) An on-stage jazz trio emphasizes the large part music plays in the show.

Davis, the Rep's newly appointed education associate and marketing coordinator, is fully immersed in the production. "I ran with the kids and danced with them" during the auditions and collaborated on the final casting.

Davis is a Little Rock native with a music theater degree from Oklahoma City University and she's an alumna/founding member of The Rep's young artist program. She has appeared onstage at the Rep as Dyanne in "Million Dollar Quartet" and offstage as a musical theater teacher with "Education at the Rep." She's been seen on other local stages, including those of the Weekend Theater and Murry's Dinner Playhouse, and she has one other link to this show: She played Sally Brown on the national tour.

Between matinee performances, the Arkansas Regional Innovation Hub will offer hands-on "make and take" crafts, guests can to shop for unique gifts from local artisans and a certain resident of the North Pole will be stationed at his "post office," accepting and certifying letters and posing for pictures.

Before and after evening performances the lobbies will feature live music and shopping opportunities; the first mezzanine level bar will feature $1 drinks for guests wearing ugly Christmas sweaters.

The production is the kickoff for a four-show transitional season that includes "Designing Women" by Linda Bloodworth-Thomason, Jan. 18-Feb. 6; "School Girls; or, the African Mean Girls Play" by Jocelyn Bioh, March 1-20; and Stephen Sondheim's musical "Into the Woods," April 19-May 8.