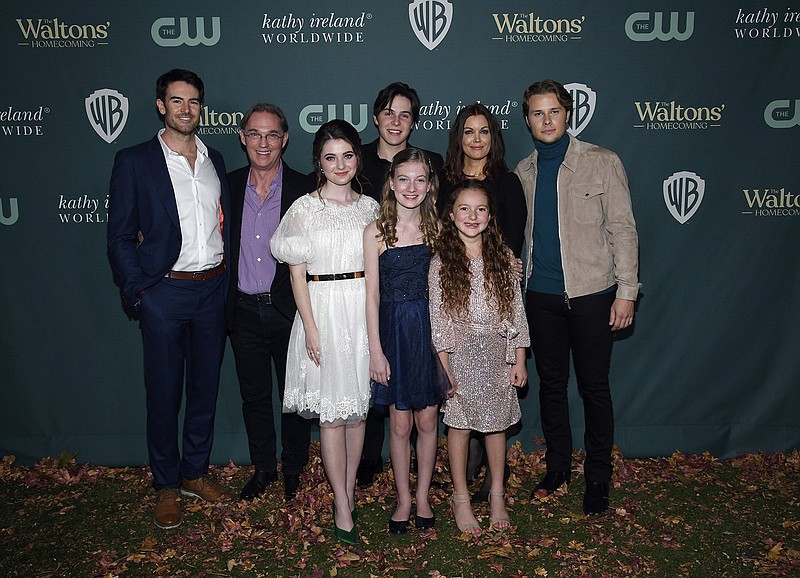 A half-century ago, CBS released a TV movie called "The Homecoming: A Christmas Story." The wholesome, family-oriented film — starring Patricia Neal as Olivia Walton — did so well it was turned into a series called "The Waltons" in 1972.

The drama, which turned Richard Thomas (John-Boy) into a major star, became a huge hit, lasting nine seasons and 221 episodes, spawning six more films through 1997 after its cancellation in 1981.

Now for the first time in nearly a quarter century, "The Waltons" are back in a redo of that 1971 film. Dubbed "The Waltons: Homecoming," the CW will air the movie for a second time at 7 p.m. Dec. 11.

The plot is simple. Set in Depression-era rural Virginia in 1933, the Waltons are a struggling family of Ma, Pa and seven kids. The mill near their home shut down and John Walton (Ben Lawson) had to work 90 miles away at another mill to feed the family. The film focuses on his efforts to get home in time for Christmas ahead of a pending snowstorm.

The new version retains the sweetness and heart of the original series. Any arguments and conflicts are mild and resolved by the film's end. There is plenty of laughter, warmth and understanding spanning generations.

"We could never have predicted what was going to happen to this country as a result of the pandemic," said Sam Haskell, the film's executive producer who recently won an Emmy for his inspiring Netflix musical "Christmas on the Square" a year ago starring Dolly Parton. "I believe people looked inside themselves and rediscovered family. What I'm trying to do with the Waltons is not only bring back the parents and grandparents who know the show but have the kids come to the TV set and watch this movie as well."

For Haskell, who was a teenager when "The Waltons" debuted, the show has special resonance. "I remember Thursday nights, we'd hear the theme song and rush into the living room to watch. It was an amazing mainstay in my life and I'm incredibly honored Warner Bros. partnered with me to do something so wonderful."

This film is a departure for the current incarnation of the CW, which mostly gears itself to younger viewers with fare like "Riverdale" and "The Flash."

Director Lev Spiro, better known for edgier shows like "Arrested Development" and "Weeds," was drawn to the ideals of the script: "This gives me an opportunity to put something out I see as possessing humanistic values. We want to worm into viewers' subconscious that maybe the world can be a better place if we treat each other with respect, empathy and tolerance."

Haskell cast two of the bigger names in the cast because they were personal friends: "Scandal" star Bellamy Young (Olivia Walton) and Lawson (John Walton), who was part of Haskell's Netflix show "Dolly Parton's Heartstrings." He saw Logan Shroyer on "This Is Us" and nabbed him to play the key role of aspiring writer and eldest son John-Boy.

He also convinced now 70-year-old Thomas to return as the narrator and open the movie.

Actor Christian Finlayson, who plays the second eldest son and wannabe musician Jason, said the camaraderie you see on the screen is authentic.

"In the couple of weeks of production, we really became that family," he said. "It wasn't hard to pretend on camera to be one."

Due to budgetary and time constraints, Haskell said they modified the ending of the movie from the original in a way that led the Walton family to celebrate Christmas at a Black church. Olivia's friend, played by Fifth Dimension singer and former "Solid Gold" host Marilyn McCoo as the preacher's wife, invites her to her church for Christmas.

This also led to a scene where Olivia has to gingerly explain to her youngest daughter why the churches are segregated. Young told Haskell she wanted to add a line to emphasize that all people are welcome in God's house. "We rewrote it," Haskell said. "It made it better. It made it much better."

They also cast a Black cop in 1933 in Virginia. Spiro said they did research and found out Black people didn't get hired as cops in the state until the 1940s. "It's a little bit of a stretch but it's within the realm of believability," he said.

Haskell is not shy about saying he hopes to replicate history if the film does well: "I'm trying to plant seeds of a TV series, something we can share with the world for years to come."