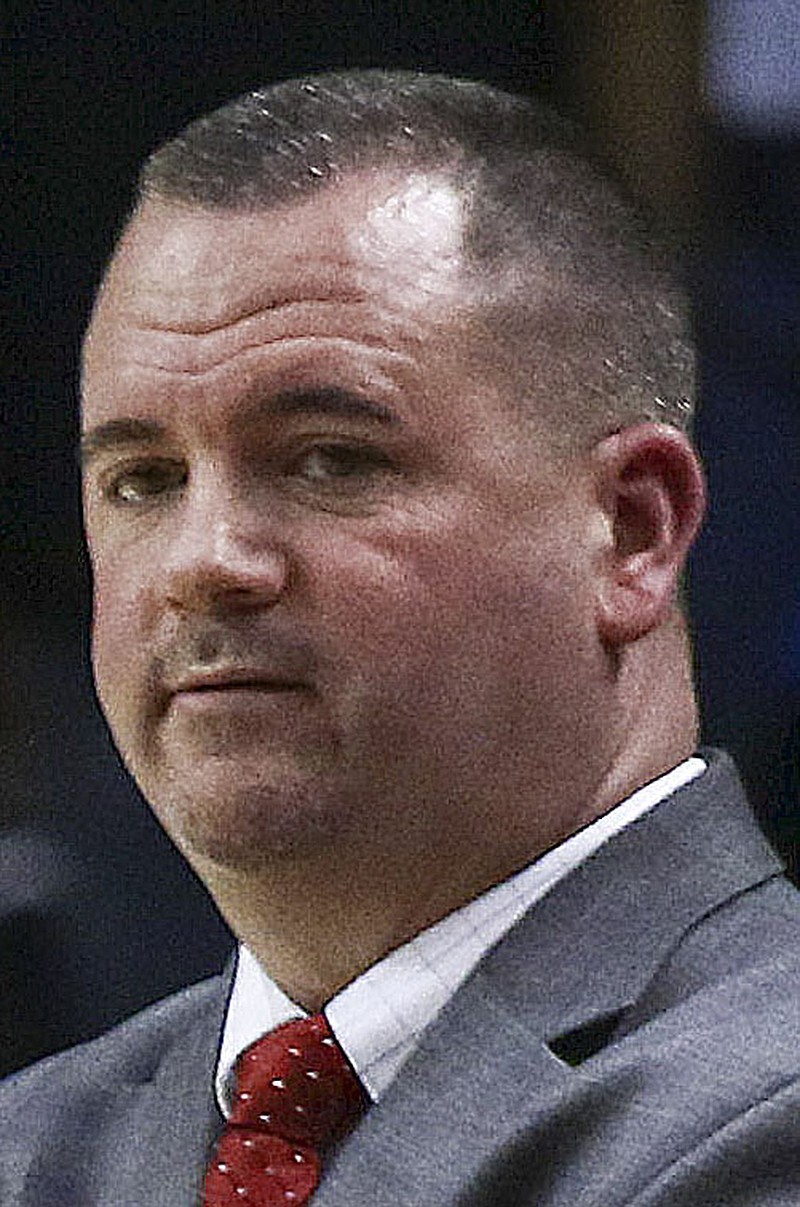 Jonesboro Coach Wes Swift is shown in this file photo.

Jonesboro will finally get a chance to get back on the court against someone other than itself today, and Coach Wes Swift can't wait.

What he is willing to be a bit patient about is his team's overall cohesion.

The Golden Hurricane will get their season underway when they take on Manila in the first round of the Barry Pruitt Hurricane Classic. The tournament, now in its 36th year, will run through Saturday and features the top three ranked teams in Arkansas, including No. 1 North Little Rock and No. 2 Bentonville, as well as Bartlett, Tenn., which is rated among the top 10 in Tennessee.

For No. 3 Jonesboro, the event will not only supply stiff competition, it'll provide an early gauge of where it is. Swift routinely doesn't schedule games before football season ends, especially if he has athletes on his roster who play both sports. The Golden Hurricane did win a benefit game at Mills on Nov. 22, but it's been intrasquad practice sessions for the most part.

"There's been a couple of times in the past 10 to 12 years where we've played in the Rumble on the Ridge down in Forrest City," Swift said. "Other than that, we start the week of the Hurricane Classic. It just allows the guys that play football to start adjusting. I've found that I don't really like playing two, three, four games without guys that are going to play meaningful minutes because it'll affect the rotation.

"The disadvantage to that, though, is that when we do play our first game, it's usually against teams that's played four or five games already. Now the advantage for us is that a lot of times, we'll have most of our guys on the floor from Day 1 to where we can start forming that rotation that everybody is looking for."

Conditioning is the biggest key for the incoming football players, but what Swift will be keeping tabs on today revolves around detail. He knows there will be mistakes throughout for the defending Class 5A champions. However, effort, defensive communication and offensive flow are areas he'll be zeroing in on against a Manila team that's ranked No. 2 in Class 3A.

Jonesboro, though, is loaded, which will make its current transition period a bit smoother. The Golden Hurricane will miss program staple Keyln McBride, who's now at Harding, but they have all-staters Jesse Washington and Amarion Wilson back, as well as Isaac Harrell, Kavon Pointer and Devarious Montgomery -- three players who combined for 25 points and 17 rebounds in last season's title game.

Jonesboro also has a deep bench, and when the second semester begins, it'll have Oklahoma State signee Quion Williams. The 6-4, 185-pound guard, who played at Jonesboro as a freshman before moving to Texas, recently transferred back.

"This is my 28th year of doing this, and I've found that it'll be the first to the middle of January before they all really start hitting their strides," Swift explained. "It won't be until then until they show what they're really capable of, and that's OK. I tell everybody the ceiling to improve is high, especially for the incoming guys. They bring a level of toughness that we like."

There's figures to be plenty of physical play during a Hurricane Classic that's expected to draw huge crowds.

"It's going to be a really good tournament," Swift said. "The cool thing about it is you go to a lot of these tournaments early in the season, and you're going to get some good competition. But a lot of times, you don't get an atmosphere.

"You'll play in empty gyms sometimes, unless the home team is playing. In this one, it won't be that way. The atmosphere will be great, and the kids on the floor will have to communicate over the noise. The things they'll have to do in the postseason to be successful, they'll have to do it here, too."

As one of the top-rated juniors in the country, there wasn't anything that Chloe Clardy needed to prove during last week's Turkey Feast Classic. But the 5-9 guard did so anyway -- and against the player who's ranked No. 1 in their class.

Clardy scored 38 points to carry No. 1 Conway (6-0) to a runaway 77-54 victory over Mikaylah Williams and Parkway, La., at Pulaski Academy's Hugg Gymnasium in Little Rock. Williams, a 6-0 forward who's tabbed as the top recruit in the Class of 2023 by ESPN and won a gold medal for the U.S. during the FIBA 3x3 Under-18 World Cup this summer, finished with an impressive stat line of 24 points, 12 rebounds, 4 steals and 3 blocks against Conway.

Still, the day belonged to the Clardy.

"And she did all of that while missing four or five layups," Conway Coach Ashley Hutchcraft said afterward. "But I think she proved herself in this one."

In Clardy's case, she posted those gaudy numbers in unassuming fashion. In fact, the way she quietly terrorized Parkway was the same way she's taken on opponents since she was moved up as a ninth-grader. She got to the basket by taking defenders off the dribble, capitalized on fast-break opportunities by sprinting down the floor, put up short runners when they were available and knocked down free throws.

Her point total may have eclipsed the 50-point plateau if not for some point-blank baskets that rimmed out. Clardy, currently a 4-star prospect and the No. 40-ranked junior by ESPN, also had 10 steals, 6 rebounds and 4 assists for the Lady Wampus Cats, who are set to play at Greenwood today.

Much like Jonesboro's boys, Hot Springs has yet to play its first regular-season game.

That'll change today when the Trojans face Mena in the Hot Springs Invitational.

"This will be our first taste of official action," Hot Springs Coach Ant Lasker said. "We played [Little Rock] Central a couple of weeks ago in a benefit game, but this is the first one that'll actually count. And we're excited to finally get things going."

Lasker will again have a young team in place, but for him, he's not looking at that as a hindrance. Instead, he said he sees it as an opportunity – one that he feels will pay off as the season progresses. He does have senior Jabari West at his disposal, and that's sure to help ease any growing pains the Trojans may have on.

West, a 6-8 power forward who's already signed with George Washington, will be the focal point inside for Hot Springs, which caught fire down the stretch last season to make it back to the Class 5A state tournament. Nasir Hannah, Beno Stephens and Devren Brown are now juniors and will be expected to contribute more, especially now that standout guard J.J. Walker has graduated. Sophomore Tyrell Honey, who was the only freshman to see significant minutes on the team a year ago, Kendell Williams and Octavious Rhodes will all have roles this season as well.

"We're going to be depending on a lot of sophomores, and we've got to use the month of December to try to get them as much experience as possible and build on it. So when the month of January rolls around, they'll know what to expect."

What Lasker is anticipating to see during his team's three-day tournament is top-shelf basketball from programs representing each corner of the state.

"Any time we invite teams to tournaments or build a schedule, everything is about preparing for January," he said. "That's why you invite a Marion team with Dave Clark, who's won a state championship. You invite a Watson Chapel led by my good friend, Marcus Adams. You've got [Springdale] Har-Ber that's got a good group, Conway has a solid group, Earle is always competing in 2A.

Marmaduke's Rick Smith became the winning girls coach in school history when his Lady Greyhounds, ranked No. 2 in Class 2A, beat Sloan-Hendrix 54-25. He now has 373 victories. ... Conway Christian's Cooper Ellis notched all but 13 of his team's points in their 66-54 loss to Magnet Cove on Tuesday. The junior, who averaged nearly 21 points last season, finished with 41 points for the Eagles. ... Mayflower, the defending Class 3A girls champion, lost its entire starting five from last season but picked up a marquee victory earlier in the week when it took down Class 3A No. 4 Episcopal Collegiate 82-72. Kiki Williamson had 20 points, 8 rebounds and 4 steals in the win for the Lady Eagles. ... Watson Chapel small forward Christopher Fountain has committed to Southern Arkansas Tech.