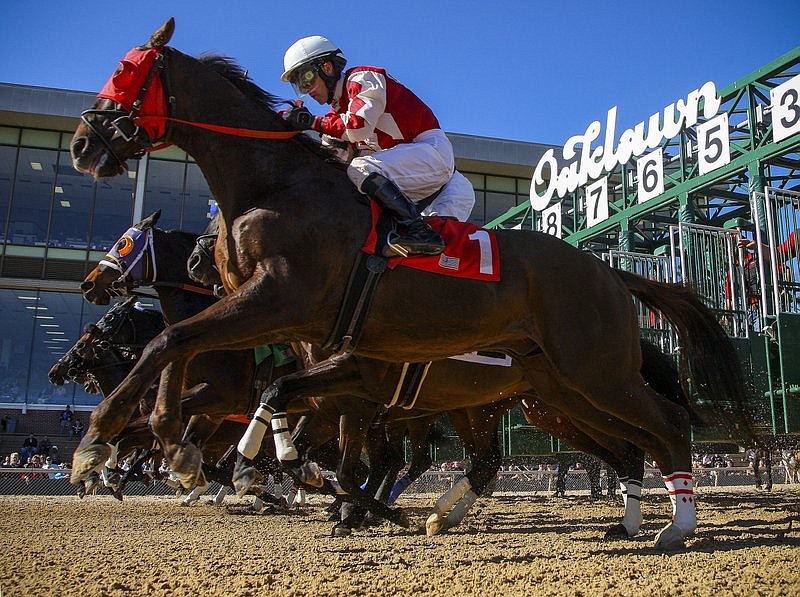 FILE — Shane Laviolette, right, aboard Prime Number, and other horses burst out of the gate at the start of the second race on opening day at Oaklawn Park in Hot Springs in 2016.

HOT SPRINGS -- Oaklawn Racing Casino Resort's live-racing schedule change will affect nearly everything about its 2201-22 season. From the standpoint of racing worldwide, no effect will resound more with horsemen than the track's rescheduled approach to Kentucky Derby qualification.

The Kentucky Derby points system was put into place for the 2013 campaign. Since then, Oaklawn's four qualifying races have come latest on the calendar among the U.S. tracks that offer four. That will change on the first day of January.

In the past, Oaklawn's four Derby qualifiers have come in the third weeks of January and February and near the middle of March and April. Those races -- the 1-mile Smarty Jones Stakes, the 1 1/16-mile Southwest and Rebel stakes, and the 1 1/8-mile Arkansas Derby -- were moved for this season to Jan. 1, Jan. 29, Feb. 26, and April 2, 2022, respectively. The series will pay a total purse of $3.25 million.

The previous schedule offered three weeks between the Arkansas and Kentucky derbies. This season, the schedule allows a five-week break.

"I think Arkansas has tweaked its scheduled to fit more of the, what I would call, now-version of how trainers like to get their horses ready for the Derby," trainer Tom Amoss said. "There was a time, 15 years ago, when running back in three weeks was more of the norm, but it's not anymore. It seems like Oaklawn is just adapting to the changing times."

Amoss and nine other trainers will start 10 2-year-old horses, each potential candidates for Kentucky Derby qualification, in the $150,000 Advent Stakes on Friday, opening day for the 2021-22 season. Two-year-old horses will race throughout December at Oaklawn, many from stables whose connections aspire most to Derby participation.

Oaklawn president Louis Cella said he did not consider the track's new Derby-prep schedule when he announced the overall schedule change last summer. Months later, he said it has become a significant part of an experiment he is confident will increase Oaklawn's appeal to racing fans.

Ron Moquett, who trained Oaklawn regulars Far Right and Whitmore to Derby starts in 2015 and 2016, respectively, said the Oaklawn series has become financially rewarding enough to stand alone as a worthy goal.

Moquett said the five-week break between the Arkansas and Kentucky derbies should appeal to horsemen.

"The 3-year-old campaign here is aimed at the Derby, the Kentucky Derby," he said. "Horsemen and Oaklawn want to make sure that whoever runs in the Rebel and the Arkansas Derby has enough time and rest to run their best race in the Kentucky Derby. Nowadays, with the way trainers do things, I think most would prefer a little more time."

Some trainers believe a three-week gap between races is adequate for young horses. Oaklawn jockey Florent Geroux, who will ride Amoss-trained Higher Standard as a potential favorite in the Advent, remembers when American Pharoah, trained by Bob Baffert, carried his eight-length win in the 2015 Arkansas Derby to the first Triple Crown sweep in 37 years.

"I think it's better timing, but some guys like five weeks before the race, and some guys like three," Geroux said."It's up to the owners and the trainer. I know guys, like Baffert, had no problem running his horses here in the Arkansas Derby and firing them right back in the [Kentucky] Derby."