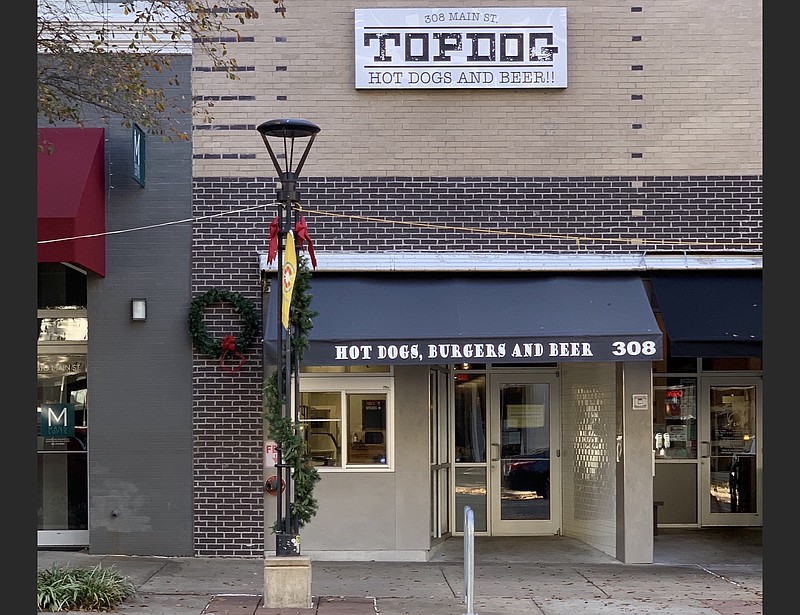 Once upon a time you couldn't find a hot dog in downtown Little Rock. Now wiener joints are proliferating — first the announcement that Original Hot Dog Factory would open its first Arkansas outlet at 14th and Main streets, then the opening of Lea Lea's Gourmet Dogs & Daiquiris, 215 Center St.

Now comes TOPDOG Hot Dogs and Beer, on the verge of opening — in the next couple of weeks, management reveals — in the "shotgun" space at 308 Main St., Little Rock, that had previously been a deli/lunch outlet for next-door Bruno's Little Italy and subsequently Donuts & Deli.

The website, topdoghotdogcompany.com, shows the food lineup to include 100% Angus beef hot dogs, Korean-style corn dogs, "smash time" burgers, a cheesesteak and a chicken sandwich; presumably it will also serve beer. (There's a pending-license announcement posted on the front door.) Pictures of menu items are also available on the Facebook page, facebook.com/TOPDOGLR.

Speaking of The Original Hot Dog Factory, 1424 Main St., Little Rock, there still is not even an approximate new opening target — the operation has missed several and we've been unable to pin down franchisee Devin Wilkerson, aka Devin Marcel, on a timeline. The website, theoriginalhotdogfactory.com, still only lists locations in Atlanta, Smyrna and Marietta, Ga. We're still awaiting a phone number; the last post on the Facebook page — facebook.com/hotdogfactorylittlerock — was Sept. 29.

Arkansas Business' Jan Cottingham solves the mystery of what is going into the former Cathead's Diner space in the Paint Factory building, 515 Shall Ave., Little Rock: Sterling Market, a new food-hall-style restaurant from Fidel Samour, owner of Fidel & Co, the coffee shop across the street, in Little Rock's East Village. With a target to open in the spring, the establishment will have four foci: a butcher shop, a greens/sandwich station, an artisan pizzeria and a bakery, plus a full bar and an area selling grab-and-go food. Head chef will be John Burt, with Paige Russell-Burt as pastry chef; they'll invite area chefs to use the premises for "kitchen takeovers." 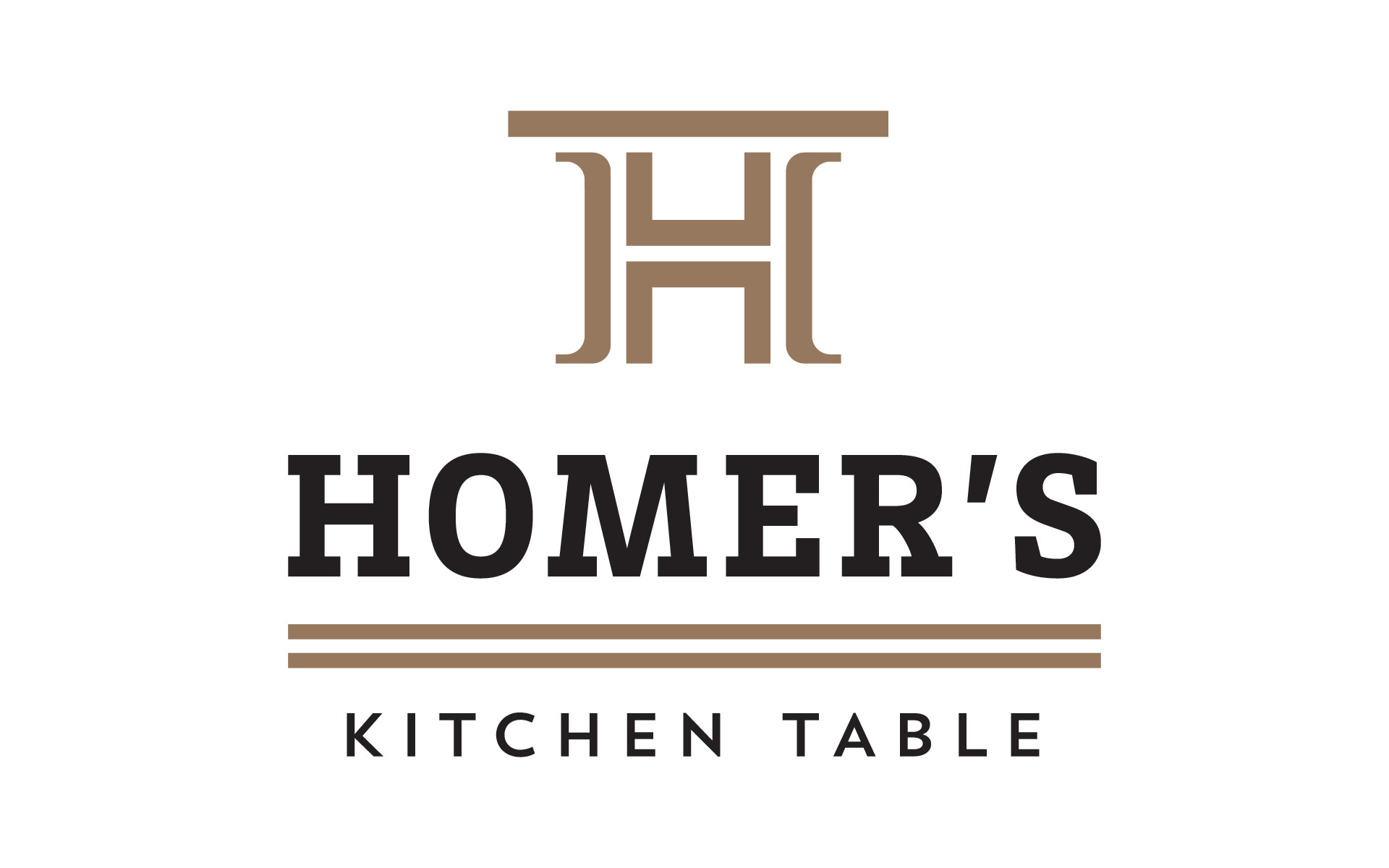 Homer’s Kitchen Table, which is what Homer’s West will become once it moves from the Galleria Shopping Center to the Market Place Shopping Center, both on North Rodney Parham, has unveiled its new logo. (Special to the Arkansas Democrat-Gazette)
Homer's West co-owner David Connell reports construction delays in the westward move from the Galleria Shopping Center, 9700 N. Rodney Parham, Little Rock, to part of the defunct Franke's Cafeteria in the Market Place Shopping Center, 11121 N. Rodney Parham Road, and that the target now for the opening of Homer's Kitchen Table there will be sometime in February. The process has been "slow and expensive," he says, but when all is said, done and completed, the restaurant will be a "shiny new penny." To recap: Homer's will occupy the portion of the building at the end cap of half a shopping center, that faces Rodney Parham Road. (The space Homer's West isn't taking over, the part facing Market Street, will be a fitness center, to be called Breakout Bar.) Connell has explained that a bigger kitchen will allow them to "evolve" their menu, while keeping the staples that make Homer's Homer's, to add more homemade desserts and pies and more elaborate dinner specials. "We will be making more things from scratch than we were allowed to" in the current kitchen, he explains. The new space will have a takeout window, will "better feature our bar area," and they'll be able to increase their catering business. The restaurant phone number is (501) 224-6637. The website is homersrestaurant.com; the Facebook page is facebook.com/HomersWest.

A notice in the Hot Springs Sentinel Record shows an application for a $25,000 building permit for something called The Heist, at 723 Central Ave., Hot Springs. That's also the address of a high-end restaurant called The Vault at 723. Nothing has happened, however, to The Vault, which occupies the lower level of the former bank building at Central Avenue and Bridge Street; we're told the building owner, who had been leasing out the upstairs floor to a now-closed club called Rhythm & Rocks Jazz Bistro, has taken the space over entirely and is putting in a high-end bar. We'll fill you in on any details as they become available.

Mockingbird Bar & Tacos, 1220 Main St., Little Rock, will host its first Tap Takeover since the pandemic began, 5-9 p.m. today, dedicating four taps to the local debut of brews from Eureka Springs' Gotahold Brewing, which opened in summer 2020. Beers will be available in 5-, 12- or 14-ounce pours, as well as four-beer flights; the restaurant's full menu will be available for pairings. Master brewer/co-owner Dave Hartmann, as well as Liz and Mike Preston of Prestonrose Farm & Brewing, will be on hand to meet, greet and talk shop with craft beer enthusiasts. Call (501) 944-8500, email info@mockingbirdLR.comor visit mockingbirdLR.com.

And speaking of craft beer, Little Rock's Museum of Discovery is sponsoring a Feb. 26 home brew competition, the first to focus on non-beer beverages — "cider, seltzer, mead and wine are welcome, but leave the barley at home for this one," according to a notice from craft brewer Stone's Throw. Prizes will go for Best Cider, Best Seltzer, Best Other and People's Choice. Proceeds benefit the museum. We'll fill you in on registration and other details as they surface.

And donate a coat and get a free Mini Blizzard, Wednesday- Dec. 15 at Dairy Queen restaurants at 1000 W. Main St., Cabot, and 2014 Arkansas 5 North, Benton. The Cabot DQ — (501) 286-6141 — is partnering with Hope's Closet; the one in Benton — (501) 794-6230 is partnering with the Salvation Army. The franchisee, You Scream Holdings, LLC, is running a "Stuff the Bus for Charity at Your Local DQ" promotion, putting a school bus outside stores as the weather trends chillier, the idea being to "stuff the buses" full of coats for those in need. Visit DQArkansas.com.