After racial reckoning, digital overview of Fulbright's life launched ahead of display near University of Arkansas statue 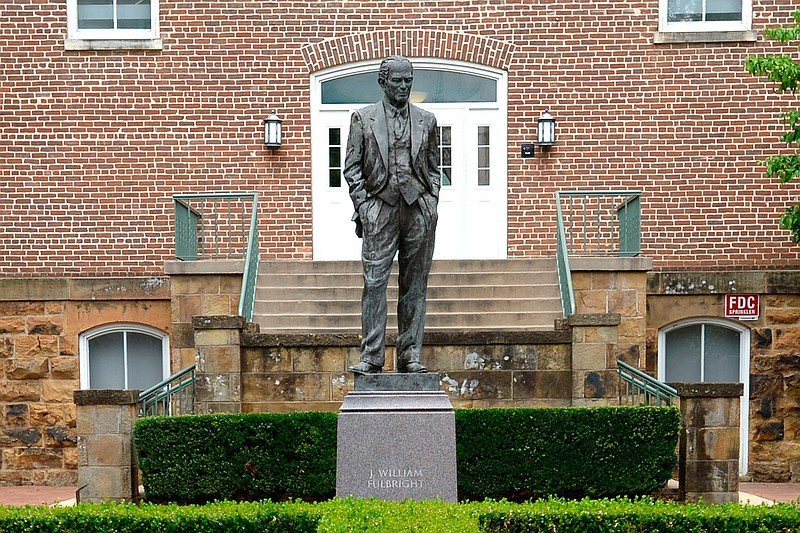 A statue of J. William Fulbright stands, Wednesday, July 1, 2020, near the west entrance of Old Main on the University of Arkansas campus in Fayetteville, Ark. A committee, comprised of students, faculty and staff members, and alumni, at the university has recommended to remove the statue of Fulbright, a former Senator who once voted against the interests of Black students and supported values antithetical to the university. (Andy Shupe/The Northwest Arkansas Democrat-Gazette via AP)

Top university leaders earlier this year decided against pursuing a previous recommendation by a campus committee to remove the statue given the longtime senator’s record of opposing civil rights.Black student leaders last year called for removal of the bronze likeness of Fulbright, who is perhaps best known for introducing legislation in 1945 that created the international educational exchange program named after him.“The University of Arkansas recognizes that Sen. Fulbright’s record on civil rights issues does not align with the university’s core values and that many have little awareness of this history,” begins the online overview of Fulbright’s life and career.“Meanwhile, some are unaware of his extensive actions to promote peace and international security, including through educational exchange, and other laudable aspects of his record of service,” the first paragraph of the digital biography goes on to state.The university announced that next year it will install a physical display near the statue, which sits in a rear courtyard of the Old Main academic building, to give added context to the life of Fulbright. Until then, there will be “temporary signage” placed near the statue with a link to the new digital overview of his life and career, the university announced Friday.The steps taken by the university are to fulfill a resolution passed in July by the University of Arkansas Board of Trustees.The resolution directed that the statue remain in its current location “and that the University add contextualization to the statue that affirms the University’s commitment to racial equality and acknowledges Senator Fulbright’s complex legacy, including his record on international affairs, Civil Rights legislation, and racial integration.”Trustees in their resolution also noted a state law restricting the removal of monuments on public property.UA System President Donald Bobbitt recommended to the board that the statue remain in its current location, but with the added context. The university’s former chancellor, Joe Steinmetz, had earlier recommended that the statue be moved to an unspecified new location.Several state lawmakers in a June committee hearing told Bobbitt and Steinmetz that they opposed any change to the statue’s location. Some spoke to denounce “cancel culture,” and Sen. Mark Johnson, R-Little Rock, said no waiver would be granted should there be a request to move the Fulbright statue.The online overview is titled “The Fulbright Paradox,” with sections labeled “Arkansas Connections,” “Fulbright Program and Internationalism,” and “Segregation and Civil Rights.” It also include an “Other Resources” section featuring a bibliography of books about Fulbright.Today’s announcement did not include information about who wrote the overview.The “Arkansas Connections” section — presented before the other sections — states that Fulbright served as president of the University of Arkansas. It also notes that Fulbright, while a student at UA, had served as student government president and was a member of the football team.The section goes on to list Fulbright’s time in the U.S. Senate, where he served from 1945-74, as well as noting that Fulbright was the recipient in 1993 of the Presidential Medal of Freedom, which was presented to him by U.S. President Bill Clinton, described as a “fellow Arkansan and former University of Arkansas faculty member”He served as a Democrat, though the online overview does not state Fulbright’s political party.The “Fulbright Program and Internationalism” section, presented next, gives more detail on the Fulbright exchange program, including words used by Fulbright to describe the effort as aiming “to bring a little more knowledge, a little more reason, and a little more compassion into world affairs and thereby increase the chance that nations will learn at last to live in peace and friendship.”The overview states that “more than 400,000 ‘Fulbrighters’ from more than 160 countries have benefited from what has become one of the most widely known and prestigious of all scholarships.”The “Segregation and Civil Rights” section begins with a subsection titled “Early Opposition to Desegregation,” stating that Fulbright opposed statehood for Alaska “because he believed its congressional delegation would vote in favor of civil rights legislation.”In 1956, Fulbright joined an effort opposing the landmark U.S. Supreme Court ruling Brown v. Board of Education, which had found that racial segregation of schools was unconstitutional.Fulbright “joined more than 19 Southern senators and 77 representatives in signing a counter statement to the ruling — the Declaration of Constitutional Rights, informally known as the Southern Manifesto — that essentially opposed racial integration in public places.The entire congressional delegations from Alabama, Arkansas, Georgia, Louisiana, Mississippi, South Carolina and Virginia, and many other congressional members from Florida, North Carolina, Tennessee and Texas signed on in support of the manifesto,” states the digital biography.Fubright also “did not challenge” the state’s governor, Orval Faubus, in 1957 when Faubus tried to prevent Black students from attending Little Rock Central High School, the overview states.“Along with most Southern legislators, Fulbright voted against the historic Civil Rights Act of 1964,” the overview continues. “He participated in a filibuster of the act that outlawed discrimination based on race, color, religion, sex, and national origin, prohibiting employment discrimination, unequal voting registration requirements, and segregation in schools and public accommodations.”The overview’s next line states: “However, in 1972, Sen. Fulbright voted in favor of strengthening the enforcement powers of the Equal Employment Opportunity Commission.”The overview also notes that Fulbright opposed the Fair Housing Act of 1968, which would have prohibited discrimination in housing sales and rentals, and he opposed the Voting Rights Act in 1965But it notes that Fulbright “in 1970 voted for a five-year extension of the Voting Rights Act, supporting the continuation of special provisions outlawing discriminatory voting practices, especially in the South.”The section concludes by noting that Fulbright in 1967 voted in favor of the nomination of Thurgood Marshall to the U.S. Supreme Court — Marshall became the first Black U.S. Supreme Court justice — and that Fulbright in 1970 “voted against the Supreme Court nomination of G. Harrold Carswell, who had once advocated for white supremacy.”