Tests part of strategy by Compiled by Democrat-Gazette Staff From Wire Reports | December 3, 2021 at 7:06 a.m. 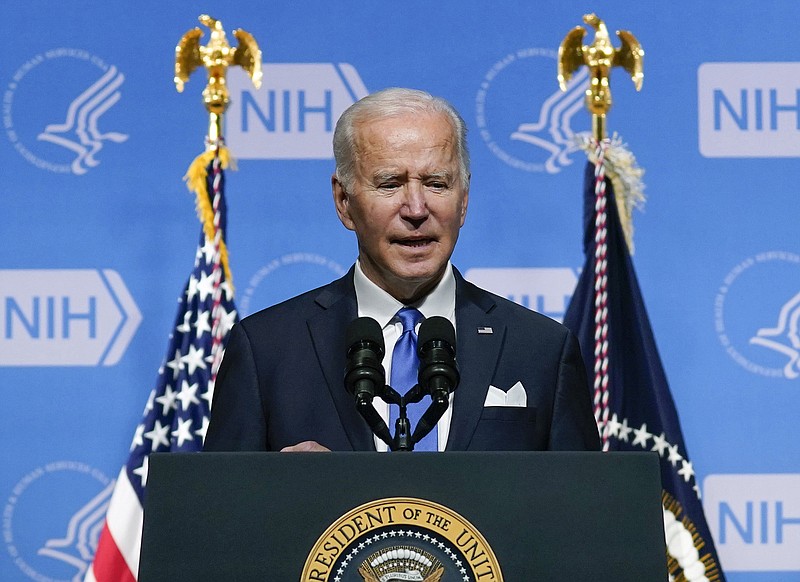 “We’re going to fight this variant with science and speed, not chaos and confusion,” President Joe Biden said Thursday during a visit to the National Institutes of Health in Bethesda, Md. (AP/Evan Vucci)

President Joe Biden announced an array of measures Thursday to protect Americans from a potential winter surge of coronavirus infections, as five states confirmed cases linked to the omicron variant and international researchers shared data that the still-mysterious variant may lead to more reinfections.

The U.S. recorded its first confirmed omicron infection on Wednesday, in a Californian who had been to South Africa, where the variant was first identified a week ago. Several more cases were reported Thursday -- five in the New York City area and one each in Minnesota, Hawaii and Colorado -- under circumstances suggesting the variant has begun spreading within the U.S.

Getting the pandemic under control is a top priority for Biden. He struck a theme of unity in his remarks Thursday, urging Americans to come together around his plan.

White House officials, and Biden, have said the plan is aimed at keeping the economy and schools open. Yet on Capitol Hill, Republicans threatened to shut down the government over Biden's vaccination rules for large employers, even as the president spoke.

Vaccination mandates have been held up in court, and Biden took pains to note that his current plan does not rely on lockdowns or vaccination requirements.

Experts have argued for months that vaccinations, masks and testing are essential, and say the need for testing will become urgent if the new omicron variant is found to evade protection from vaccines.

[Video not showing up above? Click here to watch » arkansasonline.com/123plan/]

"We're going to fight this variant with science and speed, not chaos and confusion," Biden said at the National Institutes of Health.

Under the president's plan, 150 million Americans with private insurance would be reimbursed for buying at-home covid-19 tests. To ensure access for those who lack insurance, or who are covered by Medicaid, the administration intends to distribute an additional 15 million tests to community health centers and rural clinics.

Experts envision a world where people test themselves as soon as they exhibit symptoms -- and then, if they test positive, would go into isolation and seek treatment with new antiviral medicines. Early testing is important because the antivirals reportedly work best just after onset of symptoms.

The White House says it is taking steps to secure 13 million courses of antiviral treatments.

"Free and highly available rapid tests would be a game-changer," said Charity Dean, a former California health official and the CEO of the Public Health Company. "If we had rapid tests at every door for every school, every movie theater, any person can go and get them -- just like they can in many other countries -- it would enable people to have personal responsibility and know when they're infectious."

In the United States, home tests have been relatively hard to come by because of supply shortages, and they are expensive -- as much as $25 for a package of two.

Dr. Carlos del Rio, an infectious disease specialist at Emory University, said that rather than have people go through the cumbersome process of seeking insurance reimbursement for tests, "we should just subsidize them and make it incredibly cheap."

[Video not showing up above? Click here to watch » arkansasonline.com/123omicron/]

In Britain, he noted, rapid tests are free, and in Germany they cost consumers about $1 apiece.

Reimbursement for at-home tests in the United States will not happen immediately and will not be retroactive, senior administration officials said, adding that federal agencies would issue guidance by Jan. 15 to clarify that insurers would have to reimburse people for at-home tests during the covid-19 public health emergency.

The rule that private insurers cover at-home testing is being drafted, and details remain to be worked out, officials said.

People insured by Medicare and Medicaid would not be eligible, but the White House said as many as 150 million people with private insurance would see easier and cheaper access to the at-home tests.

"The bottom line is this winter, you'll be able to test for free in the comfort of your home and have some peace of mind," Biden said.

A big part of the plan is a renewed push to get people vaccinated, including the latest group to become eligible, children ages 5-11.

The administration plans to launch "hundreds of family vaccination clinics" that will offer vaccinations and boosters for people of all eligible ages, according to a fact sheet provided by the White House.

The plan also includes a national campaign to reach the 100 million Americans who are eligible for booster shots and have not gotten them.

Officials believe that persuading vaccinated people to get another dose will be easier than vaccinating the roughly 43 million adult Americans who haven't gotten a shot.

Senior citizens are in the population most vulnerable to the virus, and the Centers for Medicare and Medicaid Services will send a notice to all 63 million Medicare beneficiaries encouraging them to get booster doses, the White House said.

[Video not showing up above? Click here to watch » arkansasonline.com/123pandemic/]

The campaign will include paid advertising and free rides to vaccination sites coordinated by AARP, the advocacy group for older Americans. And the Federal Emergency Management Agency will launch what the administration is calling Family Mobile Vaccination Clinics, beginning in Washington and New Mexico.

The goal is for states and localities to replicate the model "with full federal funding and support," officials said.

So far about 42 million Americans, about half of them senior citizens, have received booster doses. The Centers for Disease Control and Prevention this week broadened its booster dose recommendation to cover all Americans at least age 18, starting six months after their second dose of the mRNA vaccines from Pfizer or Moderna.

Biden also called on employers to provide paid time off for employees to get boosters and extend the current mask mandate for people on airplanes, trains and buses, and in terminals and transit hubs, through mid-March.

The Biden administration also is imposing new testing rules on international travelers to the United States, requiring them to present evidence of negative tests within a day before their departure.

He said the CDC is studying alternatives to quarantining in schools, including "test to stay" policies where exposed students remain in school, wear masks and test again to avoid infection. He promised the free at-home tests would be available in January.

Celine Gounder, an epidemiologist and infectious-disease specialist who advised Biden's transition team on covid-19 response, said she was unhappy that the White House prioritized restrictions and testing for international travelers, while overlooking domestic flights.

"When you think about Texas, it's the size of France -- and it operates as its own country in many respects," Gounder said, calling for a renewed focus on how state policies contribute to the virus' spread. "If you're really trying to prevent spread of dangerous variants, you should be providing similar standards across the board," she said.

Asked about additional restrictions on domestic and international flights, White House press secretary Jen Psaki said Thursday that "nothing is off the table" when it comes to controlling the virus' spread.

Psaki said the administration is considering what is "most implementable" but noted that "our most important factor is what is going to be most effective."

Many experts predict a winter surge, regardless of whether omicron spreads widely in the country. The nation has been reporting an average of more than 80,000 new cases a day over the past few weeks, according to a New York Times database. Six months ago, the average was roughly 12,000 new cases a day.

Much remains unknown about omicron, which was first spotted by scientists in southern Africa and is now known to be present in more than 30 countries. It has mutations that scientists say may allow it to spread more quickly and cause more breakthrough infections in vaccinated or previously infected people, though neither characteristic has yet been confirmed.

While about three dozen countries worldwide have reported omicron infections, including India on Thursday, the numbers are small outside of South Africa, which has confirmed more than 170 cases. World health authorities have yet to link any deaths to omicron.

While all eyes are on the new and little-understood omicron variant, the delta form of the coronavirus isn't finished wreaking havoc in the U.S., sending record numbers of patients to the hospital in the Midwest and New England.

"Omicron is a spark that's on the horizon. Delta variant is the fire that's here today," said Dr. Nirav Shah, director of the state Center for Disease Control and Prevention in Maine, where a state-unprecedented 334 people were in the hospital with covid-19 as of midweek.

For now, the delta variant accounts for practically all cases in the U.S. and continues to inflict misery at a time when many hospitals are struggling with shortages of nurses and a backlog of patients undergoing procedures that had been put off early in the pandemic.

The fear is that omicron will send even more patients, and perhaps sicker ones, to hospitals.

Covid-19 cases and deaths in the U.S. have dropped by about half since the delta peak in August and September, but at about 86,000 new infections per day, the numbers are still high, especially heading into the holidays, when people travel and gather with family.

With the onset of cold weather sending more people indoors, hospitals are feeling the strain.

"Delta is not subsiding," said Dr. Andre Kalil, an infectious-disease physician at the University of Nebraska Medical Center.

Nebraska on Tuesday reported 555 people in the hospital with covid-19 -- the highest number there since last December, when the vaccine rollout was just beginning.

Vermont on Thursday recorded its highest daily number of covid-19 cases at 604, two days after hospitalizations hit a pandemic-high of 84. New Hampshire, once an early vaccination leader, is now second only to Michigan in the most new cases per capita over the past two weeks.

In Minnesota, which ranks third for most new cases per capita, the Pentagon sent medical teams last month to two major hospitals to relieve doctors and nurses, and another team is set to arrive Friday.

"This fourth wave, I can pretty clearly state, has hit Minnesota harder than any of the previous ones," said Dr. Timothy Johnson, president of the Minnesota chapter of the American College of Emergency Physicians.

He said hospitals are struggling because of a combination of a lack of nurses, fatigue and patients undergoing treatments that had to be postponed earlier in the crisis."Now those chickens are coming home to roost a little bit," he said.

Information for this article was contributed by Sheryl Gay Stolberg of The New York Times; Zeke Miller, Alexandra Jaffe and Heather Hollingsworth of The Associated Press; and by Dan Diamond, Lena H. Sun, Tyler Pager and Laurie McGinley of The Washington Post. 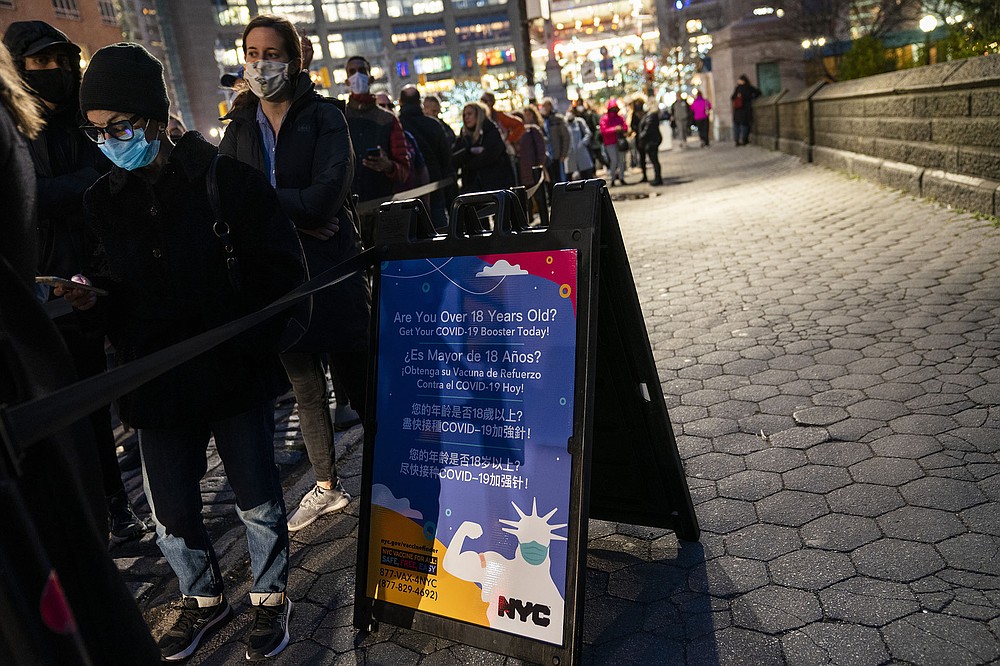