Celebrating the life (and oddity) of Kurt Vonnegut 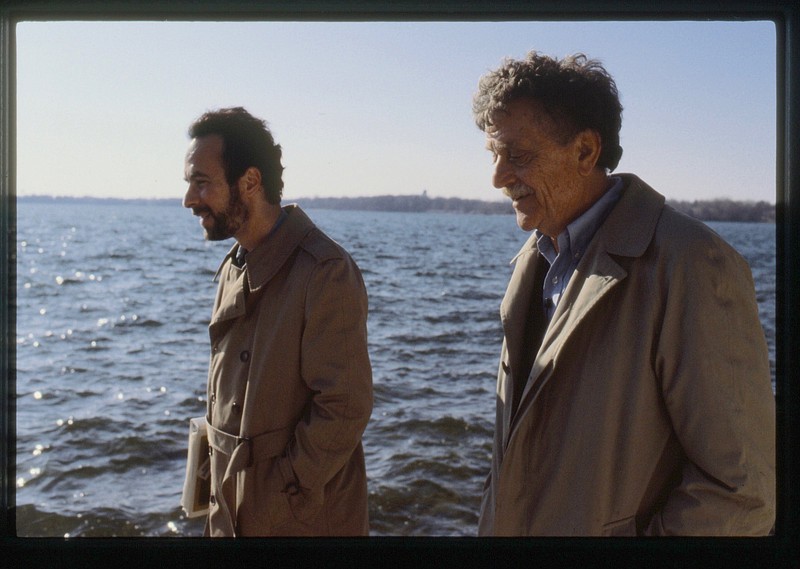 Robert B. Weide, shown here with the subject of his new documentary, worked for nearly 40 years on “Kurt Vonnegut: Unstuck in Time.”

Although Kurt Vonnegut Jr. died in 2007 at the age of 84, it's as if he has been constantly bending "Unstuck in Time" -- writer-producer-co-director Robert B. Weide's new documentary about the author of "Slaughterhouse Five" -- toward his own sensibilities.

For a fellow who made his living sitting uncomfortably behind a typewriter, Vonnegut was oddly photogenic. Like his novels and stories, his speeches were as entertaining as they were weighty.

His acerbic manner, seen throughout the movie, may have hurt him in selling Saabs, but it made for livelier speeches, writing and Q&As. The film also tosses out cradle-to-grave chronology in a manner that resembles the books, like "Galapagos," allowing the author to weigh in on the world long after he has left it.

Weide explains that the delay in getting his movie about his literary hero to audiences was not intentional, but his success as a director and supervising producer for the early seasons of "Curb Your Enthusiasm" kept him away from the mountains of material on the author.

"And so by nature, it had to become something other than what I originally intended. There was no way to foresee how it would evolve, let alone the fact that he would have died before I was finished. I was saying to somebody that this is a much richer film in so many ways than what I was planning. The trade-off was that it took two thirds of my life to finish, which is not fun. But at the end of the day, I'll take that trade-off."

Weide is now 62, but he started what became "Kurt Vonnegut: Unstuck in Time" when he was in his 20s. He has also made documentaries about The Marx Brothers and Woody Allen and even wrote and produced an adaptation of Vonnegut's novel "Mother Night" while the author was still alive (careful viewers can spot Vonnegut in a Hitchcockian cameo).

Weide describes what it is about Vonnegut's prose that has drawn him and others toward devouring his writing.

"I was steeped in comedy, so when I read 'Breakfast of Champions,' which is a very funny book, I just marveled at the blend of comedy and rather serious issues. He was dealing with questions that I was dealing with, the big existential questions: What are we doing here? What's our purpose? How are we supposed to behave with one another? Why are we really killing off this beautiful planet? Even the fact that this was all filtered through this great sense of humor, specifically, kind of a Midwestern sensibility. He's cut from a very similar cloth as Mark Twain. He's a humanist, and I just love the blend of comedy and serious issues," he says.

"I've always said there is what I refer to as spinach literature, which is the stuff that doesn't taste that good, but it's good for you. Nobody reads 'Moby-Dick' because they think this will be an exciting, fun story. You read it because you're supposed to. Vonnegut himself says he never read 'Madame Bovary' until he was about to teach writing at the University of Iowa Writers Workshop. Kurt's stuff is so approachable."

The film also reveals much about the Indiana-raised author that fans of his books or people who have caught every lecture that has been posted to YouTube might know. "Slaughterhouse Five," his commercial breakthrough and his best-known book, was inspired by having survived as a prisoner of war during the Allied firebombing of the German city of Dresden. "Unstuck in Time" shows grisly footage of the aftermath of the attack. In the film, Vonnegut's children say they didn't know how much the incident affected him until they read the book.

"He talks about how soldiers are babies; they're kids. You think of World War II, you think of John Wayne or Henry Fonda and all these middle-aged men. Well, you look at all the bodies stacked up in Dresden. He was one of the people pulling bodies out of air raid shelters and basements and piling them up and torching them. He was probably, I guess, 22 at the time. I don't know what you were doing when you were 22. I was hanging out with my friends. I was going to movies. I was having fun. I wasn't prepared to even see a dead body, let alone thousands," Weide explains.

"The irony is that he was bombed by his own people, so to speak. It was primarily a British raid, with American involvement, but these were the Allies."

Weide's work on documentaries, like the long-gestating "Unstuck in Time," led him to creating comedy of his own with "Curb Your Enthusiasm" star and creator Larry David. While David co-created and wrote several episodes of "Seinfeld," his current series has no screenwriting credits.

"Larry and I have been friends since the early '80s when he was absolutely unknown, unemployable and unappreciated," Weide recalls. "We laughed at the same things, and he asked if I wanted to direct this one-hour special with him for HBO. He wanted it shot like a documentary and because I made documentaries, he figured I would know how to make it look like a real documentary."

While Vonnegut won't be able to see "Unstuck in Time," Weide recalls that he was on the right track when he screened "Mother Night" for its author. The film captures the warped humor of the book, which featured Black Nazis and the oddest use of Bing Crosby's "White Christmas" ever committed to film. All of that content was in print.

Weide recalls, "Kurt was sitting next to me, and he really started chuckling at that. And I thought, OK, we're good. That was the only review that I needed."

Print Headline: Celebrating the life (and oddity) of Kurt Vonnegut