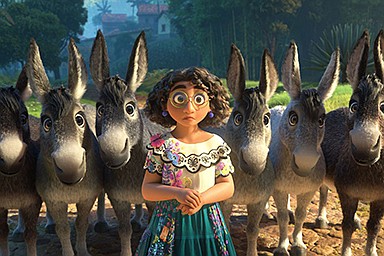 Mirabel (voice of Stephanie Beatriz) is surrounded by a bunch of wide-eyed donkeys in this scene from “Encanto,” which came in at No. 1 last weekend with about $40.3 million at U.S. theaters.

Hollywood has stopped running from the pandemic: For the first time since March 2020, movie theaters had a wide array of new films for exclusive screening over the holiday weekend.

But even "Encanto," a new Disney animated film with a score by Lin-Manuel Miranda of "Hamilton" fame, failed to light up the box office over the normally strong Thanksgiving weekend, a sign consumers are still cautious about going to cinemas.

The long holiday weekend often accounts for around $250 million in ticket sales domestically. Overall business last weekend was about $142 million, according to data firm Comscore -- a bit more than half of typical business but also almost seven times better than Thanksgiving 2020, when many theaters were still shuttered.

"Encanto," a musical about a family in Colombia with magical powers, generated an estimated $40.3 million in ticket sales over the five-day holiday weekend, Disney said Sunday. That was below some estimates even though the picture scored well with critics and was released only in theaters. Forecasts for the weekend ranged from a low of $35 million from Disney to $56.4 million from Boxoffice Pro.

"This is a fair opening by pandemic standards, and a weak opening by Disney historical standards," David A. Gross, who runs the film consultancy Franchise Entertainment Research, said in an email Sunday.

"Most of the franchises that we've had at the Walt Disney Company have been built through the theatrical exhibition channel of distribution," Bob Chapek, Disney's CEO, told analysts Nov. 10. "At the same time, we're watching very, very carefully different types of movies to see how the different components of the demographics of that market come back."

"We're still unsure in terms of how the marketplace is going to react when family films come back with a theatrical-first window," Chapek said.

Columbia's "Ghostbusters: Afterlife," another installment in the supernatural comedy franchise, came in at No. 2 and made $35.3 million in its second weekend, according to the studio.

"House of Gucci," from Metro-Goldwyn-Mayer, was recommended by 60% of critics at Rotten Tomatoes. "Gucci" -- with Lady Gaga leading an ensemble cast -- was a healthy third. It sold about $21.8 million in tickets over the five-day period. MGM, which spent roughly $70 million to make the R-rated crime drama, not including robust marketing expenses, noted Sunday that only 34% of ticket buyers were 45 or older.

"As with families, older moviegoers have been reluctant to return to the movies, watching more entertainment at home," Gross said. "The film would be opening 50% higher under normal circumstances, but this is very good."

"Originality still counts in the public's mind," said Erik Loomis, distribution chief for MGM. "We were really pleased with the results. If you asked me going into the weekend, I was praying that the predictions were right because you just don't know today. You just don't know how the market's going to react."

Screen Gems' "Resident Evil: Welcome to Raccoon City" opened with sales of $8.8 million. It was recommended by just 26% of reviewers.

Theaters faced heavy competition last week from streaming services. Disney Plus rolled out the three episodes of director Peter Jackson's much-anticipated "The Beatles: Get Back" documentary, along with "Hawkeye," a new Marvel series. And "King Richard," starring Will Smith as the father of tennis stars Venus and Serena Williams, was available on HBO Max as well as in cinemas.

Other notable debuts included United Artists Releasing's "Licorice Pizza," which opened in limited release and raked in $335,000 across four locations in New York and Los Angeles. Paul Thomas Anderson's romantic dramedy, starring Alana Haim (of the pop band Haim) and Cooper Hoffman, notched an impressive 91% on Rotten Tomatoes, while a grade from CinemaScore has yet to be posted.

"After all the talk of the reticence of certain demographics to go to the movie theater -- more mature audiences and family audiences -- both came out [last] weekend," said Paul Dergarabedian, senior media analyst for Comscore. "This Thanksgiving weekend at the box office should be very encouraging to the industry, for whom these audiences have been the toughest to bring back to movie theaters."

Focus Features expanded the Oscar contending "Belfast," Kenneth Branagh's semi-autobiographical tale of his childhood in the Northern Ireland city, to 1,128 locations in its third week. "Belfast" earned $1.3 million over the five-day weekend, bringing its total thus far to $5 million.

The only film opening in wide release this weekend is the Focus Features art house drama "Wolf," starring Lily-Rose Depp and George MacKay.