OPINION | NEW MOVIES: ‘Get Back’ like being there with The Beatles 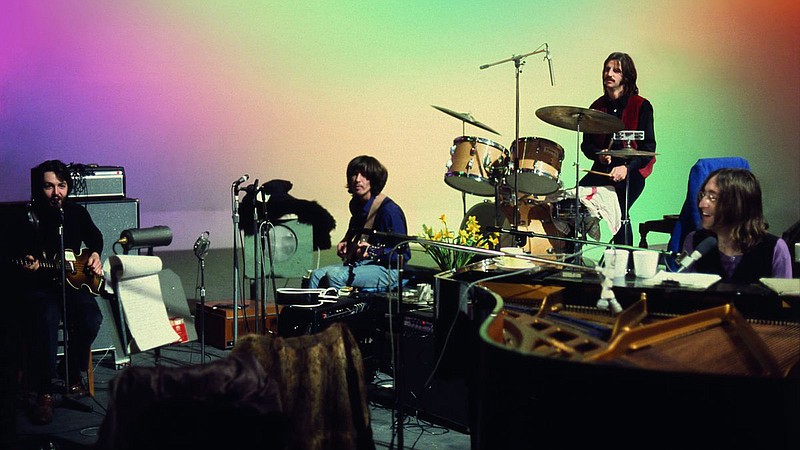 Paul McCartney, George Harrison, Ringo Starr and John Lennon hang out on a soundstage at Twickenham Film Studios where they’re rehearsing for their first live concert since 1966 in this scene from Peter Jackson’s new documentary “The Beatles: Get Back.”

Like probably almost everyone else who was inclined to watch it, I've been transfixed by Peter Jackson's three-part docu-series "The Beatles: Get Back" on Apple TV.

It is better, at almost eight hours long, than it would have been at two. It is better as a kind of slow cinema, in which we are imperceptibly tugged along by a narrative thrust so mild it might seem imagined. If you are someone who grew up with the idea of The Beatles, who has felt their secondhand presence (or ­mourned their actual absence) at more than a few times in your life then you might be fascinated by this long cinema verite soak.

It is, in a way, like being there. You hang out with the lads long enough to notice things; like the communal Fender Bass VI and the seeming ease with which they plucked indelible riffs and chord changes out of the ether. Paul McCartney makes genius look banal, and even a heroin-dampened John Lennon betrays flashes of remarkable creative insight. George Harrison is prickly, cursed with the little brother role. Ringo Starr is all soul and compassion and professionalism.

If, like a lot of my cohorts have, you've ever tried to play rock 'n' roll music with your friends, you'll recognize the dynamic. And you feel humbled by how blasted good these kids were -- or rather are, because film is the closest thing we've ever managed to a time machine, and there's a level of your brain that makes no distinction between experiencing the scene on a TV screen and actually being back there in 1969.

Still, it's probably safe to say that as big as the Beatles loom, most people probably don't care much about them. And I wonder how "Get Back" might be received by those not disposed to seeking out the immersive experience it offers. Say, what if your dad was insisting you watch it with him, while he adds his own running commentary about the significance of the song that John's noodling on in the corner, that will eventually become "Jealous Guy"?

The more I think about it, the more I realize that's probably not a likely scenario.

How many families actually watch shows together on the regular now anyway? Is the big TV in the family room still the electronic hearth around which the tribe is expected to gather? Or is it more every person for themselves, with their own screens, in their own way, in their own room?

Some people will come together over the Beatles, but not most of us. There are too many other channels available.

But here's the thing: As good a job as Jackson and his crew have done with "The Beatles: Get Back," what they're not doing is telling the truth about the end of the Beatles. They're taking old footage, which itself was shot from a particular perspective, combing through it and selectively using it to tell a story -- or really a number of stories -- about the people we're watching onscreen.

Obviously there was a lot more going on that went unrecorded, and we should always consider how any camera seems to bend the gravity in a room. Some people will be drawn to it, others will shy away and nearly all of us -- even those of us determined to "act naturally" when fixed in its gaze -- will tailor our behavior into performance whenever a camera is present.

This is something we need to understand about documentaries, and about journalism. In most cases it is only fair to let a subject know they are a subject -- you don't want to trick them with hidden cameras or mislead them into thinking a conversation is confidential when it is actually on the record. So the documentary maker must assume that every one in the frame is, to some degree or another, acting. They are posing, presenting a version of themselves to the camera. Maybe they want to seem a bit better than they usually are, maybe they want to "be seen" as a way of representing some tribe or value, maybe they want to affect an air of cool indifference. Maybe they are grinding hard to come across as "authentic."

One way in which our technology is changing us is that we are more used to being filmed and photographed these days. Cameras are ubiquitous, we clutch one in our hands as we move through the world. It wasn't so long ago that having one's picture taken was a special thing; now we document our dinners. It's not unusual for us to make our own movies, to post our videos to social media. Normalizing the attention of cameras may or may not make us less wary of them, but I'm not sure it will make us more true to ourselves, whatever that means.

Maybe the aboriginal idea of the camera as a soul thief isn't all wrong; being watched and recorded changes us.

Watching "The Beatles: Get Back," we might gain a little bit of insight into how ordinary the creation process can seem, even for the highly skilled and gifted. We might appreciate how, up close, these lives and routines don't seem so different from our own, that work is work regardless of whether the bridge you're building is made of steel and concrete or tones and rhythms.

And that's valuable, especially to people who worry that their own talent is deficient.

There is mystery in every human endeavor, and some questions can never be answered definitively. Good art is more about interrogating human experience than answering questions.

But we shouldn't think we glean anything more than facile answers from even the more scrupulously reported and presented documentaries -- life will not be solved by movies -- and Jackson's "Get Back" is no more (or any less) "truthful" than the 1970 documentary by Michael Lindsay-Hogg -- "Let It Be" -- to which it is offered as a corrective.

Both films are works of art, collages built of moments. If you're in the right place, and give them the right attention, they can make you feel as though you know things you don't.

You have to keep telling yourself it's only a movie.