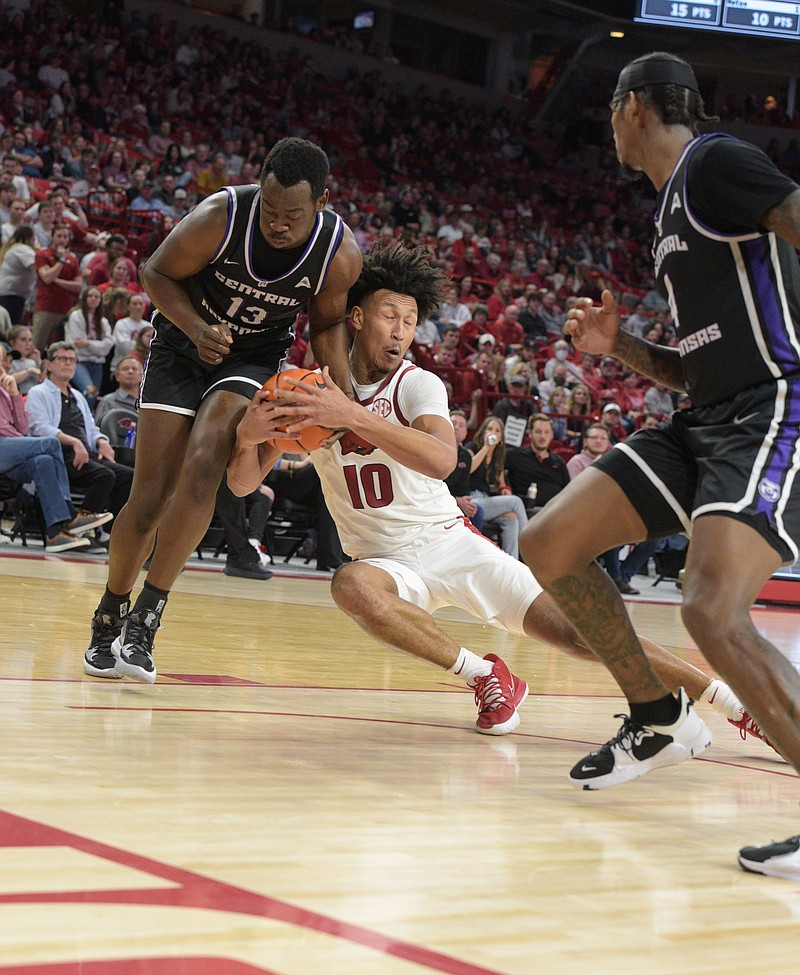 Arkansas’ Jaylin Williams (10) fights for a loose ball with Central Arkansas’ Eddy Kayouloud during the Razorbacks’ victory over the Bears on Wednesday night. Arkansas hosts UALR on Saturday, marking the first time since 1925-26 that the Hogs have faced multiple in-state teams in the same season. (NWA Democrat-Gazette/Hank Layton)

FAYETTEVILLE -- The University of Arkansas went 70 years without playing a scheduled men's basketball game against another in-state college.

This week Arkansas is doing it twice in a four-day span.

Arkansas' 100-75 victory over UCA last season marked the Razorbacks' first scheduled game against an in-state team since they opened the 1950-51 season by beating Arkansas Tech University 50-45.

The Razorbacks beat Arkansas State University 67-64 in overtime in the 1987 NIT, but that game was not scheduled by Arkansas.

Arkansas has played in-state programs in several sports the last three years, but this is the first time the basketball team is playing two in-state colleges in the same season in 96 years.

"It's good for those people from all over the state that have gone to Central Arkansas and Little Rock. I think there's an added dimension when you play someone in-state."

UALR Coach Darrell Walker was an All-American guard for the Razorbacks and helped Arkansas to a 73-18 record and three NCAA Tournament appearances in his three seasons from 1980-81 through 1982-83 playing for Coach Eddie Sutton.

"Coach Walker, let's face it, he's one of the greatest players in the history of this University of Arkansas program," Musselman said. "If he wants to bring his team to Fayetteville to play, we owe him that.

"It's non-negotiable. That should happen because Coach Walker meant so much to the history of Razorback basketball."

Walker said he appreciated Musselman's acknowledgement of his contributions to Arkansas.

"I've got a great relationship with Muss, and I respect that he said that about me and playing my team," Walker said. "It's always special for me to come back up to Fayetteville.

"That's where I grew up and became a young man and that time led to a lot of success I've had in my life. It's a special place."

"Everybody is always excited about the Razorbacks, but people also are talking about basketball at other schools in the state when we play games like this," Boone said. "That's what's really great about Arkansas reaching out and playing us and playing Little Rock.

"It's ironic both games are in the same week, but it's a good thing, too."

Walker said that when he played for the Razorbacks, he couldn't have imagined them scheduling other in-state teams.

"You've got to give Hunter and Muss credit for doing it," Walker said. "I tip my hat to both of those guys."

Arkansas sophomores Davonte Davis and Jaylin Williams -- from Jacksonville and Fort Smith -- said they're glad to play other in-state teams, especially going against players they faced in high school or have worked out with in the summer.

"It's wonderful just playing against guys that we know," Davis said.

"We're out there having fun with each other," Williams said. "Talking smack -- like, friendly smack."

Musselman praised the UCA and UALR coaching staffs for working well with his staff to schedule the games.

"Both programs are really great at communicating with us to make these two games this week happen," Musselman said. "The people on our staff feel really, really comfortable with the communication between the staffs. The camaraderie between UCA and Little Rock and our men's basketball programs ... we've got really, really good synergy."

"Man, Muss has it rolling at Arkansas like Coach Sutton and Coach Richardson did," Walker said. "I pull for Arkansas all the time and I'm glad to see the Razorbacks doing so well."

Arkansas beat UALR 79-64 in an exhibition game on Oct. 20, 2019, when the Walton Arena court was named in Richardson's honor, but Saturday will mark the first matchup that counts on the teams' records.

"I wish it was an exhibition game right now," Walker said, laughing. "We've got a lot of guys out. I'm losing count."

UALR also will be without 6-10 senior Nikola Maric -- averaging team-highs of 12.8 points and 6.5 rebounds -- because of a hamstring injury.

"Do I want to play Arkansas as good as they are right now with half a team? No," Walker said. "But injuries are part of basketball. and it's my job to keep coaching the team we've got right now.

"I don't expect anybody to feel sorry for us. We've still got to go out there and compete. I'm trying to figure out how to keep my team afloat and hopefully nobody else gets hurt."

"We've been mixing and matching as best we can, and when you play a game, you never know what can happen," he said. "It's going to be great competition in a great environment for our kids."

Walker said he would love for UALR and Arkansas to play on an annual basis.

"That would be awesome," he said. "I hope we can make that happen."