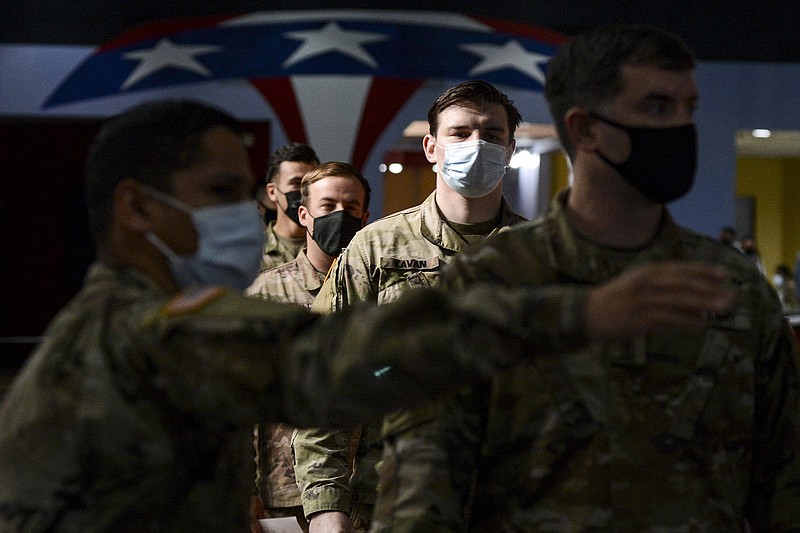 Soldiers line up for a medical screening before getting the coronavirus vaccine at Fort Bragg, N.C., in February. The Army says about 4% of its active force, about 19,000 soldiers, have not been vaccinated. (The New York Times/Kenny Holston)

As many as 19,000 active-duty Marines and Navy sailors chose not to get vaccinated against the coronavirus by Sunday's deadline, even though military leaders have threatened to expel anyone refusing to comply with the Biden administration's mandate.

While the vast majority of service members have complied, even a few percent of the military's 2.1 million troops translates into tens of thousands of people.

In the Marines and the Navy, the number of holdouts is about 9,500 each, according to official counts. And while the Marines' margin of 5% unvaccinated had been anticipated, it was an unexpected outcome for the Navy, with almost 3% unvaccinated.

These personnel now join more than 8,000 in the Air Force who have refused to get vaccinated. In all three services, many are awaiting decisions on exemption requests, though officials have emphasized that the number of permanent waivers granted is likely to be nominal. And Army data show that 4% of its active force -- about 19,000 soldiers -- have not received shots, with the Dec. 15 deadline less than two weeks away.

Officials have said those who are unvaccinated are not deployable, underscoring the challenge not only for unit-level commanders facing workforce challenges, but for senior officials in Washington and beyond responsible for setting the military's priorities and maintaining an adequate presence across the world.

David Lapan, a retired Marine Corps officer and former communications chief for the service, said the Navy and Marine Corps must pursue answers as to why the order, issued in August by Defense Secretary Lloyd Austin at the behest of President Joe Biden, was rejected by thousands of service members, and whether failures in education, communication or leadership -- or all three -- are to blame.

Individuals avoiding the vaccine "may have a deleterious effect on a unit as a whole," Lapan said, pointing to the USS Theodore Roosevelt, which last year was forced to go offline when hundreds of sailors got infected while the aircraft carrier and its crew were deployed in the Pacific.

In some cases, such as when personnel have haircuts that flout regulations or when their barracks are unkempt, the defiance of lawful orders can be minor and affect few others, Lapan said. "It can get worse if the stakes are bigger," he said. "And with covid, it's bigger."

The combined number of unvaccinated sailors and Marines is the equivalent of about four modern aircraft carrier crews.

The Marine Corps falls under the Navy Department, and their personnel routinely operate together in close, enclosed spaces at sea, where the virus can easily spread. Both services are poised to become centerpieces in the Pentagon's focus on China through expanded missions across the Indo-Pacific region.

Capt. Andrew Wood, a Marine Corps spokesperson, said the service had granted nearly 800 temporary exemptions, some of which are medical waivers given when vaccines are not currently recommended -- as for people who are pregnant or currently infected -- and just 14 permanent medical exemptions.

Thousands of Marines in the unvaccinated population are uncategorized, Wood said, which means their status has not been reported. The number also includes recruits and officers in initial training. The number of outright refusals is too "fluid" to release now, Wood said, but appears to be concentrated among the most common ranks in the Corps -- privates, corporals and sergeants.

"Marines pride themselves on being a ready force," Wood said. "We don't quite yet have a solid understanding of how many Marines are going to be administrative separated, or the impacts on readiness."

Officials are optimistic that compliance numbers will improve as waiver requests are denied, forcing the hands of those who had hoped to avoid vaccinations but ultimately are unwilling to sacrifice their military careers.

Temporary exemptions in the Navy exceed 500, according to official data, with seven permanent medical exemptions. Commanders are gathering cases of outright refusals, and that number should be clearer within a week or two, said Lt. Cmdr. Andrew DeGarmo, a Navy spokesperson.

"While there is no short-term impact to readiness due to unvaccinated sailors, we are constantly evaluating the long-term impact to the force," DeGarmo said. "The health and safety of the force is our top priority to sustain mission readiness."

Some leaders have expressed confidence that the vaccination refusers are well-distributed and not concentrated in a single community, like pilots or engineers. If that's true, that would lessen the severity of their losses, said a Navy official who spoke on condition of anonymity to discuss the service's ongoing evaluation.

Thousands of troops have filed religious exemptions across the Defense Department, but none has been approved so far, according to defense officials. The Navy and Marine Corps have not approved any religious waivers for any vaccine for the past seven and 10 years, respectively.

The Marine Corps is the Defense Department's least-vaccinated service. Marines who were not fully vaccinated by Sunday or did not have a pending exemption request soon will face administrative separation, Wood said.

Commanders could punish but still retain some based on personal circumstances, such as a Marine who missed the deadline but now is on a path to becoming fully vaccinated.

A senior commander, typically a one-star general, will decide who is separated or retained, Wood said, noting that senior officials recognize the reality that the service needs experienced, trained Marines ready to deploy at any moment.

The deadline has not ended the push to get more vaccinations, he said.

"There are no Marines we are trying to throw away," Wood said. "We're a small force already."

The Navy has established some of the most stringent timelines for separation. Sailors must start vaccinations within five days in cases of denied exemptions, the Navy said last month.

Marines and sailors separated for refusing vaccinations will receive general discharges under honorable conditions, barring other circumstances, according to official guidance. That status forbids access to some veterans benefits such as the GI Bill, leaving lasting consequences for service members who decide to exit over the mandate.

Austin on Tuesday outlined updated vaccination regulations specifically for National Guard members, including the loss of pay and training opportunities and eventually their military careers if they do not comply.

Gov. Kevin Stitt argued that the defense secretary overstepped his constitutional authority by subjecting the National Guard to the mandate, which applies to active-duty military members.

Stitt had asked Austin to suspend the mandate for his state's National Guard and directed his new adjutant general to assure members that they would not be punished for not being vaccinated.

However, Austin rejected that request and said any National Guard members not vaccinated would be barred from federally funded drills and training required to maintain their Guard status.

Stitt said that although National Guard members are paid by the federal government, he remains their commander-in-chief under federal and state constitutional and statutory law unless the president orders their mobilization.

More than 6% of the Air National Guard and Reserve did not meet the deadline and could begin to face consequences if they don't get the mandated shots or receive exemptions, the Air Force said Friday.

All Air Guard members who report for their monthly drill this weekend will be allowed to participate and will be paid, and those without shots will have the opportunity to get vaccinated when they report to their base, said Air Force spokeswoman Ann Stefanek.

The Air Force said roughly 11,000 troops did not get vaccinated by Thursday's deadline. There are about 107,000 Air Guard members and 68,000 in the Reserve, and about 3,500 of the unvaccinated have received medical or administrative exemptions.

"Unvaccinated Air National Guard members will report to duty for the drill weekend as usual," Stefanek said. "Commanders will use this opportunity to educate their personnel on vaccination requirements and the consequences of not complying with the mandate."

Also, the chief of the National Guard has tested positive for covid-19 after a trip to visit Guard troops in Europe for Thanksgiving.

Gen. Dan Hokanson, who officials said is fully vaccinated, has been working remotely and isolating himself from with others all week, Guard spokesman Wayne Hall said Friday.

Information for this article was contributed by Alex Horton of The Washington Post; and by Lolita C. Baldor and additional staff members of The Associated Press.