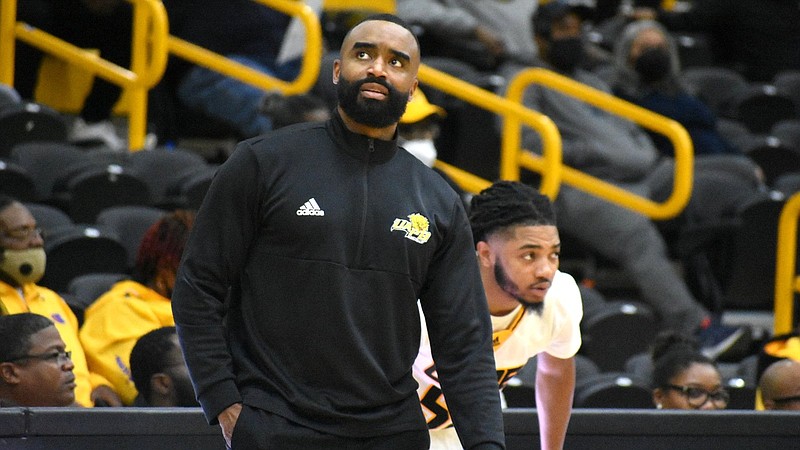 Video of the University of Arkansas at Pine Bluff players running line drills during a timeout early in the second half of a recent game has given the struggling men's basketball team more national attention than it possibly expected.

Michael Swain, an Iowa State University content creator for 247Sports.com, posted a video of the Golden Lions running baseline to baseline during a timeout with 18:20 left in the second half of Wednesday's game against the Cyclones in Ames, Iowa.

The 11-second video, sent to Swain by someone else at the game, captured UAPB players coming from Iowa State's end of the court to their own baseline and into their huddle, as first-year Coach Solomon Bozeman was reportedly displeased with his team's performance.

"No team enjoys running sprints at practice, but I can imagine it is even worse to run sprints during the game," Shanna McCarriston of CBSSports.com wrote.

Swain's video also caught the attention of USA Today reporter Andrew Joseph, who wrote he didn't think he had ever seen a Division I head coach make players do what the Lions did during that break.

"That just doesn't happen in college basketball and it was such a small-time look for Bozeman to have his team do that against a power-conference opponent," Joseph wrote. "He basically showed up his own team."

Bozeman declined comment on the video through a spokesperson. The Lions (1-8) will play defending NCAA champion and No. 4 Baylor University (7-0) at 4 p.m. today in Waco, Texas, with ESPN+ streaming the game.

Pine Bluff High School coach Billy Dixon saw the video and said he has no problem with Bozeman's move.

"As a coach, I've did it in the past," Dixon said. "It's an old-school-type move. It shows the discipline, the control -- the type of move. This new-age generation, the kids have to have bought into the program to be on a stage like that and respect the coach enough to give him a down-and-back.

"Here's the other thing about it: Players know when they're getting it done and not getting it done. That's just an attention-getter with the coach. I have no problem with what Coach Bozeman did."

Watson Chapel High School coach Marcus Adams said he's never made his team run sprints during or immediately after a game, but added Bozeman's decision was about instilling discipline.

"When it comes to discipline, I'm all about discipline," Adams said. "That's the thing that's going to make you win or lose a game. What Bozeman was trying to do was lay down his foundation with his coaching. You got people agreeing with it or not agreeing with it. We can go back to what [Michigan State University coach] Tom Izzo did, getting into a player's face and jacking up that player. What's the difference between that and what Bozeman did?"

UAPB had just come off a 75-70 home victory Monday over Arkansas Baptist College of the National Association of Intercollegiate Athletics and led Iowa State for nearly the first nine minutes of the game, but the Cyclones of the Big 12 Conference picked up their pace and took a 38-22 lead into halftime. That means the Lions were outscored 6-2 during the first 100 seconds of the second half.

The Lions will try to post a more competitive showing than last year's 99-42 loss at Baylor, which has beaten the University of Central Arkansas 92-47 on Nov. 17 and not played since topping Izzo's Spartans 75-58 in the Battle 4 Atlantis championship last Friday in the Bahamas. Baylor has won 13 straight, dating back to last March.