Bolding: Hats off to title winner 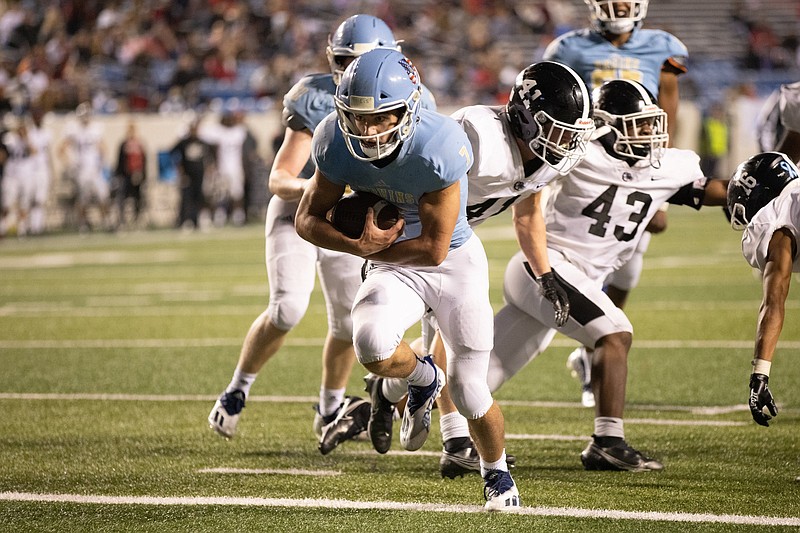 The task was monumental, but also an opportunity White Hall High School earned -- a chance to dethrone Pulaski Academy from atop Class 5A football in Arkansas.

But in Friday's championship tilt at Little Rock's War Memorial Stadium, PA (13-1) showed how it has won 10 state titles, including the last three.

"Hat's off to them," White Hall Coach Bobby Bolding said moments after a 51-19 loss to the Bruins. "That's what they do. They executed it. They took advantage of it, went and scored. They're a great football team.

"We were not just glad to be here. We wanted to win the football game. Our kids worked hard this week. They just whipped us. Hat's off to them and their coaches."

Bolding's Bulldogs (11-3) had something to prove after losing 63-28 at home to the Bruins on Oct. 8, that they could match them step for step.

White Hall did, for one series.

After PA scored in six plays on an 80-yard series, White Hall relied on running back Zaire Green and quarterback Mathew Martinez to cover 73 yards in six plays on its opening drive.

Green's 27-yard sprint to the PA 27 set up a 9-yard Martinez toss to Carsen Terrell. Tekaylin Walker followed that with an 18-yard touchdown haul, and an extra point pulled White Hall within 8-7.

Just as Walker helped White Hall's defense stuff PA standout Joe Himon on fourth-and-2, a golden opportunity for the Bulldogs to take charge went awry. Linebacker Joseph Osment forced Martinez to fumble the very next play, and the Bruins cashed in on the turnover with a field goal.

The Bruins successfully covered up a Bulldogs muff on the ensuing onside kick, one of six they attempted, and capitalized with another touchdown.

White Hall moved down to the PA 15 on its next drive before a third-down snap sailed over Martinez's head and the Bulldogs were called for a false start, taking them out of field goal position.

The Bulldogs' misfortune snowballed on a clear Friday night, and by halftime, they trailed 30-7.

In addition to their propensity for such trickery, the Bruins rarely punt -- they did not boot a single one Friday. They were solid on third- and fourth-down conversions (6 for 13 and 2 for 6, respectively).

"The fumble hurt," Bolding said. "We had a back go the wrong way one time on third down. That's uncustomary for us. We shotgun-snapped it over the head. We're not built to overcome that type of stuff. They were playing soft in the end, so we were able to complete passes and they weren't bringing a lot of people. They had a great game plan. They executed and they whipped us."

PA lived up to his offensive billing and racked up 654 total yards while holding White Hall to 291.

"They're good in all phases," Bolding said. "They bring the house. They're fearless on defense because they can score on offense. When you have an offense that can score like they can, they can gamble and take chances, and that's what they do. They're good at it."

The Bruins handed Anthony Lucas a championship seven months after he was named to replace Kevin Kelley -- who by Saturday had stepped down as Presbyterian College coach "for personal reasons," according to the South Carolina school.

"With the hopes of Coach Kelley staying here, we never changed anything," said Lucas, a former University of Arkansas wide receiver. "Every year, we start in January with our goal of winning another state championship. When Coach Kelley left in May and we were like, 'What are we going to do?' I thought it was going to be two other guys, [defensive coordinator] Madison Taylor and [defensive backs] Jason Wyatt, to step in. All I know is that God had another plan. They asked me to be the head coach, I took it with open arms, and today, there are a lot of firsts with our program."

Before this week, Dollarway's Lee Hardman was the only Black head coach to win an Arkansas Activities Association football title, according to football historian Walter Woodie. Now, there are two more: Lucas won his first title one night after Sirl Wright led Strong to the eight-man championship.