Hidden Gems: Critic wishes he could read these 10 books again for the first time 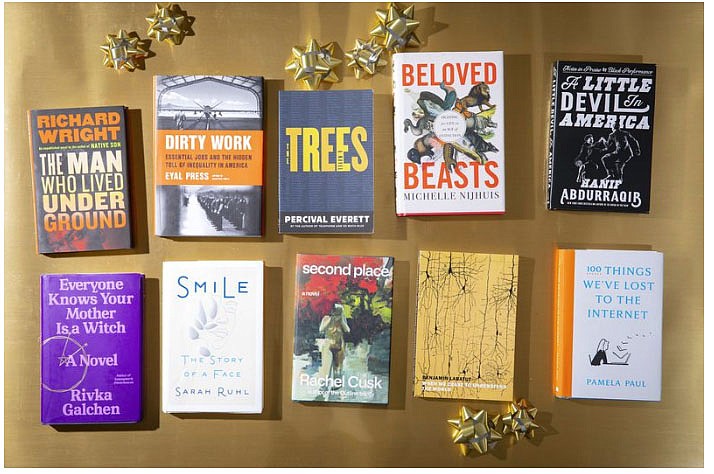 It’s been a great time to read widely and often, and considering the nearly 1 billion books sold in 2020 — and the probable record coming for 2021 as publishers saw double-digit sales leaps for much of the year — settling on 10 favorites for the year was tough for Chicago Tribune writer Christopher Borrelli. (Courtesy Photo/Chicago Tribune)

When I look over this list of the best books of 2021, I see what's not there, what didn't make the final cut and deserved the hosannas. Rebecca Solnit's discursive biography "Orwell's Roses." Clint Smith's sobering travelogue "How the Word is Passed." Matt Bell's climate-change epic "Appleseed." Even Seth Rogan's "Yearbook," a consistently thoughtful collection of essays on the strangeness of Hollywood, was not to be taken lightly. It's been a great time to read widely and often, and considering the nearly 1 billion books sold in 2020 -- and the probable record coming for 2021 as publishers saw double-digit sales leaps for much of the year -- settling on 10 favorites for the year was tough.

These, however, are the 10 I wish I could read again for the first time, in no particular order.

1. "A Little Devil in America: Notes in Praise of Black Performance" (Random House, $27): Columbus essayist and poet Hanif Abdurraqib -- who's had quite the year, named a National Book Award nominee and MacArthur "genius" in the same week -- hasn't written a bad book. His is a still-young career, but this is probably a high mark, a profound meditation on the Black artists and "mundane fight for individuality," as well as what it means to be a Black audience. On "Chappelle's Show": "It look white people laughing too loud and too long -- and laughing from the wrong place -- to build the show a coffin." On pianist Don Shirley (of "Green Book") and his lesser-known subversion of a University of Chicago juvenile delinquency study: "In a country still obsessed with Black people solving problems they didn't create, Don Shirley walked away, answering only to himself." Abdurraqib's lengthy essay on the importance of "Soul Train" is already classic.

2. "Second Place" (FSG, $25): The first novel from Rachel Cusk after her celebrated Outline Trilogy, and somewhat like those great books, here is another consideration of art and responsibility, if slightly less abstracted, though just as probing of its characters. A mother has a revelation in a gallery and proceeds to detonate her world, her marriage, her future. It's a novel of ideas, as they say. But the kind that has you leaning forward, recognizing the places where a person's moral certainty and self-image look fabricated.

3. "The Trees" (Graywolf, $16): Someday, inevitably, when Percival Everett is read by more people and not a painfully passed-over novelist whose work gets thrust into hands with a messianic promise of "Trust me," here's the book to tip the scales. Someone is killing the ancestors of the guys who murdered Chicago teenager Emmett Till back in 1955. To tell you more would deny you page after page of gasps -- and laughs. Everett is going for an unstable cocktail of broad parody, mystery and social justice, and the result feels thrillingly volatile, and brave, a swing at a new kind of novel on American violence.

4. "Everyone Knows Your Mother is a Witch" (FSG, $27): Not quite satire, not entirely historical fiction, but full of truth and chillingly hilarious in an age of QAnon conspiracies, anti-vaxxers and cancel culture. Rivka Galchen takes a page from Monty Python, Salem and the #MeToo movement to tell the story of real-life Katharina, a 16th century German widow with very important children (her oldest, Johannes Kepler, explained how planets move). She fights court accusations of witchcraft, for years. Galchen splinters the POV and gets at the absurdity ("The matter of how we came to know is simple -- we already knew") but more evocatively, the long reach of sexism and endless loops of groupthink.

5. "When We Cease to Understand the World" (New York Review Books, $18): At first, it reads like harrowing nuggets of history and hubris but soon, Benjamin Labatut's ingenious story of complicity and horrors of scientific achievement takes just enough liberty with the men behind the invention of chemical weapons and the concept of black holes (among other paradigm-shifting bits of alchemy) to upend our understanding of sanity and fiction. "Frankenstein" feels very close, and the age-old presumptions of unintended consequences get uncertain. So exquisitely unnerving, I guess it's ... horror?

6. "Beloved Beasts: Fighting for Life in an Age of Extinction" (Norton, $28): Science journalist Michelle Nijhuis' engrossing history of animal conservation avoids exactly the cheerleading that would render other books impotent. Here is a movement, she writes, "full of people who did the wrong things for the right reasons, and the right things for the wrong reasons." Characters arrive multifaceted, full of spirit and irony: The Smithsonian zoologist who, to ensure a sample of American bison, kills 10% of remaining bison; the tenacious bird watcher who buys a mountain to preserve raptors. Nijhuis is particularly good on the complexity, the colonialism and racism at the heart of many efforts, without missing the innovation, and the guts of amateurs. She is upfront on the future -- i.e., fairly pessimistic -- but determined about the urgency to continue, ends and means considered. Every page is a joy. (That World Wildlife Foundation panda? The WWF adopted it because it was cute. And because black and white is cheaper to print.)

7. "100 Things We've Lost to the Internet" (Crown, $27): Perhaps the only book on this list that might gain a little if read in dribs and drabs, tucked away beside your toilet. Pamela Paul, editor of the New York Times Book Review and a breezy, skeptical op-ed sort of voice in her own right, does not set out to transcend the plaintive loss of the title. Which is why this becomes so aching. Each chapter is a memory of a too-suddenly rare emotion (private humiliation), behavior (looking out the window) or artifact (bad photos), described with ennui and anger but enough clear-eyed memory to be a true incantation.

8. "Dirty Work: Essential Jobs and the Hidden Toll of Inequality in America" (FSG, $28): Journalist Eyal Press leans slightly into the pandemic "essential" workers of the title, albeit strategically, with reason: His aims are higher, the moral cost of jobs hidden away. He profiles drone pilots, prison guards, slaughterhouse workers. But he gains steam as whenever he pulls back on disturbing low-paying work to poke into culpability, how the harshest assessments often avoid the people in charge. Not just the usual bosses, but also, the investment bankers, the software engineers. Picture Upton Sinclair wading through the guts of our stockyards, detecting the stench in even our most sterile offices.

9. "Smile" (Simon & Schuster, $27): In the days after giving birth to twins, the left side of Sarah Ruhl's face began to droop and stiffen and she lost her ability to smile. She found herself in that small percentage of people who contract Bell's palsy and do not recover. This is not the setup for overcoming-the-odds kind of uplift. Instead, the Wilmette native and celebrated playwright uses her abruptly frozen face to circle the meaning of a smile, symmetry, disfigured villains, but also, a loss of faith, the misogynistic roots of bed rest -- and much more. Narrative loves an epiphany, she writes, but "the chronic resists plot ..."

10. "The Man Who Lived Underground" (Library of America, $23): Though Richard Wright's novella was well-known, the full text of his harrowing portrait of Chicago police abuse went unread for 80 years, so disturbing Harper editors they rejected it -- at a time when Wright was the bestselling Black author in America. The novel was shelved for decades, biding its time. What's here now is feverish, familiar, a tale of a Black man beaten by police who escapes under the city, at a cost: His foundation of reality frays. Sounds like "Invisible Man"? Frenemy Ralph Ellison sought inspiration from it, though Wright's complete novel is singular. And nothing less than the reestablishing of a major legacy.

Print Headline: Critic wishes he could read these 10 books again for the first time