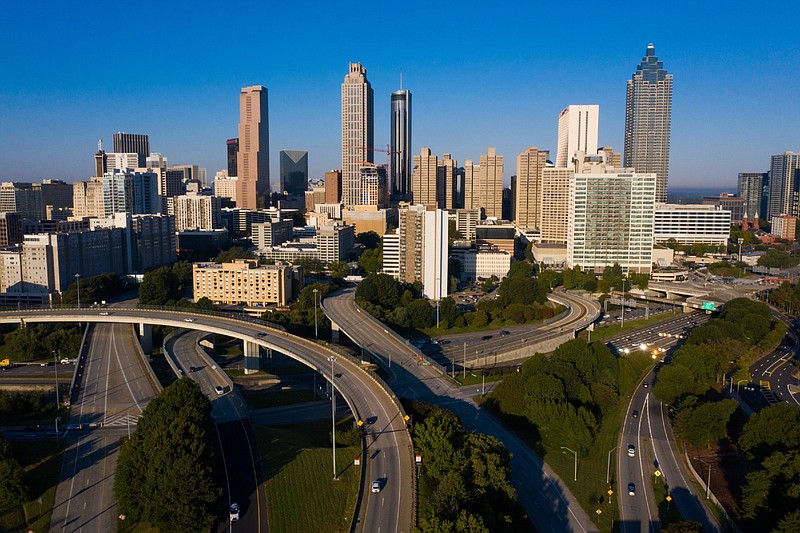 Vehicles travel along a highway in downtown Atlanta on Oct. 2, 2020. MUST CREDIT: Bloomberg photo by Dustin Chambers

Becky Gunn is the Federal Reserve's eyes and ears on the ground in Atlanta. She's constantly chatting up business leaders and consumers, prying intelligence out of them that is sent on to policymakers in Washington.

This puts Gunn in a unique position to witness firsthand the greatest inflation surge the U.S. has experienced in decades.

Atlanta, it turns out, is posting faster price increases than any other major metropolitan area in the country, a side effect of the economic boom it's undergoing.

The city's annual rate soared to 7.9% in October, well above the 6.2% nationwide average. Gunn says that her business contacts, big and small, in industries from retail to manufacturing and construction, are all seeing price gains across the board.

"Most are just saying 'Everything is increasing,'" said Gunn, a vice president at the Federal Reserve Bank of Atlanta. "Things are increasing multiple times."

In the October government report, there were the usual items hounding American consumers at the very top of the Atlanta region list -- rent and gasoline and vehicles -- but also recreation, clothing and school tuition.

It's an awkward position for Atlanta, which historically has lured workers with its mix of a robust economy and low cost of living. Although the city hasn't yet caught up to pricier metros in the Northeast and out West, it's rapidly losing its status as a cheaper alternative.

Like many states in the South, Georgia quickly lifted activity restrictions last year after initial shutdowns, while the West and East Coasts maintained strict measures for months to protect their population from covid-19. The diverging approach -- combined with people fleeing large cities like New York to relocate in the South -- has contributed to a pandemic-era divide among local economies.

Atlanta's old nickname "Hotlanta," which dates back decades, could now be used for some of its economic indicators. The city boasted an all-time low unemployment rate of 2.4% in October, among the lowest in the country.

Workers who've relocated from other markets during the pandemic are helping propel the economy, said C. David Moody, Jr., chief executive of C.D. Moody Construction in the Atlanta suburb of Lithonia. The firm has boosted its head count to 35 recently from 25, and expects to add 15 more in the next year as it builds data centers for technology companies.

"The Atlanta market is extremely good," Moody said. "With so many people working remotely these days, they have found Atlanta to be a great place to live."

The city is also especially attractive to members of minority groups, in part because its leadership has emphasized diversity and provided them with opportunities, said Moody, who is Black and a graduate of Morehouse College, a historically Black institution.

"The city has done an incredible job of working through the race issue," he said. Since the 1970s, leaders have "guaranteed everyone would have opportunity."

Raphael Bostic, the president of the Federal Reserve Bank of Atlanta, said in an interview last week that he and his fellow policymakers may need to speed up the removal of monetary stimulus to help quell the surge in inflation nationwide. Bostic said he wanted to see additional data before making a decision.

In Atlanta, whose population of 6.1 million makes it the ninth biggest metro area in the country, the elevated inflation rate partly stems from its lower starting point, said Mark Vitner, a senior economist at Wells Fargo. A quarterly cost-of-living index from the nonprofit Council for Community and Economic Research ranks Atlanta as 51st out of 263 midsize and large metro areas in the U.S.

Still, a mix of cash-rich investors and an influx of migrants from the North are squeezing out locals. Before the 2007-09 recession, Atlanta had one of America's biggest supplies of small and local homebuilders that were willing to construct houses at lower price points, said John O'Callaghan, chief executive of the nonprofit Atlanta Neighborhood Development Partnership, which helps finance affordable housing.

"Today, national builders have largely come in," O'Callaghan said. "They are developing product at $350,000 up to a million dollars or more, and really are not at the affordable end."

The city's also an epicenter of the single-family rental industry, where Wall Street-backed landlords such as My Community Homes buy and manage houses across the U.S. Sun Belt. Atlanta had the highest share of homes purchased by investors in the third quarter, 32%, among 40 metro areas analyzed by Redfin.

That's led to rent increases. Data from Apartment List show prices are up 24% in Atlanta in the past year, Wells Fargo's Vitner said in a note.

Clothes are also getting a lot more expensive.

Erik Gordon, one of the thousands of entrepreneurs who started an online business during the pandemic, has had to boost prices at his athletic gear business, the Sweat Company, to keep up with soaring shipping costs. Transport from the manufacturer in China or Pakistan to his distribution center in suburban Atlanta had equaled about half of the cost to produce his Eggplant-brand sweatpants and shirt.

Nonstop price increases for air and ocean freight forced him to raise the price of a pair of sweatpants to $49.99 from $35.99, although he also did some upgrades to materials.

"It costs me more money to purchase shipping for the pants than to make the pants," Gordon said.