Not a cakewalk: Razorbacks finally put away Trojans 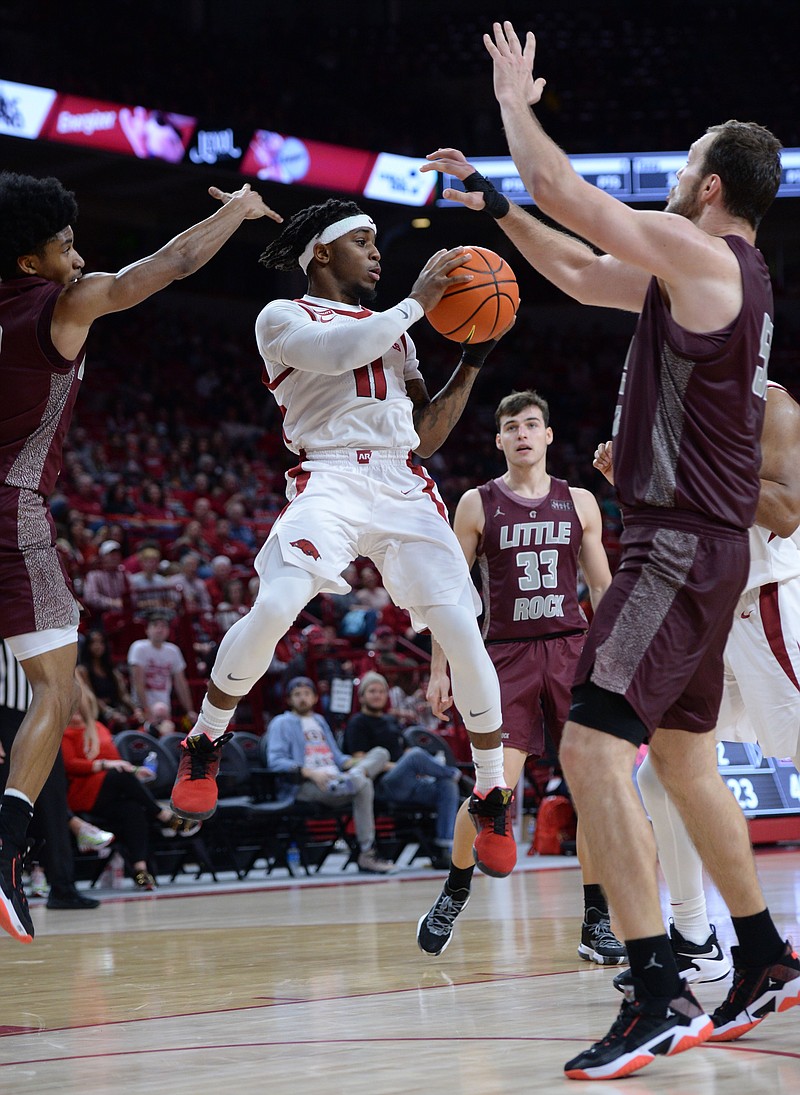 Arkansas guard Chris Lykes (11) passes out of the lane Saturday as he is pressured by Little Rock guard D.J. Smith, left, and center Admir Besovic, right, during the second half of the Razorbacks' 93-78 win in Bud Walton Arena in Fayetteville. - Photo by Andy Shupe of NWA Democrat-Gazette

FAYETTEVILLE -- Coach Darrell Walker and his University of Arkansas at Little Rock team made it tough on his alma mater.

The No. 10 Arkansas Razorbacks didn't put away UALR until the final minutes to pull away for a 93-78 victory on Saturday in Walton Arena in the teams' first regular-season meeting.

UALR's effort was especially impressive considering the Trojans (4-5) dressed out only eight players because of injuries and were without Nikola Maric and DeAntonio Gordon, their No. 1 and No. 3 scorers.

"It's kind of what we expected as far as them playing really hard," University of Arkansas Coach Eric Musselman said. "They executed really well.

"Sometimes when you know you're going to play, and you have a short rotation, good things happen. I thought Coach Walker did a great job with his rotation."

Walker was an All-American guard for the Razorbacks and helped them to three consecutive NCAA appearances from 1981-83.

"I thought the effort was really good," Walker said. "I had told my team watching film that if we didn't turn the ball over a lot, and we could kind of stay within the rebound margin, and make some shots we would have a chance to be in the basketball game, and that's what happened."

"Coach Muss told us it was an in-state game, so I knew they were going to come out swinging," said senior forward Au'Diese Toney, who led Arkansas with 18 points and eight rebounds. "They came out playing hard.

"They did pretty good for them lacking players for injuries. They held their own really well and came in here and showed us up for a minute."

Arkansas sophomore guard Davonte "Devo" Davis had 16 points, a career-high 7 assists and 4 rebounds without a turnover, but was limited to 28 points because he had four fouls. He hit 8 of 11 shots.

"This morning at shoot-around, I thought Devo was as dialed in as I've been around him," Musselman said. "I thought he played on a different level.

"The only unfortunate thing was he only got to play 28 minutes because of fouls. A lot guys would say 28 minutes is a lot, but I would have played him 40, quite frankly, if he wouldn't have been in foul trouble."

Arkansas senior guard JD Notae had 18 points, including nine consecutive -- with two layups after making steals and a three-pointer -- to push the Razorbacks' lead to 85-73.

What Musselman didn't like about Notae's game was that he had one rebound and three turnovers.

"He's got to play much better than he did other than that [late] stretch," Musselman said. "He did play well for a short stretch. I don't know about the other 25 minutes he was out there. I think he's capable of more."

"Marko Lukic, let me tell you something," Walker said laughing. "He's about seven games too late making some shots .

"No, I was happy for him. It's been awhile since he's made some shots and I knew he was overdue for a good basketball game. He picked the right time to make some shots."

Chris Lykes scored 14 points off the bench for Arkansas, Jaylin Williams had 9 points, 7 rebounds and 4 assists and Umude had 9 points.

"They've got some really good basketball players,"Walker said. "There's a reason Muss' record is what it is, man. He does an unbelievable job. They are physical and they are tough."

The Razorbacks finished with 20 assists, including 14 in the first half on 21 baskets when they took a 49-34 lead.

"I thought offensively in the first half, we moved the ball," Musselman said. "We shared it. I mean, we had some beautiful possessions."

Walker said the Trojans' injured players include what would be his starting lineup if they were healthy.

"Nobody needs to feel sorry for us because if it was the other way around I would try to beat the hell out of Muss," Walker said. "Trust me.

Print Headline: Not a cakewalk