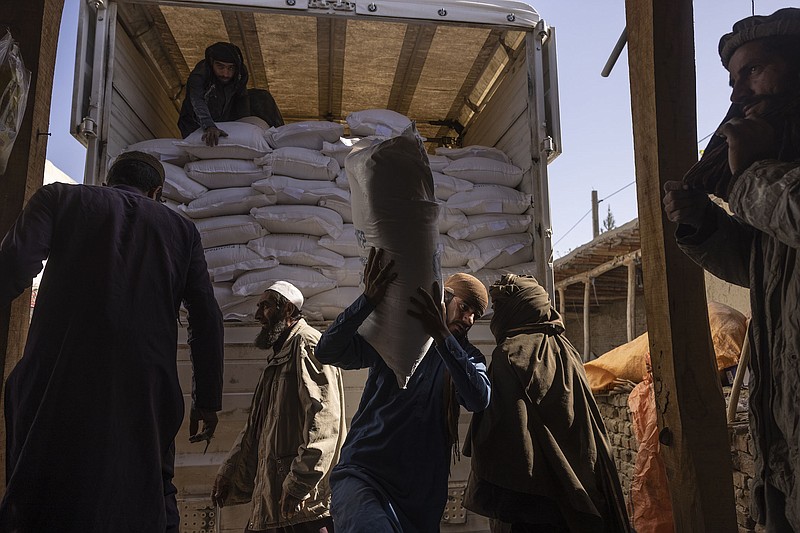 Laborers unload sacks of flour from a World Food Program convoy that traveled from Kabul to Afghanistan’s Tagab district, Oct. 27, 2021. An estimated 22.8 million people — more than half the population of Afghanistan — are expected to face potentially life-threatening food insecurity this winter. Many are already on the brink of catastrophe. (Victor J. Blue/The New York Times)

SHAH WALI KOT, Afghanistan -- One by one, women poured into the mud brick clinic, the frames of famished children peeking out beneath the folds of their pale gray, blue and pink burqas.

Many had walked for more than an hour across this drab stretch of southern Afghanistan, where parched earth meets a washed-out sky, desperate for medicine to pump life back into their children's shrunken veins. For months, their once-daily meals had grown more sparse as harvests failed, wells ran dry and credit for flour from shopkeepers ran out.

Now, as the crisp air grew colder, reality was setting in: Their children might not survive the winter.

"I'm very afraid this winter will be even worse than we can imagine," said Laltak, 40, who like many women in rural Afghanistan goes by only one name.

Nearly four months since the Taliban seized power, Afghanistan is on the brink of a mass starvation that aid groups say threatens to kill 1 million children this winter -- a toll that would dwarf the total number of Afghan civilians estimated to have been killed as a direct result of the war over the past 20 years.

While Afghanistan has suffered from malnutrition for decades, the country's hunger crisis has drastically worsened in recent months. This winter, an estimated 22.8 million people -- more than half the population -- are expected to face potentially life-threatening levels of food insecurity, according to an analysis by the U.N. World Food Program and Food and Agriculture Organization. Of those, 8.7 million people are nearing famine -- the worst stage of a food crisis.

Such widespread hunger is the most devastating sign of the economic crash that has crippled Afghanistan since the Taliban seized power. Practically overnight, billions of dollars in foreign aid that propped up the previous Western-backed government vanished, and U.S. sanctions on the Taliban isolated the country from the global financial system, paralyzing Afghan banks and impeding relief work by humanitarian organizations.

Across the country, millions of Afghans -- from day laborers to doctors and teachers -- have gone months without steady or any incomes. The prices of food and other basic goods have soared beyond the reach of many families. Emaciated children and anemic mothers have flooded into the malnutrition wards of hospitals, with many of those facilities bereft of medical supplies that donor aid once provided.

Compounding its economic woes, the country is confronting one of the worst droughts in decades, which has withered fields, starved farm animals and dried irrigation channels.

Afghanistan's wheat harvest is expected to be as much as 25% below average this year, according to the United Nations. In rural areas -- where roughly 70% of the population lives -- many farmers have given up cultivating their land.

Now, as freezing winter weather sets in, the crisis is potentially damning to the new Taliban government and to the United States, which is facing mounting pressure to ease the economic restrictions that are worsening the crisis.

"We need to separate the politics from the humanitarian imperative," said Mary-Ellen McGroarty, the World Food Program's country director for Afghanistan. "The millions of women, of children, of men in the current crisis in Afghanistan are innocent people who are being condemned to a winter of absolute desperation and potentially death."

In Shah Wali Kot, a barren district in Kandahar province, the drought and economic crash have converged in a perfect storm.

For decades, small farmers survived the winters on stored wheat from their summer harvest and the income from selling onions in the market. But this year yielded barely enough to sustain families during the fall months. Without food to last the winter, some people migrated to cities hoping to find work or to other districts to lean on the help of relatives.

Inside one of the two mud huts of the clinic, which is run by the Afghan Red Crescent and supported by the International Federation of Red Cross and Red Crescent Societies, Laltak clutched her granddaughter's gaunt frame as if steeling herself for the hardships she knew this winter would bring.

Her family has no wheat left, no wood to make fires for heat, no money to buy food. They have exhausted the support of nearby relatives who cannot even feed their own families.

"Nothing -- we have nothing," Laltak said in an interview at the end of October.

She and most of the mothers interviewed did not own cellphones or have phone service in their villages, so The New York Times could not follow up with them on the health of their children.

The humanitarian catastrophe unfolding in Afghanistan comes as hunger has steadily risen around the world in recent years, driven by the coronavirus pandemic, conflict and climate-related shocks.

"It was never this bad," said Sifatullah Sifat, the head doctor at the Shamsul Haq clinic on the outskirts of Kandahar city, where malnutrition cases have doubled in recent months. "Donors are shipping in medicine, but it's still not enough."

By 10 a.m. each day, a throng of mothers carrying skeletal children masses in the hallway of the malnutrition unit.

Inside an examination room in October, Zarmina, 20, cradled her 18-month-old son while her 3-year-old daughter stood behind her, clutching her blue burqa. Since the Taliban seized power and her husband's work as a day laborer dried up, her family has survived on mostly bread and tea -- meals that left her children's stomachs gnawing with hunger.

"They are crying to have food. I wish I could bring them something, but we have nothing," said Zarmina, who is six months pregnant and severely anemic.

Zarmina's son had grown frail after weeks of diarrhea. He stared blankly at the wall as a nurse wrapped a color-coded measuring band used to diagnose malnutrition around his rail-thin arm, stopping at the color red: Severe malnourishment.

As the nurse told Zarmina that he needed to go to the hospital for treatment, another mother barged into the room and collapsed on the floor, demanding help for her infant daughter.

"It's been almost one week. I can't get medicine for her," she pleaded.

The nurse begged her to wait; her daughter's malnutrition was considered only moderate.

Since the Taliban seized power, the United States and other Western donors have grappled with delicate questions over how to avert a humanitarian catastrophe in Afghanistan without granting the new regime legitimacy by removing sanctions or putting money directly into the Taliban's hands.

"We believe that it's essential that we maintain our sanctions against the Taliban but at the same time find ways for legitimate humanitarian assistance to get to the Afghan people. That's exactly what we're doing," the deputy U.S. Treasury secretary, Wally Adeyemo, told the Senate Banking Committee in October.

But as the humanitarian situation has worsened, aid organizations have called on the United States to move more quickly.

U.S. officials showed some flexibility around loosening the economic chokehold on Afghanistan last week when the World Bank's board -- which includes the United States -- moved to free up $280 million in frozen donor funding for the World Food Program and UNICEF. Still, the sum is just a portion of the $1.5 billion frozen by the World Bank amid pressure from the U.S. Treasury Department after the Taliban took control.

How those released funds would be transferred into Afghanistan remains unclear. Despite letters that the Treasury Department recently issued to foreign banks assuring them that they can process humanitarian transactions to Afghanistan, many financial institutions remain fearful of exposure to U.S. sanctions.

The Taliban government has repeatedly called on the Biden administration to ease economic restrictions and has worked with international organizations to deliver some assistance.

But already, millions of Afghans have been pushed over the edge.

At Mirwais Regional Hospital in Kandahar this fall, children suffering from malnutrition and disease crowded onto the pediatric ward's worn metal beds. In the intensive care unit, an eerie silence filled the large room as children too weak to cry visibly wasted away, their breath labored and skin sagging off protruding bones.

Like many other mothers and grandmothers in the ward, they had come from western Kandahar, where over the past two years irrigation channels have run dry, and more recently, pantries emptied. Amina started to shrivel, her skin so drained of life-sustaining vitamins that patches peeled away.

On a bed nearby, Madina, 2, let out a soft wail as her grandmother, Harzato, 50, readjusted her sweater. Harzato had taken the girl to the local pharmacist three times begging for medicine until he told her there was nothing more he could do: Only a doctor could save the child.

"We were so far from the hospital, I was worried and depressed," Harzato said. "I thought she might not make it." 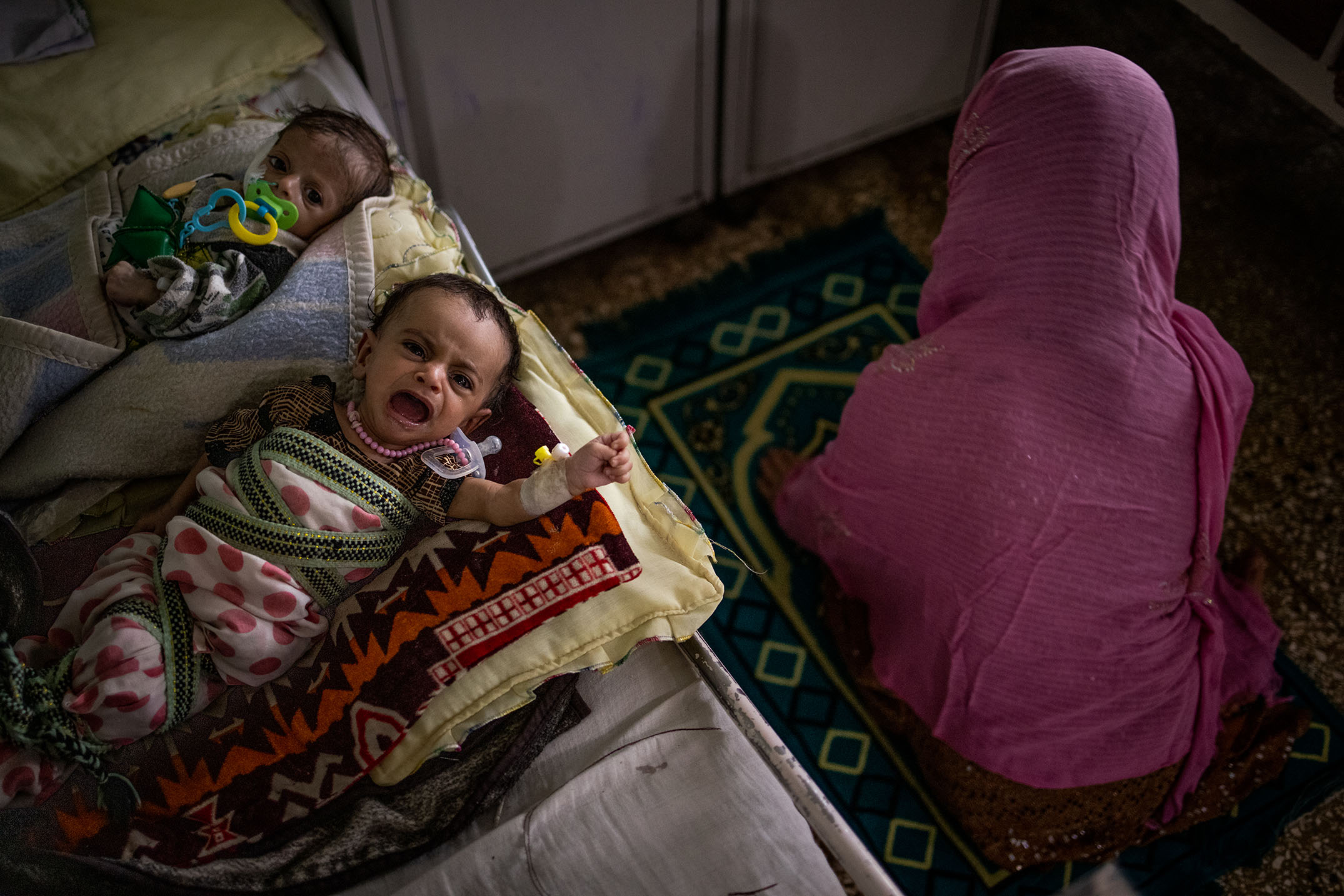 A woman prays by children in the malnutrition ward at the Mirwais Regional Hospital in Kandahar, Afghanistan, Oct. 21, 2021. An estimated 22.8 million people — more than half the population of Afghanistan — are expected to face potentially life-threatening food insecurity this winter. Many are already on the brink of catastrophe. (Jim Huylebroek/The New York Times)