OPINION | ON BOOKS: 'Tall Men' a memoir of Goliath 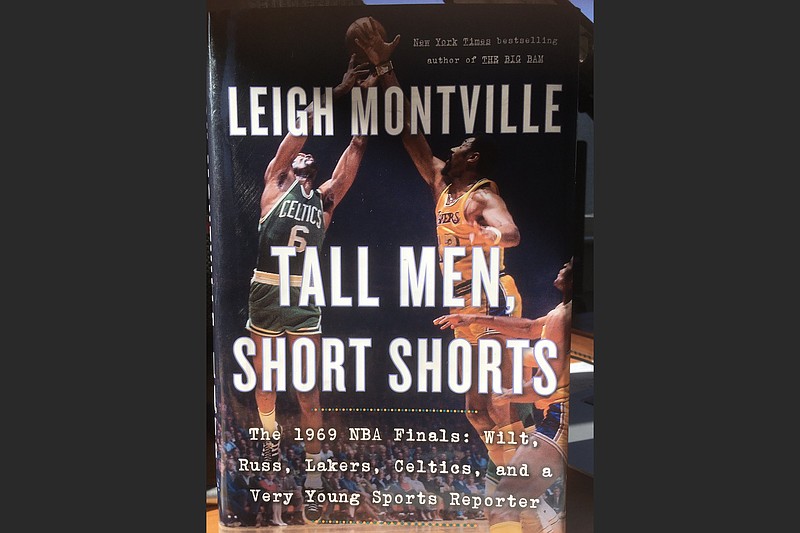 Wilt Chamberlain was a Richard Nixon man in 1968.

In that instance his team won, which flies against the conventional wisdom that defines Chamberlain as the ultimate loser. But a loser by whose standards? Chamberlain had his Bentley, his house in the Hollywood Hills, and a famously hedonist lifestyle, even if you think some of his claims exaggerated.

He wasn't Bill Russell, so driven to win that he threw up in the locker room before almost every game. No basketball game was worth that.

Early on in his professional basketball career Chamberlain took to making self-serving comparisons of himself to Goliath. "Nobody roots for Goliath," he'd shrug, whenever he was booed or castigated for being something less than an ideal team player.

And he was right. It was hard to look at Chamberlain — 7-foot-1 and 275 pounds and gifted with quick-twitch muscle fiber and a certain delicacy of touch with a basketball (he scored more often with feathery fine rolls than brutal dunks) — and see anything but an athletic bully with all the advantages. He was like a one-man New York Yankees or Alabama Crimson Tide.

I was a Los Angeles Lakers fan in 1968 because I lived in a part of Southern California where every Lakers game was televised. The road games were aired live, and KTLA would broadcast tape-delay home games after the late news. (They also did this for the UCLA Bruins; I watched a few undefeated seasons on the little black and white portable in my bedroom.)

Chamberlain came to my team in the summer of 1968 when the Los Angeles Lakers sent Darrall Imhoff, Archie Clark, Jerry Chambers and a check for an undisclosed but presumably hefty amount to the Philadelphia 76ers in exchange for him.

I didn't like the trade — in part because I was a fan of Clark (born in Conway), an up-and-coming star who had scored nearly 20 points a game alongside Jerry West in the Lakers' backcourt — but mostly because, like almost everybody else who followed basketball in those days, I feared and hated Chamberlain.

My 9-year-old self believed in platitudes; it was better to fail nobly than to buy an advantage. Imhoff was not among the league's elite centers, but he was a solid rebounder who gave good effort. (Today he's best remembered as one of the guys who tried to guard Chamberlain when he scored 100 points against the New York Knicks in 1962.)

What the Lakers saw in Chamberlain was the missing piece to what, on paper at least, is in the running for the greatest team of all-time. In addition to the literary iconic West, whose silhouette was incorporated into the NBA logo, the team had elegant Elgin Baylor, a remarkably fluid scorer with a high court IQ and the ability to play much bigger than his listed 6-foot-5 height. The Lakers didn't need Goliath.

But Chamberlain had something none of the Lakers did: an NBA championship. Five times previously the Lakers had faced the Boston Celtics, led by their big man Bill Russell, in the NBA finals. And six times the Celtics had defeated them.

But as a member of the Philadelphia 76ers, Chamberlain had beaten the Celtics, a team that had won eight consecutive titles and nine out of the last 10 NBA championships four games to one in the Eastern Conference finals. They'd gone on to win the title over the San Francisco Warriors.

Nobody had beaten the Celtics and Russell but Chamberlain.

Leigh Montville is one of the last best sportswriters left, a relic from a time when the writing was worthy of attention and consideration, before the celebritization of the trade. He aligned himself with the New Journalism emergent in the '60s, and traces of the whiz-bang style remain some 52 years on — often, but not always, he refers to himself as "The Bright Young Man (TBYM)," a conceit some might find a little precious.

I don't think it needs defending, but if it did I might say the device not only evokes the era but takes notice of the writer's knowledge of his younger self's callowness and unearned confidence, and that it's appropriate for his book "Tall Men, Short Shorts: The 1969 NBA Finals: Wilt, Russ, Lakers, Celtics, and a Very Young Sports Reporter" (Doubleday), the reworked and re-reported diary of a kid covering events that might not have revealed themselves as remarkable until years later.

As a very young man he covered the inevitable meeting of the Lakers and the Celtics in the 1969 NBA finals; his book is both a memoir of an era that might seem impossible to contemporary NBA fans and a fascinating recounting of the series itself.

Since Montville was a 25-year-old beat writer covering the Celtics for the Boston Evening Globe at the time, it might be skewed a little to the (spoiler alert) ultimately victorious Celtics, who managed to vanquish Goliath in seven games. But he also understands that the better story is often in the losers' locker room, and he identifies those Lakers (my Lakers) as the "losingest" locker room ever. Eagle Scout Jerry West gets his due.

"He was everything the good folk of Los Angeles wanted, a basketball version of Sandy Koufax, Cary Grant in sneakers, almost elegant in the way he played the game," Montville writes.

This isn't a book about the 1969 NBA Finals series, but a book about what it was like to cover that series as a young and ambitious writer, and Montville includes game recap stories and columns from the series written by him and others (including Celtic player-coach Russell) to provide a kind of baseline for his flights of memory.

Newspaper stories, constrained as they are by deadline pressures, space constraints and the sometimes capricious conventions of journalistic style, don't always hold up for more than five decades, but here they lend the text some ballast, allowing TBYM to remember Celtics backup guard's Emmette Bryant's fashion sense, which ran to velour suits and Sherlock Holmes hats.

It was a strange and wondrous time; the Lakers, with Goliath at center, were heavy favorites over the aging Celtics, a blue-collar team lead by overachieving Russell — a complicated and fraught figure who decided, Montville writes, "early in his career, that he played for the Celtics. He played for his teammates. He played for his coach. He did not play for the city of Boston."

Russell was a political activist. He was a character guy. The ultimate team player.

Chamberlain was the best basketball player ever. Far from the greatest — whatever that means — just the biggest, strongest and most skilled. And it is an enduring human mystery as to why that was never enough.