U.S. weather warm, cold in all the wrong places 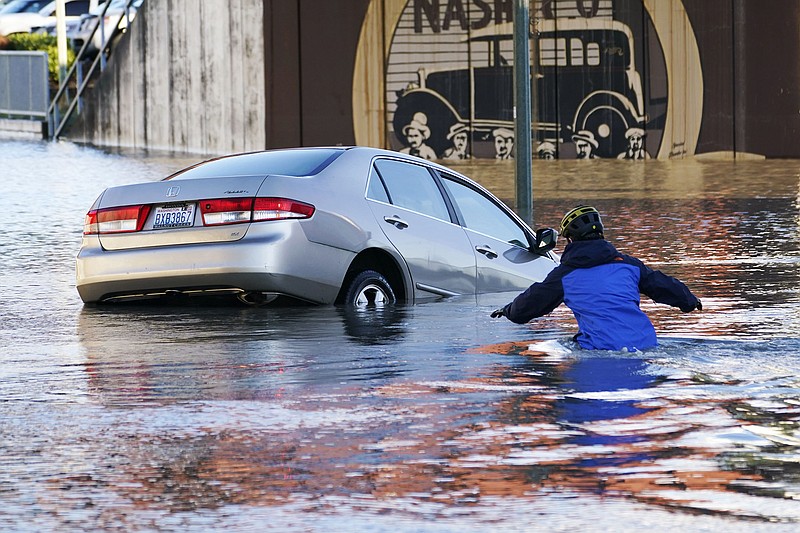 FILE - Kenneth Warner races into the water to help rescue the driver of a car that went into the flooded Nooksack River, Tuesday, Nov. 16, 2021, in Ferndale, Wash. Winter has started out weird in the United States. It's been flip flop weather in much of the country with the Pacific Northwest getting record rainfall and Denver and the Rockies still haven't seen their first significant snowfall of the season. (AP Photo/Elaine Thompson, File)

HONOLULU -- America's winter wonderland is starting out this season as anything but traditional.

The calendar says December but for much of the country temperatures call for sandals. Umbrellas, if not arks, are needed in the Pacific Northwest, while in the Rockies snow shovels are gathering cobwebs.

In Hawaii, the National Weather Service issued a blizzard warning overnight Saturday for the mountains on Big Island, saying wind gusts stronger than 100 mph and 12 inches or more of snow were possible.

The warning in effect through this morning on the island said "travel should be restricted to emergencies only," and those who must travel should have winter survival kits.

Blizzard warnings in Hawaii are rare, though not unheard of. The Big Island has mountain peaks that reach nearly 14,000 feet. CNN reported that the last blizzard warning issued by the National Weather Service in Hawaii was more than 3½ years ago.

The threat of snow in Hawaii comes as places in the Rocky Mountains, more used to white wintry weather, are close to breaking records on the number of days without snow. Denver's high temperature Wednesday was 73 degrees, tying the record set in 1973.

Meteorologists attribute the latest batch of record-shattering weather extremes to a stuck jet stream and the effects of a La Nina weather pattern from cooling waters in the equatorial Pacific.

It's still fall astronomically, but winter started Wednesday for meteorologists.

Parts of Canada and Montana have seen their highest December records in recorded history. On Friday, parts of South Carolina and Georgia also hit record highs.

The Olympic and Cascade mountains got hit even harder, with more than 50 inches of rain in three months, according to the National Weather Service. Forks, Wash., received more rain in 90 days than Las Vegas gets over 13 years.

Meantime, Colorado is devoid of snow. Before this year, the latest first measurable snowfall on record in Denver was Nov. 21, way back in 1934.

There's a slight possibility of snow Monday night, according to the weather service. With no snow since April 22, this is the third-longest stretch the city has gone without it.

One big factor is the jet stream -- the river of air that moves weather from west to east on a roller-coaster-like path. It has been stuck.

That means low pressure on one part of the stream is taking rain to the Pacific Northwest, while high pressure hovering over about two-thirds of the nation produces dry and warmer weather, said Brian Hurley, a senior meteorologist at the weather service's Weather Prediction Center in College Park, Md.

If the jet stream moves more or bends differently, rain and other extreme weather won't be as concentrated, Hurley said. This is a typical weather pattern with a natural La Nina weather oscillation, he said.

The flip side of El Nino, a La Nina is a cooling of parts of the central Pacific Ocean that changes weather patterns across the globe. La Ninas tend to take more rain to the Pacific Northwest and make the South drier and warmer.

These bouts of extreme weather are happening more frequently as the world warms, said meteorologist Jeff Masters, founder of Weather Underground, who now works at Yale Climate Connections. But scientists haven't done the required study to attribute these events to human-caused climate change.

Still, "there's a lot of angst about the lack of snow," he said. "It puts you in a psychic quandary. You enjoy the warm weather while keeping in mind it's not good for Earth to be warming."