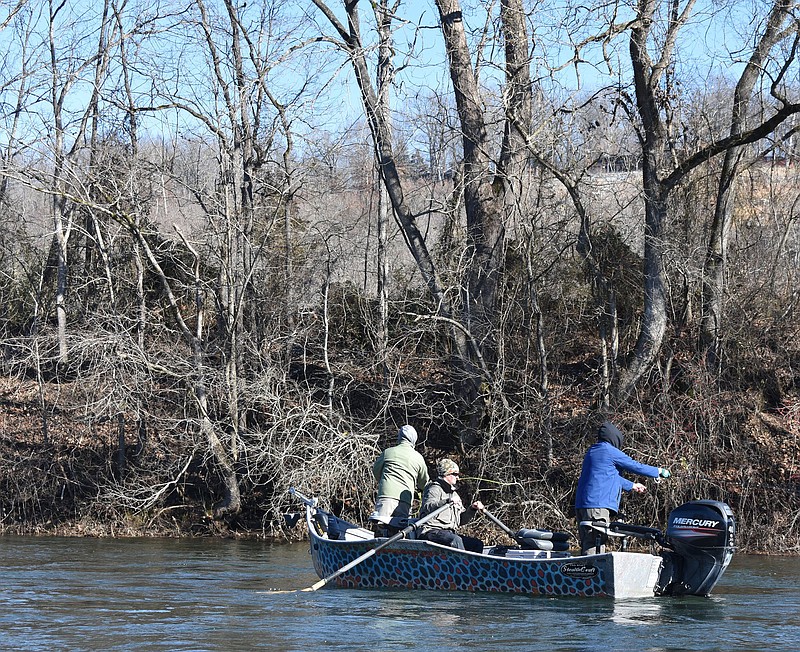 Even though we are neck deep in hunting seasons, late fall and early winter are also prime times to enjoy fly fishing on Arkansas's streams.

It might not last much longer, but the warm, sunny weather we enjoyed in October and November makes wading fishing in a trout or bass stream delightful.

The fishing is surprisingly good, too. Trout, which live in controlled environments where the water is always in the 40- to 50-degree range, are impervious to cold. They are actually more likely to be put off their feed in the summertime, when rising water temperatures and low dissolved oxygen levels make them lethargic. At least, that's how it used to be. That problem has abated over the last decade since the Army Corps of Engineers implemented minimum flow on the White and North Fork rivers.

Minimum flow provides a constant supply of cold water in the rivers during the summer, when low, hot, anoxic water formerly drove trout to hunker in the deepest holes and often caused significant numbers of trout to die. Those days are gone. Trout in the White River below Bull Shoals Dam and in the North Fork River below Norfork Dam are in superb condition.

We think of stream fishing for smallmouth bass as a summertime activity, but the quality of fishing is surprisingly good in the winter.

The best thing about fishing in the winter is that you have the water to yourself. All but the most avid anglers have packed it in until spring, allowing you to spend an excellent day of fishing in solitude.

Steve Dally, of Dally's Ozark Fly Fisher in Cotter, recently noted in his weekly newsletter that hydropower generation at Bull Shoals Dam has been minimal, resulting in long periods of low, wadable water. That's a fly fisher's dream at big trout hotspots like Wildcat Shoals, Rim Shoal and Redbud Shoal. If you have a boat, you can also access Shoestring Shoal and many other places that don't have direct access.

Insects hatch in the middle of a sunny day. If you're in the right kind of water, that's a good time to fish a dry fly. Trout will sip insects off the surface, but it's important to present a facsimile of the same insect that trout are eating. They will ignore anything else.

Midges commonly hatch in the winter. Almost any color will work as long as it's the color of the midge that is hatching. Keep a selection of sizes and colors in your box. Black, blue, white, red, olive and brown are common colors. Look for them to hatch in the warmest part of the day, between 10 a.m. and 3 p.m.

Sizes 18-26 are common. It is important to drift them in the "film," the thin surface layer between air and the water column.

Nymphs are the most productive flies in the winter, and trout are not as picky about nymph authenticity as they are toward dry flies. Nymphs resemble the larval stages of mayflies, stoneflies, caddis flies and other insects that live in the rivers. Fish them on the bottom where trout scavenge for morsels. Big brown trout prefer to feed on the bottom. You will get a lot of strikes on the drift as your nymph bounces along the bottom, but also be alert for the strikes you will get on the rise as you haul back your rod to cast. This lifts your fly toward the surface, mimicking an emerging insect that often triggers a trout to strike.

Blue wing olive, wooly buggers, scuds and sowbugs in sizes 12-24 are consistent producers. Olive, brown, red, and white are good colors. A small bit of silver tinsel will produce a bit of flash that will catch a trout's attention.

In high water, fly fishermen in drift boats often throw large streamers with heavy fly rods. It is a low-volume play, but it's a good way to catch big brown trout feeding along the banks.

Smallmouth bass and Kentucky bass are active year round in Arkansas streams, especially those in the Ouachita Mountains and in the vicinity of the Arkansas River Valley. Specifically, the Caddo and Ouachita Rivers are outstanding places to enjoy a quality fly fishing experience.

Contrary to popular belief, catch rates can be very high, but winter is also a great time to catch big bass, especially smallmouths.

Accessing the most productive water requires a canoe. Beach it and thoroughly fish the tails and heads of riffles and rapids. Big smallmouths prowl these areas and will take crawdad imitators and leech imitators on the bottom.

In the winter, the river is quiet. The homes along the bank are unoccupied, so there is little to none of the ambient noise and activity that is endemic to fishing in warm weather. Canada geese often fly over almost at head level, sometimes landing around you. Bald eagles soar overhead, sometimes swooping down to grab a fish within casting distance. Fly fishing seems to open a portal to the soul, enabling you to achieve a union of mind, body and spirit that is not possible in any other medium.