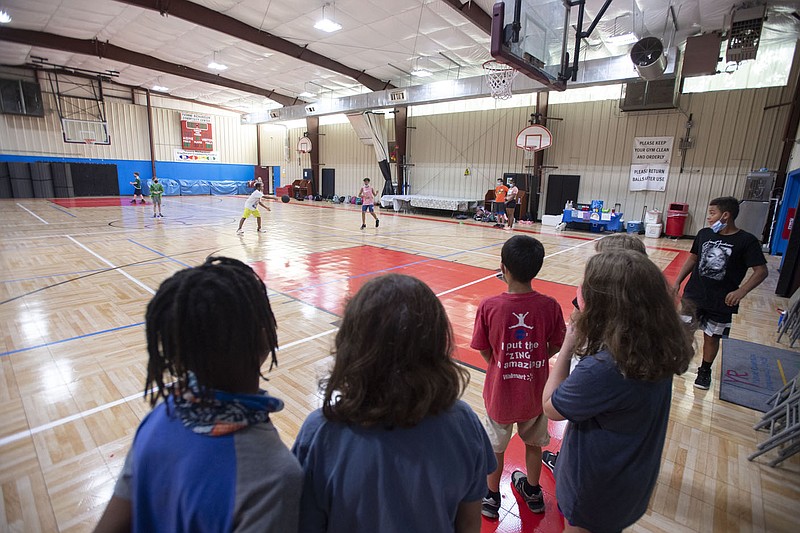 Children play July 14, 2021, at the Yvonne Richardson Community Center in Fayetteville. The city has plans to expand the center, and members of the center's nonprofit board have asked for additional staffing. (File photo/NWA Democrat-Gazette/J.T. Wampler)

To learn more about the center, go to: http://friendsofyrcc.org or http://bit.ly/fayYRCC

FAYETTEVILLE -- The nonprofit board for the Yvonne Richardson Community Center is asking the City Council to put more money in the budget to hire paid staff, rather than rely so heavily on volunteers.

Quinn Childress, president of the board for Friends of YRCC, made the case to the council Nov. 30 when it was talking about next year's budget. He asked for $45,000 to cover the cost of extra paid staff to oversee programming. The board, he said, isn't confident volunteers can reliably carry out programs intended to help grow and develop children of largely lower-income or minority families.

"Volunteers -- they may come or they may not," Childress said. "This has been an issue for the last 10 years."

The 10,000-square-foot center features an indoor basketball court, computer laboratory, conference room and an outdoor playground and garden. It's on Rock Street near the Willow Heights public housing complex.

The center offers an after-school program, summer and spring break camps, physical education for home-schooled children and kid-friendly gardening. Adults can partake in pickleball and an open gym at certain times with basketballs provided. Space also can be rented for gatherings.

The center provides stability for children who otherwise may not have structure in their lives, Childress said. He told the council personal stories of how he struggled as a youth, but the center gave him direction to steer away from behavior such as stealing.

The center will have $1 million next year to put toward an expansion. The money came from a parks bond issue voters approved in 2019. The money can only be used for capital costs, not operations or personnel.

The city is gathering public input on what to do with the expansion. Ideas floated before the resident-led Parks and Recreation Advisory Board in October included a teaching kitchen, indoor spaces mimicking the outdoors, architecture that encourages recreation such as a climbing wall, exercise spaces and outdoor pickleball courts.

Part-time positions are permanent, year-round positions with employees working fewer than 40 hours a week. Seasonal positions also are permanent but have an employee working a certain portion of the year only, such as during summer camps. Temporary positions are usually hired through a contractor for workers to accomplish a specific task, such as overseeing spaces rented by the public.

Childress said the center will need more paid staff to operate the expanded facility. However, the need for extra staff already exists, he said. The center bought a van this year with donations to take children on field trips, but often doesn't have anyone to drive it, he gave as an example.

City staff gave the council a presentation on the center's history, funding, programming and staffing during an agenda-setting session Tuesday. The center opened in 1996 under the city's Community Resources Division, with revenue largely coming from the federal Community Development Block Grant program. A nonprofit board formed with the intent of running the center, but that never happened, said Alison Jumper, the city's director of parks, natural resources and cultural affairs.

The city on average has spent about $176,800 yearly on the center since 2012. Donations have accounted for about $25,800 yearly during the same time period.

In 2019, the center had 371 volunteers or interns that provided 4,182 hours of service, according to Josh Lainfiesta, center director. Individuals or groups of volunteers help with events and to facilitate programs, he said.

Lainfiesta said he would never say no to more staffing. Having paid staff on hand helps support programming and makes the volunteer experience better, he said.

The expansion is going to change the center, and staff wants to work closely with the nonprofit board and the public on what it will look like, Lainfiesta said. An online survey for public input recently closed, but meetings will be held in the coming year to influence the expansion's design, he said.

Jumper said the center, like many park programs, relies on volunteer work.

"We have a volunteer coordinator who helps us execute invasive species removals. We have coaches," she said. "The department, in general, just relies heavily on volunteers to execute our programming."

Chief of Staff Susan Norton said the city is getting on solid ground with the center's operation after hiring Lainfiesta in September and Jumper in October. Administrators plan to work with Childress and the rest of the center's board this coming year on a management plan for the center, which will take into account the new features of the expansion, she said.

It will take some analysis to figure out whether $45,000 is the right dollar amount, and for what staff positions or purpose, Norton said.

"What we'd like to do is make sure we have a solid plan and a proper rapport before we ask for additional staffing," she said.

Council Member D'Andre Jones brought the issue up at Tuesday's meeting, saying he once served on the board for Friends of YRCC and had heard from residents about staffing concerns before. The center serves as a great opportunity to interrupt the challenges many young people face in the southeast part of the city, he said.

"I want the community to know the city is not overlooking their needs and concerns," Jones said.